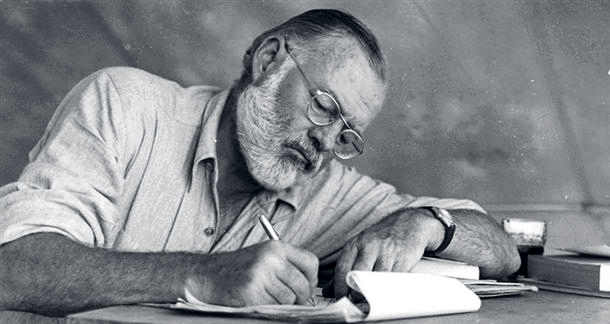 Rejection stories are common, but when we hear about a literary giant getting turned down it’s somehow more serious. I guess it just goes to prove they had to hone their skills like the rest of us. The rejection of an Ernest Hemingway story by Vanity Fair is just a milestone in his journey as a writer. But what doesn’t often happen is a second chance at the cherry. Nor does it normally take 90 years.

Vanity Fair’s editor-in-chief Graydon Carter asked the Hemingway Estate if he could publish "My Life in the Bull Ring with Donald Ogden Stewart", a story Hemingway wrote in 1924 around the time he was finishing up The Sun Also Rises and The Torrents of Spring. The estate said ‘no’.

Michael Katakis of the Hemingway Estate, told The Independent on Sunday: "We're very careful with unpublished material. The question is: 'If Hemingway were alive, would he want it published in a magazine like Vanity Fair, or would he want it relegated to a scholarly examination of how a writer was developing?' "

The five page story, about a socialite in Hemingway’s circles, is a slightly humorous tale where the titular character comes face-to-face with a bull. “My glasses flew in one direction, the cape in another, and I was tossed in the air amid a great gleeful shout.” Hemingway doing comedy? In Patrick Hemingway's own words:

Hemingway, believe it or not, could be humorous, and he modeled himself on Mark Twain. It's a story with 'cornball' American humour – but it's not of any literary value.

The story will see light of day, albeit not in the pages of a magazine: it’s due to be published in the Fall in The Letters of Ernest Hemingway: Volume 2, 1923-1925. Should it have been published in Vanity Fair after all these years? Probably not. Although it may well offer insight into the author’s coming of age, it does sound more like a scholarly oddity than something the public would want to read.

Ask The Agent: Rejections And Rude Agents... What To Do?