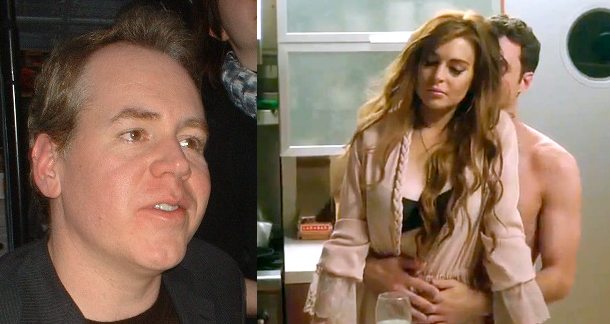 Apparently inspired by E.L. James’s Fifty Shades of Grey, the movie has been widely panned and turned down by both the SXSW and Sundance film festivals over “quality issues”. There are also rumors that Lohan’s behavior while filming continued to be erratic. It sounds like a strange project, even down to how it was funded.

It was partly funded by a Kickstarter campaign, through which they ultimately raised about $200,000. The suckers, err, contributors who gave $5,000 got the chance to have Bret Easton Ellis review their novel.

You can read the first of these reviews now, for Pablo D’Stair's novel Regard.

I’m not sure I’ll go out of my way to see this one, but I’m always intrigued when something like this happens. Is it really that bad? Maybe, maybe not. Will you be looking for it?

I have to admit that was a big BEE fan (both the books and movie adaptations) back when I was in college in the early 90's. But haven't really found his voice of late to be all that appealing as he seems a bit out of touch with things sadly enough.

Perhaps this is just most of our fates as we grow older and 'unhip' or whatever.

And I have no interest at all in seeing this film....

The Children of the Sun, Book One

I agree, his newer books have, well... there was a certain touch of weirdness and the unsettling in American Psycho, Less than Zero, and Rules of Attraction, and this wonderful nihilism that made it feel more real than supernatural.... but now there's too much of a supernatural element and a lack of character depth that I just find myself confused and uninterested in his novels.  Glamorama I gave away quickly in hopes of forgetting.  However, I have problems with letting go so I'm probably going to see the film praying he returns to his roots.

I wonder if any terrible authors donated so they could get reviewed. That would be awkward.

"Uh, thanks for the $5,000, but your book is really bad. Truly. I'm in awe of how poorly this book was written. Again, thanks for the money, but I would have paid you your money back just to keep you from showing this to me."

It's sadly underwhelming. I went in optimistic. I came out bleak, much like what is attempting to be portrayed. Maybe it's successful as a result of that?

Watch it if you want, but sadly it just has nothing to hold itself together. Too long at the start and too rushed at the end for a proper explanation of anything. Like why you should care. At all.

Mitchell Flanagan from Newburgh, New York is reading The Dubliners by James Joyce August 15, 2013 - 1:22am

I actually really enjoyed the movie and I'm not just saying that because I'm a big Ellis fan. I also helped fund the movie. The movie is a really good movie.

Dwayne from Cincinnati, Ohio (suburbs) is reading books that rotate to often to keep this updated August 15, 2013 - 2:50pm

I thought the film was okay. Okay like not turn it from cable if you are vegging out on the couch, but not pay a buck to rent a Redbox.