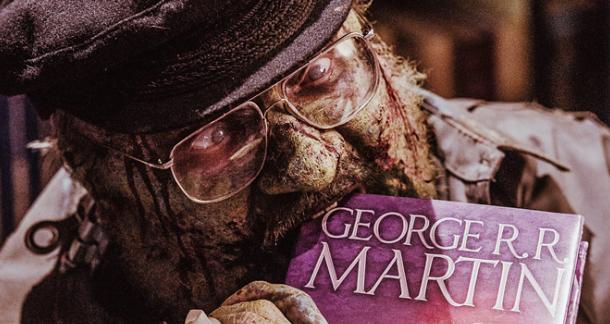 George R.R. Martin has been in the media a lot lately, particularly for the lengthy amount of time he’s taking to finish the latest book in the Song of Ice and Fire series. Now the author is striking back by showing readers not even death will stop him from completing the epic saga that inspired the HBO television show Game of Thrones.

How, you may ask? By getting zombified, of course!

Martin will appear in SyFy’s Z Nation as a member of the undead, reports Entertainment Weekly. During his cameo, he will be signing (or more accurately, chewing on) copies of A Promise of Spring—an obvious nod to the working title of the future, seventh installment in the Song of Ice and Fire series, A Dream of Spring.

In the eighth episode of Z Nation’s second season, the zombified Martin will be imprisoned and shackled to a desk by the Collector, an individual who captures celebrity zombies for his own entertainment.

“I just want to prove to my fans that even in the zombie apocalypse, the Song of Ice and Fire books will still come out!” Martin has stated of the cameo.

Here’s hoping Zombie Martin is as good of a writer as the living version!