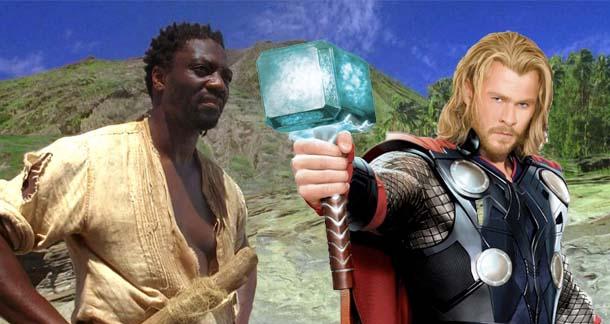 Warner Brothers has passed on Ron Howard and Brian Grazer's ambitious adaptation of Stephen King's Dark Tower series, which would have mixed movies and television to tell the story of Roland Deschain, the Gunslinger. Grazer and Howard, of course, have the option of taking this project elsewhere, but with Warner Brothers turning it down and Universal already having passed, things don't look good. Word around the block is that Media Rights Capital is in talks to finance the project. They're putting out District 9 director Neill Blomkamp's next movie, Elysium, so we know they have good taste. But things aren't looking good. Are you sad? [Deadline]

Twilight is almost over, so Summit is looking for another tween franchise with which to make billions of dollars. They're eyeing Divergent by Veronica Roth, a dystopian story where citizens are divided into classes aligned with virtues like honesty and bravery, or something. Neil Burger is in talks to take the director's chair. He directed Limitless, that movie with Bradley Cooper and Robert DeNiro that came out last year, which looked terrible, but apparently made a ton of money. Has anyone read this? Will it make a good movie? Will we be able to fill the Twilight-sized holes that will soon be left in our hearts? [/Film]

Adewale Akinnuoye-Agbaje, best known as Mr. Eko from Lost, though I will always know him as Adebisi from HBO's Oz, has signed on to play a villain in Thor: The Dark World. Akinnuoye-Agbaje will play a Dark Elf (it's actually a dual role of Algrim the Strong and Kurse... nerd alert!). He will join Christopher Eccleston (the Ninth Doctor... double nerd alert!), who is portraying Malekith the Accursed. This is great news, because Akinnuoye-Agbaje is great, and is far more formidable an opponent than Loki, who weighed 80 pounds. I liked the first Thor movie, despite it having no second act. If they can deliver a finished script, on top of this casting, this might be the greatest movie ever. Only question right now is: Will Akinnuoye-Agbaje utilize the scary Nigerian accent for which he is known, or his real British accent, which is actually sort of sweet and soothing? [io9]

Divergent is all the rage in YA circles right now, but would they really want to go with another dystopian? Seems like they should buy the rights, and keep it safe and sound until we've had a chance to come off the HGs high we're still on (and will be on until the dust settles on the 3rd movie). Personally, I'd like another Easy A type movie -- smart girl, biting voice, real world. I love me some fantasy, but between HG 2 and The Hobbit (plus another Snow White movie sans Kristen Stewart)...maybe we just need a good old fashioned buddy comedy w/ some sex.

I guess I'm not the audience since I haven't seen the Twilight stuff (or read it) except by accident, but I was pretty underwhelmed by Divergent. Started out really strong (some great concepts - many that would work nicely for film too) but it really falls apart toward the end (for me) enough so that I didn't bother with the second book. :(

Divergent was ok. I usually like dystopian, but the world in this book felt off or underdeveloped. A lot of people love it and there were entertaining parts. Maybe a film version will be better, because it will cut a lot of the filler and reduce some of the repetitive aspects into a montage or something :)

That sucks about the Dark Tower films. Hopefully it'll find another home with M.R.C.. One of my good friends is crazy about that series. And woohoo Chris Eccleston in Thor! Love seeing him in films.