Freebie Friday! "By the Nails of the Warpriest" by Nik Korpon 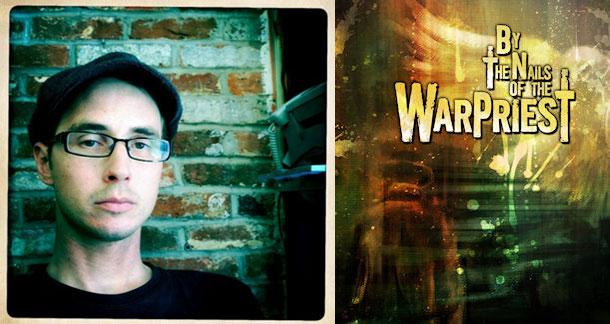 Hey, kiddos.  Want something to read over the weekend?

Well, we've got a little treat for you.  Nik Korpon, author of Stay God and Old Ghosts, is giving away his newest book for the price of on the house. If you're unfamiliar with Nik, his book, the aforementioned Stay God, was LitReactor's first official book club selection.  He's also been widely published, landing stories in Crime Factory, Needle Magazine (forthcoming), Black Heart Noir, Powder Burn Flash, 3:AM, Shotgun Honey, and a bunch more. Nik also has a bunch of awesome tats and has mad street cred in Baltimore, so don't mess with him.

Rife with political and religious undertones, By the Nails of the Warpriest follows an unnamed thief who steals memories from the elderly—those who have a vague memory of The City before The Struggle—and sells them to memory-junkies. He ekes out an existence by ruining the very souls he [once] tried to save. As a fallen leader of The People, he’s almost thankful that his family is not alive to witness the depths to which he’s sunk.

Then he finds a memory that suggests they weren’t killed in a riot, that someone lied to him. That someone wants to keep him from his family.

You can download By the Nails of the Warpriest in either MOBI or EPUB format by going HERE.

Act now: THIS DEAL WILL ONLY LAST FOR 24 HOURS!

Also, make sure you check out Stay God so you can participate in our book club.

Awesome, I just bought a Kindle too.

Stay God was amazing. This one will definitely be on my reading list.

derekberry from South Carolina is reading Eating Animals November 18, 2011 - 11:58am

First of all, I'd like to thank Korpon a lot. I hope this marketing method works out for him. But if I enjoy a book, I usually buy it too. So, sweet. By reading the synopsis, I'd say this might be pretty good.

Got it. You're full of awesome.

Sweet. I was planning to pick this up at some point anyhow.

Cheers, guys. Much of the credit should go to Al and Kyle at Blasted Heath. It was their idea. And I'd highly recommend checking out all of their authors. They're doing great things over there. Just finished ALL THE YOUNG WARRIORS by Anthony Neil Smith, which completely slays, and I'm ready to jump into Ray Banks' DEAD MONEY once I finish this Woodrell.

Got it. Korpon's writing career is going to be one to follow.

Hetch Litman from Somewhere in the mountains of the Pacific Northwest is reading The Violent Bear it Away by Flannery O'Connor November 20, 2011 - 9:05am

Aww man. I missed it

enjoying it so far...thanks! will def check out the other authors at Blasted Health