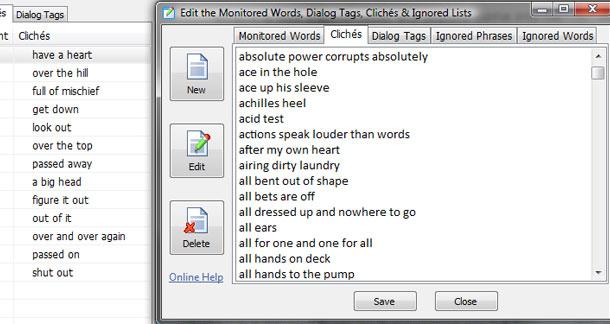 There are certain indisputable truths in this world: 1. You should never hire anyone who doesn't know "your" from "you're" or "their" from "there." 2. An ice pick to the brain is the only guaranteed way to permanently remove "Call Me Maybe" from your head—no matter how above such matters you think you are. 3. You have certain words and phrases that you use more often than most people, but you're not aware of it.

A recently revamped tool called SmartEdit cannot help you deal with #2, as it is software and not an ice pick, but it is useful for the others. The program by Bad Wolf Software goes a few steps beyond standard spelling and grammar checks by scanning your writing for clichés and overused phrases and words. It also gives you a running count on your dialog tags, provides you with a full list of those pesky adverbs so that you can determine whether any of them can be killed and replaced with stronger verbs, and allows you to set up custom monitors for your personal problem words.

The only downside is that SmartEdit is Windows only. (After years as a savvy Mac user, I jumped on a friend's PC for this and now understand how a caveman would feel if handed an iPhone.) The free program itself is beyond simple, though, and worth the time to install if you are a PC user. The tool would be even more useful for longer works, such as novels.

I pasted in a short story I've been working on and after the scan, which was almost instant, SmartEdit revealed that—outside of my character's names—my most frequently used word was "like," which might be something I should look into. I really thought my crutch word would be "really" because I'm all about stressing how. much. I. mean. every. thing.

Are you already aware of words or phrases that you use too often in your writing? Are they the same ones that you overuse in speech?

I am going to LOVE this software.  I bet "smile" is on the top of most lists.

Still, this is a great tool.  It's going to make rewriting funner.

For Mac users such as myself, it would be great to have a single piece of software to do all the work for us. I haven't found one yet that's free, but I do have a solution that works just as well. If you write in Pages, there's an excellent Proofreader function in the Edit dropdown menu. It combs through the text and makes suggestions about grammar, punctuation, and subsitutions for overused words.

Unfortunately, Pages doesn't track the frequency of every word in your manuscript, but there is a separate piece of freeware that does this marvelously. It bears the clever title of Word Counter, and you can download it here:http://download.cnet.com/Word-Counter/3000-2079_4-10214514.html?tag=mncol;1 (don't worry, it's safe). Copy and paste your text into the field, then go to the Window dropdown menu and select Show Word Frequency. Next, hit the count button, and every word and its corresponding frequency appears in the window. You can sort by word, frequency, and length.

It's an extra step, but until a developer makes softare like SmartEdit for Mac, this is the best solution I've found for us destitute writers.

Howie--your comment is priceless because it was your review of my most recent submission that has made me reread all my works in progress and delete all the maniacs smiling throughout my stories.

I need this software for Mac. Terribly.

I'm probably just a crabby old man that thinks everyone should get off my lawn and stop smiling so much.  I hate it when people are having fun.