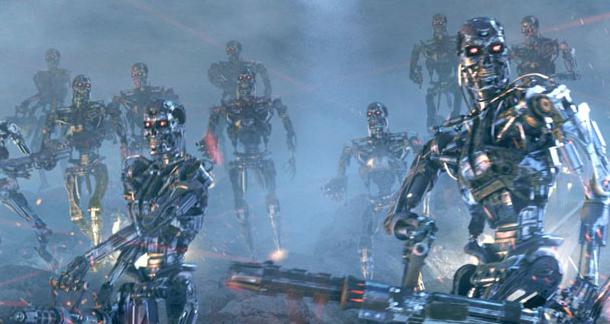 It wasn't enough that computers have eliminated the need for assembly line workers and bank tellers and that lady who used to check me out at the grocery store before she got replaced by a scanning kiosk. Now they're coming for the writers.

Narrative Science uses data sources to create stories in multiple formats, including long-form stories, headlines, tweets and industry reports. I'm not even kidding about this. Here's a report from Forbes, excerpted on Galleycat, that was written by a computer program:

While company shares have dropped 17.2% over the last three months to close at $13.72 on February 15, 2012, Barnes & Noble (BKS) is hoping it can break the slide with solid third quarter results when it releases its earnings on Tuesday, February 21, 2012.

What to Expect: The Wall Street consensus is $1.01 per share, up 1% from a year ago when Barnes & Noble reported earnings of $1 per share.

The consensus estimate is down from three months ago when it was $1.42, but is unchanged over the past month. Analysts are projecting a loss of $1.09 per share for the fiscal year.

It's not Shakespeare, but it's a narrative.

This scares me. It's bad enough the machines are controlling our food production and our computer networks. Now they're controlling what we read?

Skynet is becoming aware. Don't believe me? There was a good documentary about this a few years ago: Terminator 2: Judgment Day. Check it out.

Joshua Chaplinsky from New York is reading a lot more during the quarantine February 20, 2012 - 5:20pm

If only they found a way to make computer-generated blog comments...

Joshua Chaplinsky from New York is reading a lot more during the quarantine February 21, 2012 - 7:37am

Yes, but who is responsible when one computer steals another computer's content to write its story?

misterwoe from Kansas but living in Athens, Greece is reading Perdido Street Station by China Mieville, Inside the Third Reich by Albert Speer, A Wolverine is Eating My Leg by Tim Cahill February 21, 2012 - 8:20am

Kasey from the morally and physically challenging plains of Texas is reading 12pt. Courier font February 21, 2012 - 8:27am

In truth, the people who write newsfeeds and APwire stuff have been "computers" for a decade or so now... And the money they get for that kind of writing typically hovers just above the minimum for text brokers/blog fodder, so they were hungry to begin with, i.e. if computer replacement takes over, think of it as a mercy killing.  If anything the grammar will get better and translation of these types of bites/bytes will be instantaneous.

I hope the computers aren't using a system based off Google's Captcha2, because I'm not their slave and always type in a dirty word for the one they are trying to get humans to decipher.

When google prints stuff and it has cuss words in it, that was me.

aren't these computers just stealing content and writing from someplace else?

So it's computer software inserting data into syntax. Not so new. Will it pass the Turing test? No.