First Trailer for 'The Hobbit: The Desolation of Smaug' 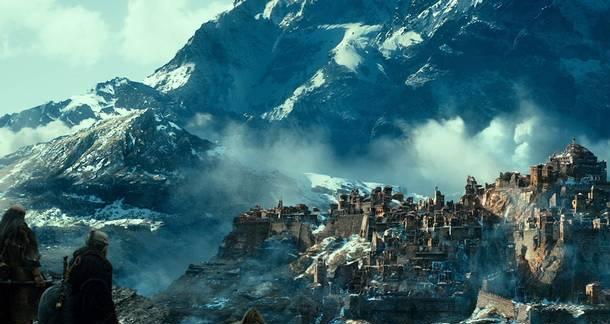 Well, it's here. No, not Christmas. And no, not the end of the world, either. It's the first glimpse of the second Hobbit movie - The Desolation Of Smaug, which was released online yesterday, prior to a cinema release this Thursday (before Man of Steel, if you're interested).

The second of three movies that Peter Jackson's stretched the story into, Smaug picks up where last year's An Unexpected Journey left off. You can guess from the title who it features, I'm sure. Yep, Smaug, the evil dragon who lives in the Lonely Mountain. "Voiced and motion-captured" by Benedict Cumberbatch (Star Trek Into Darkness and Sherlock) - and it looks great!

Also starring the usual suspects, Sir Ian McKellen, Martin Freeman, Orlando Bloom(!), Evangeline Lilly(!!) and Richard Armitage, the movie's out on the 13th of December. If you can't wait, here's your first look.

Odd that they would include Legolas here since he's not in The Hobbit, but I'm not wholy bothered by that. I love seeing the barrel scene and the giant spiders, so it should be fun. Then again, I'm not one of those purist-sticklers about movies straying some from their book origins, so long as the tone is maintained. I read The Hobbit a few months before An Unexpected Journey came out, and enjoyed it quite a bit despite the obvious deviations and attempts to link it to LOTR. Hope the second one continues the trend.

I have no problem with Legolas being featured. He's the son of the elf king who did appear in the book so it stands to reason he would have been present for the events of The Hobbit.

Joshua Chaplinsky from New York is reading a lot more during the quarantine June 13, 2013 - 7:23am

@Dino: Agreed. Can't wait for the barrels and the spiders, two of my favorite parts of The Hobbit. And Smaug looks HUGE.