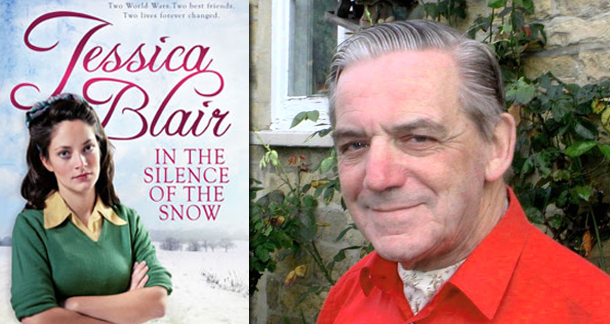 Over the years, one of the tenets for new writers has been ‘write romance novels — they sell’. I always thought this was a slightly dodgy proposition for men, but hey, who am I to argue? I even went so far as to buy one of those ‘How to Write a Romance Novel’ kits, but nothing ever came of it.

So meet Bill Spence: he’s 89 years old, a war hero from Ampleforth, North Yorkshire, in England, and the author of 22 romance novels (his latest, In the Silence of the Snow, comes out shortly).  When he approached a publisher for his books, he was told they wouldn’t sell unless it looked like he was a woman, so Jessica Blair was born.

He said: 'You do not say no to publishers. I was just very glad I had found someone who wanted to print my books, and it didn't bother me at all that I'd been given a female name.'

While some of the press at the time knew he’d written westerns before, it seems that his true identity has only just come out. His late wife, Joan, although supportive, thought it was funny.

This isn’t his first rodeo: after his time in the Royal Air Force, he wrote a series of successful westerns between 1960 and 1993, publishing 36 in total. After writing a non-fiction book on whaling in the 80s, he decided to write a novel on the same subject and his romance novel career was born.

His story brings to mind one of the characters in Margaret Atwood’s book Lady Oracle (well worth a read), about a woman whose mentor in romance novels is a Polish Count who makes a reasonable living out of writing the books.

Ladies, does it matter to you if the romance novel you are reading was written by a man?

I don't read romance, so perhaps I'm not fit to answer this question, BUT I don't think it would bother me at all. He was discriminated against. THAT bothers me.

Carly Berg from USA is reading Story Prompts That Work by Carly Berg is now available at Amazon February 7, 2013 - 1:45pm

Interesting. I would think women would rather read romances written by men, if anything. But I don't read them either, so I dunno.

As long as it isn't Nicholas Sparks, I'm down. I hate Nick Sparks, and his formulaic, elementary writing. I don't really read Romance either, but I have read a few in the past. I gave them a try, when I was in high schoo,l and decided I'd rather read Anne Rice books and Harry Potter.

I read Romance, and I think it doesn't matter if the author is male o female, if the story makes me have strong feelings, its a good, and I appreciate that.

I think it's funny that 3/4ths of the comments are from people who don't read romance.  I read most genres and really enjoy Regency Romances.  I haven't read this particular author, but the fact that he is a male wouldn't deter me necessarly.  It seems no one could tell from his writing that he was male so that's a big plus.  I have read some "romances" written by men and ... they aren't the same.  They have the female characters focusing on things that most women don't, among  a host of other problems (maybe they were just poor authors in general).

So I guess as long as I can't tell it's written by a man (meaning writing unbelievable female characters) while I'm reading it it wouldn't matter.  It would actually impress me.  Like Iientsu said, if it's good it's a good.  I'm going to have to check out this Bill "Jessica Blair" Spence fella :)