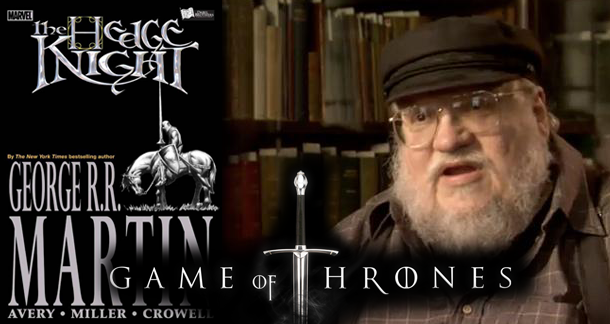 Seen the first two series of Game of Thrones? Well, with the third series almost out, author George R.R. Martin revealed in an interview with IGN that there has been talk with HBO about a series predating the action, based on his Dunk and Egg novellas.

G.O.T. is a short series, with only 10 episodes per season. That’s not a lot — less than half an average series — and the reaction when a season finishes suggests the fans would like more. As it’s successful, HBO’s thinking about obliging. At least, so says Martin.

Well, I have been writing for a number of years a series of novellas set in the same world, the world of Westeros, but a hundred years earlier, about two characters called Dunk and Egg. And I published three of those novellas, The Hedge Knight, The Sworn Sword, and The Mystery Knight, and I have in mind about nine or ten more novellas about the adventures of Dunk and Egg. So we have been playing with the idea of doing those as prequels… They’re somewhat lighter in tone than the main series, a little more adventurous. But my fans love them and I love the two characters too, and it all ties into Westeros history. So maybe that will be what we’ll do.

So, that sounds positive, although it probably still won’t be enough for all the fans. IGN did make sure Martin meant it would be another series, to which he responded “Yeah. Yeah.” Interested? I could be. Will I watch it? Most likely. What about you?

Joshua Chaplinsky from New York is reading a lot more during the quarantine March 23, 2013 - 8:46am

If the quality is there, I wants it.

I think it will be interesting to see the story of Targaryens before they came to Westeros, but I'm not sure how much there is left to tell about them. I guess we'll find out! Now, I have to visit https://www.dissertation-service.org/medical-dissertation/ site to get medical dissertation writing services to complete my assignments.