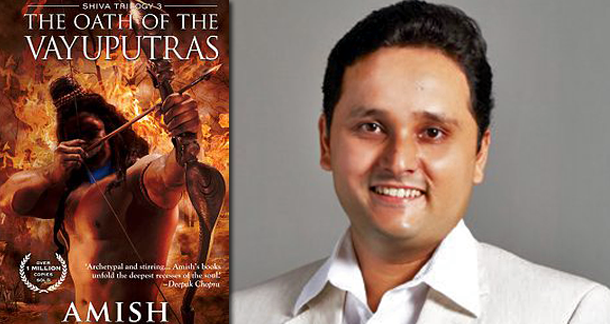 It’s the sort of thing we novelists dream about: our next book or books get commissioned by a publisher and a seven-figure advance hits our bank account. Fairy story, right? Well, not for one Indian author named Amish Tripathi. His publisher, Gautam Padmanabhan, has given him the largest advance from an Indian publisher ever: a cool $1 million for a three book epic based on Hindu myths.

Tripathi’s latest book Oath of the Vayaputras — a 600-page tome — had just launched last week when the news of the deal broke. A “former banker turned bestselling novelist”, Tripathi hasn’t even started the series yet, and won’t until he finishes promoting Oath…

I have four or five ideas and I'm not sure which one I'll develop. But my first three works have now sold over 1.5m copies and brought in more than 400m rupees in sales (£5m), which I'm told is pretty good," said Tripathi, 38.

Tripathi is riding a current wave of novels that remix Hindu myths. His first three books feature “a ‘re-imagined’ account of the life of the god Shiva,” who speaks Indian street slang and uses Americanisms. The books have become cult classics, launched by stars of Bollywood, and include a music-based campaign with accompanying CD. And Tripathi published the first volume himself. An imminent US version follows a UK edition and a film.

There’s criticism (of course) about the amount, with one pundit claiming “…Indians don’t read books…” but others think Tripathi has shown a penchant for striking a chord with Indian readers. Namita Gokhale, author, publisher and organiser of the Jaipur literary festival, said Tripathi had got it right. "Western myths are static but the gods are alive in India and for thousands of years have been continuously reinterpreted," said Gokhale.

I do wonder if that kind of advance is warranted for authors; we’ve seen a few recently, and I guess they’re not likely to go away any time soon.