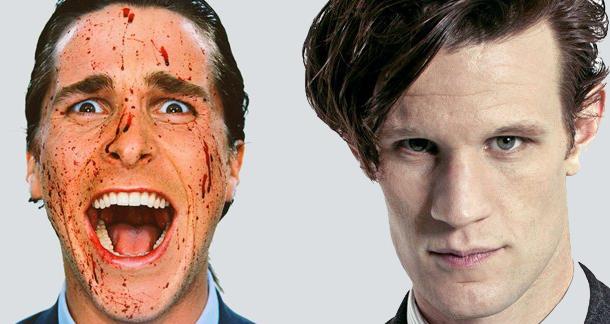 Doctor Who star Matt Smith will portray Patrick Bateman in a musical adaptation of Bret Easton Ellis' American Psycho. The show is due to open at the Almeida Theatre in Islington in December. If it finds an audience, it could move to the West End, and eventually Broadway.

Smith's last appearance as the Doctor will be this year's Christmas special, in which he'll pass the famed sonic screwdriver on to Peter Capaldi.

For the non-Who nerds out there, the Doctor is a 900-year-old Time Lord who regenerates into a new person when he dies—which is why the show has been on and off the BBC since 1963. The Doctor is also a cross between an old man and a big, goofy kid; dashing, funny, running around the universe saving worlds. So it'll be interesting to see Smith, a fantastic actor who imbued the role with a lot of warmth, move on to the murderous, business-card obsessed Patrick Bateman.

(I know I'm going to invite a lot of derision by saying this, but I think Smith was a better Doctor than David Tennant—Smith was the youngest actor to ever take the role, but he really nailed the mix of exuberance and melancholy required for it.)

As for the musical, I have high hopes. Handled right, it could be a lot of fun. I've got my fingers crossed that the first few rows will get ponchos for blood splatter. And, hey, even if the show is a disaster I'll still see it, because it's a musical adaptation of American Psycho, and I don't even have a choice in the matter.

Funny, though, that the titular character in American Psycho will, again, be portrayed by a Brit.

Whovians, what do you think of the casting? Intrigued?

What do the non-nerds in the audience think?

Columnists nowadays just say that Matt was a better Doctor than David just to get a reaction. Its pretty pathetic. They were just different. The correct thing would be to say " I preffer 11th over 10th".

Ivan, you're my kind of nerd.

Smith and Tennant are tied, I guess, if there is really even a competition. They both handled the character extremely well. I've seen Smith in other things, "Womb" and "Charles and His Kind," and can vouch he's an incredible actor with a lot of emotional depth and diversity. So, yeah, him playing Patrick Bateman in the sickest idea for a musical ever sounds delightful.

Nothing against Smith, but Patrick is supposed to be good looking and full of himself. I do not see any of that on Smith.

I just finished a lead role in the musical Godspell, as a freshman in highschool. I did not know Smith did these kinds of things but I did love him as The Doctor. He was by far my favorite Doctor yet. I am excited to see him perform in a musical.