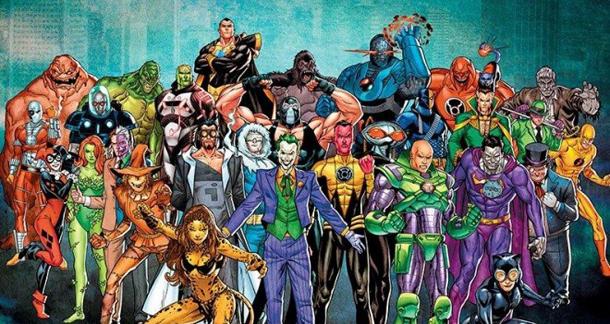 As the title indicates, the documentary will explore the "compelling, diverse and legendary society of supervillains" of the publisher's universe, and will feature interviews with comic writers and some of the characters' creators. Narration will be provided by Christopher Lee, who's played everyone from Saruman in the LOTR Trilogy to Sherlock Holmes, Frankensteins's monster, and Dracula (he's also in the original Wicker Man, a ton of Tim Burton movies, and every movie ever made).

Chief creative officer at DC Geoff Johns spoke at length about the new film in a statement:

DC Comics is known for many things, but chief among them is the compelling, diverse and legendary society of supervillains who populate its universe. From the monstrous Solomon Grundy to the brutal Black Adam to the charismatic Sinestro, there is no single greater collection of villainy in all of fiction. These villains are hugely popular comic book characters in their own right and, quite honestly, many are often times more popular than some of our iconic superheroes.

Production begins this weekend at WonderCon in Anaheim, CA, where fans dressed as their favorite supervillain can participate in the filming. If you're going to be there and you've conveniently dressed up like the Joker, head over to the DC booth (#801) at 10:30 AM on Saturday March 30th, flail your arms, and scream, "Pick me, pick me!!!!"

Who's excited to see this film? I think it's high time we had a serious examination of villains, since without them, the superheroes wouldn't be necessary.

Perhaps DC should start making movies around supervillains instead of superheroes. Might be where their real strength lies: instead of trying to re-invent their iconic superheroes for a new audience, they could explore the trials, tribulations, growth, and inevitable fall of their villains--who wouldn't have all that baggage attached to them that many of the superheroes have.

Ghostword from Cornwall is reading The Land of Laughs by Jonathan Carroll March 27, 2013 - 9:10am

Ghostword from Cornwall is reading The Land of Laughs by Jonathan Carroll March 27, 2013 - 9:11am