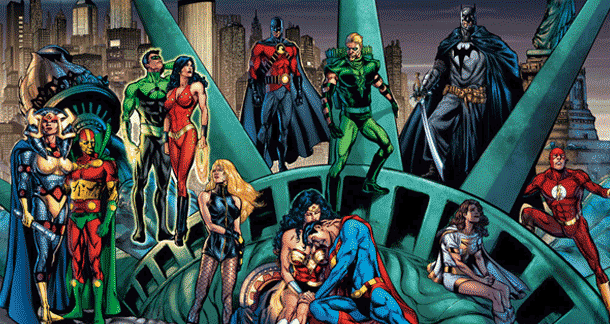 After a controversial deal with Amazon last year saw its physical titles pulled from Barnes and Noble’s shelves, DC Comics has announced new plans to release its monthly titles like Batman, Wonder Woman and Superman through Amazon, Apple and Barnes and Noble.

Last year, Barnes and Noble pulled physical copies of DC Comics’ graphic novels from its shelves after the comic book giant announced a deal with Amazon to publish its graphic novels (like Watchmen and V for Vendetta), so these plans should smooth over past mistakes. It’s also part of the company’s ongoing digital strategy.

As e-readers and tablets continue to explode in popularity, it’s important for us to offer consumers convenience and choice in how they download digital comics and graphic novels,” DC Entertainment co-publisher Jim Lee said in the release, “and these new distribution deals with the top three e-bookstores do just that.”

The decision to launch on the three competing platforms reflects the statistics that their users have large numbers of different files on their tablets - and a whole new market for the comics.

Sounds like a good plan-- and now I can get Batman on my iPad! Will this entice new readers to comic books? Time will tell.

When will the comics be free with adds? When will they be the way MOST comics are? When will the resemble broadcast mediums? I speak for most comics readers, I think, when I say 'If I am going to pay for the content I want a physical copy to confirm my purchase.'