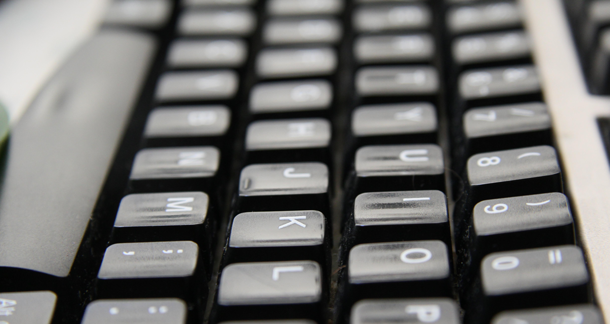 Your 12-year-old can text faster than most of us can speak, right? Well, according to a new report in the Boston Globe it’s not all going according to plan. Where typing skills used to be taught in middle school or high school (does anyone remember those old typewriters? No? Just me?), because of changes to the way kids will be tested in future, schools in America are rushing to teach children as young as four typing skills — because they’re going to need them.

But — and it’s a big ‘but’ — they’re struggling to move from the tap and swipe environment found on tablets and smartphones to a full-size QWERTY keyboard. Frankly their fingers aren’t quite long enough to learn these skills easily.

Most elementary-age children are digital natives, comfortable with smartphones and tablets. But they often operate those hand-held devices with a swipe of a finger. They have a much more difficult time trying to compose text on a keyboard, according to their teachers.

The rush to teach them how to type is solely predicated on the idea of testing them for the ‘Common Core Assessments’ in the next few years via computers with keyboards.

Children must learn touch typing — the ability to compose text without looking at keys — so they can focus on their writing, said Kathleen Regan, the director of curriculum and instruction at New Jersey’s Glen Rock Public Schools. She calls it a ‘‘fluency skill’’ akin to memorizing the multiplication tables in order to more quickly perform complex mathematics. ‘‘On the Common Core assessments, some of these writings are going to be document-based questions or sorting through different types of text,’’ she said. ‘‘The last thing you want is for the kids to be struggling with the mechanical skills.”

While it’s been proven that the earlier children learn things the more likely they are to pick them up (hence the fluidity of tablet use) there could be serious issues with trying to force these kids to learn touch typing at such an early age — I think the debate on when to teach them these skills is likely to continue for a while. I do wonder how I’d ever have been able to do any jobs in my career, much less write a simple article, without the ability to touch type. Do we need to consider alternative technologies, like tablets, for testing our children’s composition abilities? We don’t even know how technology is likely to change in the next ten years! Or is it right that they work through the pain of stretching their little fingers to reach all those keys?

I'm twenty years old, so I didn't grow up with the touch screens and the iPads, but there were plenty of computers around. Every Tuesday and Thursday starting in 2nd grade we had computer class, where we played learning games like Treasure Mathstorm and Logical Journey of the Zoombinis, and random games that helped us learn to type. By 4th grade I could type as fast as my mom. I loved computer class, and actively looked forward to Tuesdays and Thursdays. When I got into high school I was downright shocked that people were taking typing classes when I could type around 70wpm.

I think the little kiddies will be fine.

Only one of two things can come out of this.

Either we find a way to GET THESE KIDS TOUCH-TYPING before 2016...

Or we encounter a situation unlike any other our species has ever had to tackle before: all the world's keyboards, having become obsolete like so many other formerly essential technological innovations, come together in an endless daisy-chain of letters spread out across the wasteland of, say, Omaha, their keys intermingling according to some kind of intelligent design, to spell, collectively, a final judgement upon our vanity.

Joshua Chaplinsky from New York is reading a lot more during the quarantine October 22, 2013 - 9:47am

I feel like the skill of typing is still extremely relevant in this day and age and I don't know how anyone will get anywhere in the workforce without it.