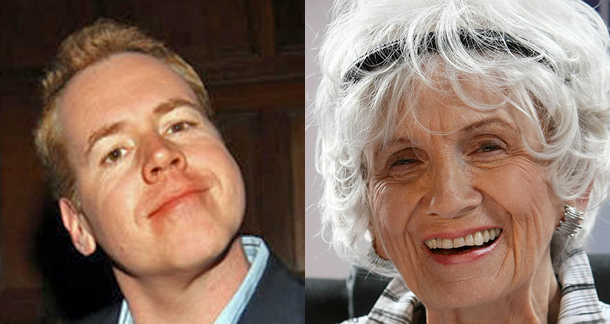 Bret Easton Ellis isn’t happy. I know, so what’s new? Well, it’s another year, and with it comes another Nobel Prize for Literature. The choice has been welcomed by some and reviled by others. No one seems to have taken more offense than Bret Easton Ellis, who took to the Twitterverse on Friday to denounce the decision.

"Alice Munro is so completely overrated," he wrote. "Alice Munro was always an overrated writer and now that she's won the Nobel she always will be. The Nobel is a joke and has been for ages."

His complaints are not a surprise as, for example, he’s previously said David Foster Wallace is "the most tedious, overrated, tortured, pretentious writer of my generation.” Ellis also described blockbuster Gravity as "totally boring”.

It’s not just him, though, as Christian Lorentzen agreed, retweeting Ellis with “Amen” tacked on. A reviewer for the London Review of Books, Lorentzen savaged Munro's last short story collection, Dear Life.

Over a career now in its sixth decade, she's rehearsed the same themes again and again, but that's because she’s a master of variation. She has preternatural powers of sympathy and empathy, but she’s never sentimental.

He did profit from her win, collecting £400 (around $630) from a bet that Munro would win the Nobel. I guess it just goes to show you can’t please all of the people all of the time. Did Munro deserve the Nobel? Does anyone “deserve” these prizes?

In Defence of Snark: Why Dark Humour Can Save Your Life

Ryan Hartman from Philadelphia is reading The Neverending Story by Michael Ende October 14, 2013 - 10:55am

Mr. Ellis reminds me of the way Truman Capote acted when he stopped writing and started buffooning on TV talk shows.

I agree with Bret Easton Ellis. The Nobel committee and Canada overlooks its real talent, and favours hacks like Munro and Atwood. Munro has spent 6 decades rewriting the same stories, and themes, and never adding anything valuable onto the newest reiteration of her own ideas. She hasn't grown as a writer, except that her prose gets better, but the stories are all the same. Boring. Ellis was correct in his summation of Munro.

I am a Canadian and believe Alice Munro to be undeserving of a Nobel for her tedious brand of literature and the shallow emotions one feels reading her works.

I am American and think BEE is a fan of no one but himself.

If it had to go to a Canadian, I'd give it to Joe Boyden.