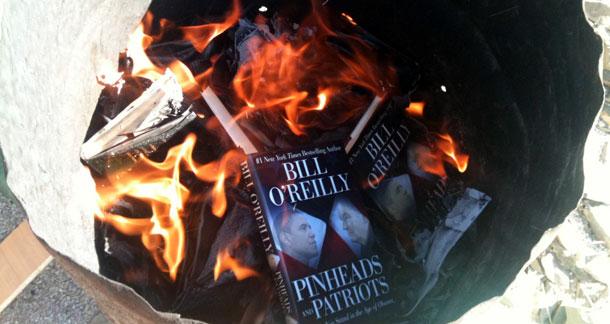 Via: The Hollywood Reporter

If you've ever put together a care package to send your buddy overseas, then you already know they're a fan of simple creature comforts: Twinkies, Playboy, the new T.I. CD, and maybe a decent bar of soap (actual quote: "Dude, send me some Dove or something. I smell like a camel skunked me.")  As I've been told many times, the desert isn't a fun place to be.  It's hot.  Long periods of inactivity aren't uncommon, depending on where you're stationed.  It's also rather alien, so you'd be surprised how a little taste of home can lift a soldier's spirits, and it's these small gestures that make them remember exactly what they're fighting for.

Books are also nice.  Jarhead and anything by Tucker Max are big frontrunners.  Chad Kultgen is popular too. Basically, any paperback that keeps it light tends to go over well with the troops.

Then there's Pinheads and Patriots by Bill O'Reilly.  Probably not exactly what they were looking for, and that's putting it lightly.  This much can be surmised by the photos of the book being used as firewood as per this soldier's Tumblr post.

Some jerk sent us two boxes of this awful book (SPOILER ALERT: George Washington - Patriot; George Soros - Pinhead) instead of anything soldiers at a remote outpost in Afghanistan might need, like, say, food or soap. Just burned the whole lot of them on my Commander’s orders.

Pretty harsh, but I suppose this gets the point across better than giving the book a one-star review on Amazon.

Mr. O'Reilly, next time you decide to be "generous," consider some gifts that aren't fueled by your own political agenda. I think your bank account can handle some toothpaste and clean shirts.

Well I'm an outsider looking in here, but all the evidence I've seen suggests Bill O Reilly is a special flavour of dumb.

I've seen a few of his 'interviews.' The guy is a twat.

What is funny to me is how when you take guys like Bill out of his element, he often comes across as pretty likable. Whenever he's on The Daily Show, he's a great guest. He has good debate with John and has a good sense of humor.

A certain percentage of a pundit's job is to play to what the audience expects. Sad as that may be.

So these were definitely sent by Bill O'Reilly (or his representatives) or is Mr. Tietz just extrapolating from the reference to "some jerk" in the soldier's post? Seems like a bit of a jump to just assume the author was the source. If Mr. Tietz tracked down the source of the books he probably should have mentioned it so people won't get the idea that he's pushing his own political agenda. Plus it would help to determine the level of journalistic integrity to expect from LitReactor and Mr. Tietz.

Joshua Chaplinsky from New York is reading a lot more during the quarantine October 20, 2011 - 2:18pm

Well, if you watch the video in the Hollywood Reporter link, it clearly shows some form of the book (an audio version?) being included in Operation Shoebox packages to troops.

Also, he ran a promotion where every $26 dollars you spent at his American Patriot Shop, he sent a copy of his book to a soldier on the front lines.

And just for the sake of clarity, does this mean that LitReactor advocates the burning of books? You'd think there would be at least a mention of the offensiveness of seeing any book being burned regardless of someone's opinion of it.

Joshua Chaplinsky from New York is reading a lot more during the quarantine October 20, 2011 - 3:05pm

I see what you did there.

Class Director
Rob from New York City is reading at a fast enough pace it would be cumbersome to update this October 20, 2011 - 3:41pm

BOOOOO. Tietz writes about politics and it spurs intellectual discussion. I write about it and I get the snot kicked out of me. What's up with that, dude? You payin' these people off or something?

Joshua Chaplinsky from New York is reading a lot more during the quarantine October 20, 2011 - 3:55pm

Dude, did you SEE the drubbing Brandon is taking over on the Tyra post?

Instag8r from Residing in Parker, CO but originally from WV is reading Blood Meridian by Cormac McCarthy October 20, 2011 - 6:55pm

If you're a history buff or a fan of President Lincoln his new book KILLING LINCOLN is a must read.

In the desert, some nights are particularly cold, I imagine. Then burning books would be the moral thing to do, like canibalizing dead people when you're stranded someplace.

Dwayne from Cincinnati, Ohio (suburbs) is reading books that rotate to often to keep this updated October 21, 2011 - 9:28am

@Rob - I'm sorry if you felt personally attacked by my coments, I stand by them that wasn't my intent. I left comments on your work but not this article, because I see the relationship to being a writer from this piece. Authors (and aspiring authors) should be aware of their own assumptions regarding who does and doesn't read a work, more so with people who are being denied what they think of as basic parts of life.

Further this article was confined to Bill O'Riely the author (his works and what he did with them). It portrayed his actions as bad because of things he did as a rich writer. It didn't imply that his misstep had anything to do with him being a conservative.

Daniel Donche from Seattle is reading Transubstantiate, by Richard Thomas October 21, 2011 - 10:59am

I went to Afghanistan twice and Iraq once and I'd say the thing that sucks the most was that people always, ALWAYS sent over the books that nobody would ever read. Shit you wouldn't pay 5 cents for at a garage sale. But occasionally you'd drop in at some other place and come across a giant bookshelf and people would wonder why I spent an hour checking the entire thing to see if there was anything good. I lifted Fear and Loathing that way. I don't get why the commander would have ordered the books burned, though. Most (but obviously not all) are reasonable.

@ Daniel - could it be that the commander saw the gesture of sending someone's own books to troops as an attempt at indoctrination? Is that against army policies? (I just wonder - I don't know). I would see that as making sense if the commander may think that if people read and agree, they may become less likely to follow orders (if the book is critical of the one who is commander in chief at the time?). Maybe I'm just rationalizing when in fact the commander might have simply been annoyed by books that are against his own views?

Also, you make me want to send a box of Palahniuk books to Afghanistan!

Joshua Chaplinsky from New York is reading a lot more during the quarantine October 21, 2011 - 5:09pm

From the HR article:

The blogger later clarified that the Fox News personality's work was not set ablaze because of political reasons, but because they were impractical in combat: "The motivation behind the order to burn them was not political. As mentioned in the original post, we are in an extraordinarily remote location....

"Extra space is scarce and alternatives that a few mentioned, like recycling, are nonexistent. All waste is burned on the base and in town.... I was getting rid of a bunch of cardboard boxes and the books were in the burn pile... I’m aware of the historical implications of book-burning. I won’t say I didn’t take pleasure in removing a few copies of this bigoted twerp’s writings from circulation, but the reason for doing so was military necessity."