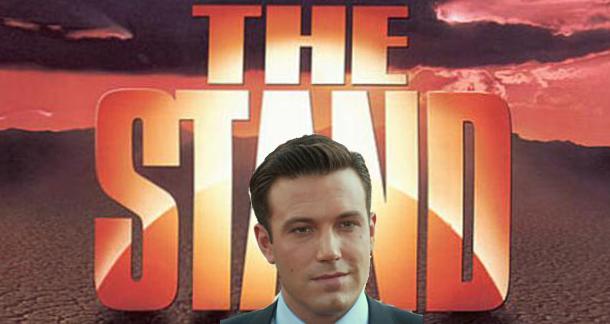 It looks like the remake/re-adaptation of Stephen King's epic novel The Stand may have a director: Ben Affleck. The guy who consented to star in Gigli.

Kidding aside, Warner Brothers is reportedly interested in getting him on board, and he's not a bad choice! I loved Gone Baby Gone, where he demonstrated convincing character development and a keen eye for casting. And I haven't seen The Town, but I hear good things. A post-apocalyptic wasteland is a big step up from Boston (or is it?!), but I think Affleck has earned some good will.

Whatever he comes up with, it can't be any worse than the 1994 TV miniseries, which started off pretty strong before spiraling into a complete mess. I mean, that's me. Maybe you liked it. I didn't, so unless Affleck turns it into a musical starring Katy Perry, then it stands a good chance of being better.

The Stand is about a plague that devastates the planet, with the survivors drawn into a showdown between good and evil. The book was first released in 1978, before being reissued in 1990 as an "uncut" version, featuring material King had previously eliminated for the sake of brevity.

Affleck is currently directing Argo, about a CIA operative and a Hollywood makeup artist creating a fake movie to smuggle Americans out of Iran during the 1979 Tehran hostage crisis. So we don't have a sense of anything much, like if he's even definitely signed on or when the movie will start shooting or if Affleck will find a role for the star of the TV miniseries, Gary Sinise (yes please).

So let's start speculation about a cast! Affleck has worked with some pretty good and/or fun actors, but according to a cursory search of IMDB, only one has appeared in all three of his movies: Titus Welliver.

You heard it here first. The smoke monster from Lost will be Randall Flagg in Ben Affleck's The Stand.

The Town is the shit.

As long as they dont try to adapt the Dark Tower books, I don't care what they do.

Joshua Chaplinsky from New York is reading a lot more during the quarantine October 24, 2011 - 7:38am

Ron Howard's multiple film and television season adaptation of The Dark Tower series is in turnaround because it was too expensive, but they are still shopping it around, and there's a good chance it happens eventually. When I heard Howard was gonna direct I was like, what the eff?, but then I remembered Willow and I was like, hm... maybe.

As for Ben, I haven't seen them, but hear tell both his flicks were competently made. The question is, can he handle something of this scope? I'm not as outraged by this idea as I would have been pre director Ben, but maybe the studio should hedge their bets and just hire Frank Darabont. I heard he's looking for a job.

Keith from Phoenix, AZ is reading Growing Up Dead in Texas by Stephen Graham Jones October 24, 2011 - 7:47am

I'll agree with Brandon, The Town is the shit. I think Affleck would be a great choice as a director for this project because of his obvious love for New England based writers and his ability to adapt novels without completely butchering them

I thought David Yates or whoever it was that directed the last Harry Potter flicks was up for either The Stand or Dark Tower? I wouldn't totally be against that idea.

Totally on board.  The Town was amazing, and Gone Baby Gone was good.  Also, pretty excited to see this get re-made with CGI where appropriate.

Daniel Day Lewis wouldn't be a bad choice for Roland either. As for Affleck, the Town was amazing and quite suprising. I'm not a big fan but I think he could do it. Just please make it three hours. Craming everything into only two just seems crazy. Not that three is much better, but it is.

Joshua Chaplinsky from New York is reading a lot more during the quarantine October 24, 2011 - 5:15pm

I think the plan is to make it three separate films.

Re: The Dark Tower, lo and behold, THIS just popped up today.

laurelin gilmore from Sacramento is reading Tropic of Cancer October 25, 2011 - 1:32am

Javier Bardem for Roland?  I did not know.  I...think...yes.  As for the Stand, it would be great to see Gary Sinise back in some capcity, but he's probably too old for the same role.  Since Ben Affleck may be directing, I would love to see Jeremy Renner in it somewhere.  He's been amazing in pretty much everything, including his five second cameo in Thor.