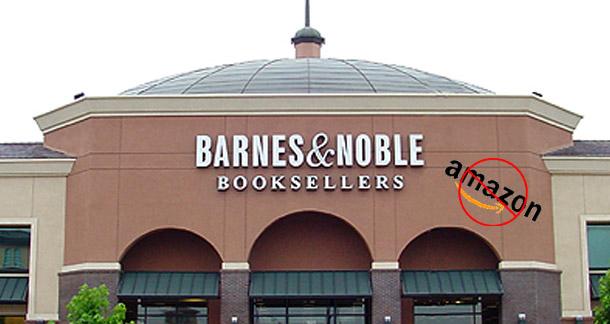 And the publishing wars rage on...

In the latest volley, Barnes & Noble stores were found to be stocking books put out by Amazon Publishing, like My Mother Was Nuts by Penny Marshall. This, after the company insisted it would do no such thing. The company has since sent an e-mail to all stores, asking them to remove any and all titles published by Amazon.

According to paidContent, individual branches have a fair bit of leeway when it comes to what they order, so Amazon titles were slipping through the cracks:

Moby Lives, a blog operated by independent publisher Melville House, first saw My Mother Was Nuts on a display table in a Manhattan Barnes & Noble. I turned up other copies in stores around Manhattan (and they are still there this morning). paidContent readers reported seeing the book in Barnes & Noble stores in Chicago, Indiana and New Hampshire. Melville House executive editor Kelly Burdick found it in Seattle, San Francisco, Chicago, Louisville, Washington DC, and Boston.

What do you think? Is it sour grapes on the part of Barnes & Noble? Are they leaving money on the table? Or do they have every right to freeze out a company that's undercutting them?

I understand why they are doing this. The book business is about making money and it should be, because that is the point in a bookstore exisiting. However, they are not even trying to compete with Amazon on book prices. It costs a fortune to buy a book from B&N and more recently it has been difficult to find the books I'm looking for. Every time I have been to B&N, in the past two years, they didn't have the new release I wanted. It wasn't in the front on their new release shelves and it wasn't in it's genre section either. Their rewards program costs too much and the benefits aren't worth the price. If they don't want to stock Amazon books, fine. But people will still buy those books through Amazon and B&N won't get a piece of the profits there. The only value to be found at B&N is their bargain price books which somewhat levels the playing field.

Sorry, that was a long rant. I was a Borders shopper and have turned to Amazon to fill that void.

@SammyB Sorry to inform you but this is business. Every company has to do something to stay competitive. If amadud is trying to destroy all brick and mortar retailers and trust me they are look at what they sell on their site. I agree with Barnes and Noble's stance 100%. Amazon wants to play fair then be fair! No using backside tactics to try and get your books in the competitors space or creating apps to go look at the competitions prices then buying it on amazon and they pay you to do so. This is why companies like Target and Walmart choose not to support amazon anymore and I bet you down the line bestbuy, staples and office depot will be following behind. The more people continue to support them the more brick and mortar business continue disappear and the more people end up unemployed. That will be a sad day if Barnes and Noble the last major book store as well as mom and pop bookstore businesses disappear because of amazon and yes amazon would be the down fall of mom and pop bookstores too. As for new releases and best sellers don't know what Barnes and Noble you went to but the ones I go into here in Los Angeles always have the new releases and best sellers I am looking for. Sometimes they even have a table where new books are found either fiction or non fiction so somewhere your story doesn't make a bit of sense. Lastly the membership didn't border not only have a free membership and a paid one as well? Yes they did I bought one when they were in operations so tell me where does that BN memebership cost to much? You have no idea what you are talking about. If you buy many paperbacks and hardcovers that membership pays for itself. So in conclusion the next time you write something please get your facts straight. BN decided if amazon wants to play hard ball BN could do it just the same. May I remind you all about the whole amazon DC craziness last year. Didn't work out well for DC much did it.

I'm pretty sure my first statement was: "The book business is about making money and it should be, because that is the point in a bookstore exisiting". So thank you for trying to make it seem like I do not understand the concept of business, but I do.

I live in Henderson, NV (5 minutes outside of Las Vegas) and the selection is horrible. Starbucks takes up a bigger space in the store than the books do. And if you want to know, since you seem to be judging me quite harshly, I spend a minimum of an hour in the store when I go. If I cannot find the book on the shelves or tables, then I ask a clerk for help. I've been told, every time I asked, that they did not have any in the store and that I would have to order it online through B&N.com. When I went online I found that the prices were higher on their site than on Amazon. I shop around for the best price, because I do not have a lot of money.

Speaking of not having much money: When Borders was open I had the free rewards program when they first launched it and I did not upgrade to the paid one, because I could not afford to. With the free program they sent me 30-40% off coupons every month to use on anything in the store anyway. As an English major, I earned a lot of rewards dollars due to the high volume of books I had to purchase for school. Just because I said I never find the new releases I am looking for does not mean I do not shop at B&N. I just spent $40 on bargain books there about two days ago. That is a lot of money for me. I understand why people do not like Amazon, but as both you and I have stated: it is business. I support B&N's decision not to carry Amazon produced books, but I still believe that they are cutting themselves out of a potential profit from those sales. Does that mean it is a big enough profit to worry about? I do not know, because I do not have access to their sales numbers.

I did not come on here to fight with people about this, I simply gave my input into the topic. I stand by what I said and will not be bullied or ridiculed into withdrawing my statement.

(Far as I can remember, I have yet to want to buy a book published by Amazon; it might happen someday.)

Unless Amazon publishes killer books, I don't see this decision making much difference to B&N money-wise, while it does prohibit their competitor from advertising in their store.

The Battle of both B&N vs. Amazon is understandable as far as business is concerned. You wouldn't want to market and sell another competitors product, but... I feel that the person that's truly being hurt isn't the multi-million dollar corporation but the author him/herself. B&N came and pretty much conquered the book store scene without leaving much room for the local stores (The Wal-Mart Effect). Because they're "in charge," so to speak, shouldn't they give just a bit of leeway as far as who can be displayed in their stores? Regardless of the representing house. When you really think about it, the book doesn't come from Amazon Pub. or Random House, Etc... it comes from the blood and sweat of the authors. The authors should have the right and freedom to have there book displayed where ever possible. It's not the authors fault the business' like B&N came and wiped out "all" the competition.

Where I live, there's nothing around except B&N and I personally have been working with local authors day in and day out to help them get a spot on the shelve within B&N (because there is nowhere else to go). And 99.9% of all meetings and interviews I've had with store buying managers, they all say the same thing, "There's no money in local and indie authors." An indie author will go where ever he/she can go, with which ever publishing house will take them and give that one chance in taking the big step into their dreams. So its unfair for a "store" to judge a book by its publisher and not its author. A book is A book, is A book! And every author should have the same opportunity to have their book on any available shelf. B&N isn't playing with another companies dime, they're playing with an authors dream's. But this is just an opinion.

Oddly, Amazon sells books published by B&N (but those are mostly classics, paperback and illustrated leather-bound 'deluxe' editions.) This shows the difference between two models: Amazon basically seeks to sell everything they possibly can; B&N does not. So which one is more like Wal-Mart?