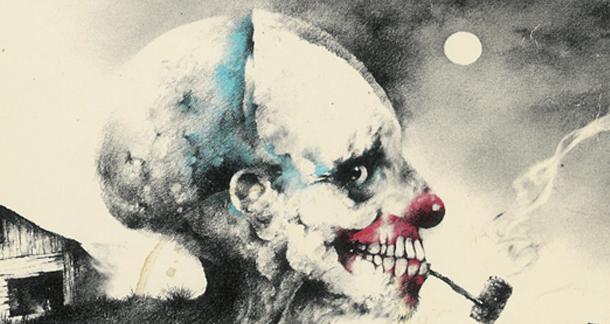 For the 30th anniversary of their children's horror anthology, publisher HarperCollins gave author Alvin Schwartz and illustrator Stephen Gammell an interesting gift: they sanitized the crap out of it.

Schwartz and Gammell's collection, Scary Stories to Tell in the Dark was first published in 1981, and is comprised mostly of traditional ghost stories passed down through folklore. The book was challenged frequently throughout the 1990s and often deemed inappropriate for school libraries or the children's section of bookstores.

The stories themselves are ones you probably remember being told at countless sleepovers and campfires. What really set this book (and the other books in the series) apart were the illustrations. Stephen Gammell's original artwork, both on the cover and inside the pages, is simply horrific. I can only guess as to what Gammell used to create these monstrosities, but the drawings all look as though they were splattered onto the page by some sort of maniac wielding a bloody brush. I remember not being able to get through all of them as a kid, purely because of the artwork (to be honest, they still kind of freak me out). Isn't this the point of a collection of scary stories? To scare people?

Fans of the series who don't already own the books might want to visit amazon, since new printings will contain boring, "updated" artwork. No offense to Brett Helquist, the new illustrator, but your work simply can't compare to this (some of the best illustrations are at the bottom of the page).

wow - thanks for sharing these - I think I would have been fascinated by these as a kid - I used to look through my mother's nurse's handbook at syphilitic feet and all kinds of biological grossness. These are yet more disturbing...

Joshua Chaplinsky from New York is reading a lot more during the quarantine February 2, 2012 - 7:32am

I never read these books, but that's because the covers scared the crap out of me. I actually had nightmares as a child involving Mr. Clowny Skullpipes up there.

PopeyeDoyle from Rio Grande Valley, TX is reading Chronology of Water February 2, 2012 - 7:48am

Yeah, these illustrations are amazing. And I think the old-school quality definitely adds to the creep factor we still feel today. Makes me want to put on my feetie-pajamas and hide under the bed... cool piece, John.

Camicia Bennett from Florida is reading Too Bright to Hear Too Loud to See February 2, 2012 - 9:20am

I LOVED these stories as a kid, I have two copies of the originals - I still get the hearse song stuck in my head!! I might have to dig this out and read it!

I loved them as a kid. The problem is that today, parents are overly sensitive about everything. Such a shame.

It's funny, I just tracked down the old versions of all 3 books 3 months ago.  I loved these SO much.  And you are right, it's all about the illustrations.

I loved these books as a kid, and yeah, the artwork terrified me more than the stories.  I'll have to find my copies.

wooo that woman spawning spiders from her cheek scared the hell out of me. NightyNight's portrait as well.

These books are what got me into horror, I pretty much have them to thank for traumatizing me as a child and making me the man I am today. For better or for worse!

They actually already cleaned the artwork up last february, if they're doing it again, I can't imagine how much more PC they can make it. I recently went into a Barnes and Noble and when I saw the updated artwork, a piece of my childhood died.

Thankfully I have my original copies I got as a kid from a bookfair in like 1995. And recently I found all three of them in perfect condition in Half-Priced books.

My kids will read them and the cycle will continue.

Also I'm glad I'm known for my avatar now. I've decided to switch back in protest of this terribleness. I missed the old girl.

@Nighty, you're doing a good job man. Keep it real.

Moderator
Utah from Fort Worth, TX is reading Lonesome Dove by Larry McMurtry February 3, 2012 - 9:10am

And my favorite was Harold.

After reading this yesterday, I went to sleep last night thinking about these drawings.  Wish I could remember what I dreamed about.