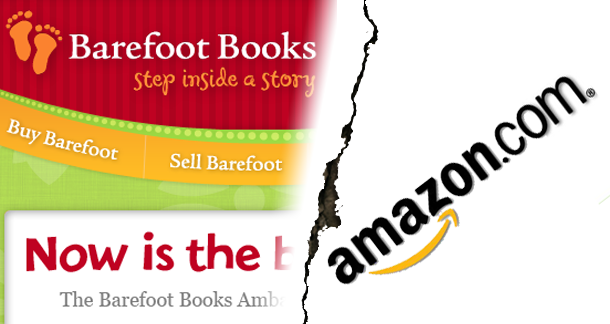 The face of publishing — and possibly more importantly, distribution, — seems to be changing on a daily basis. News this week is that an award-winning children’s publisher has decided it can’t work with Amazon anymore, citing the retail behemoth “has turned its books into commodities and undermined its way of doing business”. In a statement released on Tuesday, Nancy Traversy, co-founder of Barefoot Books said:

…the challenges we have faced doing business with Amazon over the years are similar to those we experienced selling to the big box retail chains. Personal relationships with buyers are rare, particularly when you're a small publisher. Our books become commodities that are usually heavily discounted and Amazon often starts selling them before we have even received our advance copies from the printer. This way of doing business undermines the efforts of our fantastic community of ambassadors and independent retailers.

Traversy cited her “commitment to diversity and to grassroots values; to 'small is beautiful' " and said Barefoot will focus on selling from its boutique in FAO Schwarz in New York, its studios in Oxford, England and Concord, Massachusetts as well as its own website. It also has a network of hundreds of “ambassadors” who are home-based and will continue to work with indie bookshops and book wholesalers and the educational market. And it’s not the first time.

In 2006, Barefoot stopped selling its books through the American book chains Borders and Barnes & Noble, and says that in the year it did this, its sales increased by 40%."

Barefoot Books has published over 500 multicultural children’s books since it was founded in 1993, to "help children on their journey to become happy, engaged members of the global community", and to "create a worldwide network of story-lovers who believe in the importance of imagination in children's lives".

I’ll be curious to see how they get on, particularly in light of their claims to have increased sales after abandoning big chain stores (it doesn’t say how they’ve done since then). Is leaving Amazon the answer? I know a lot of people who have ‘issues’ with Amazon and Barefoot obviously think this is the right path for them; this will be one to watch.