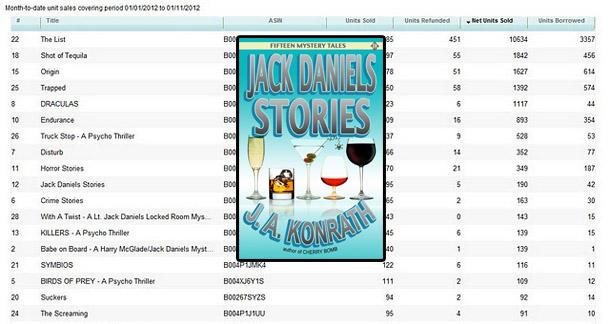 Author and self-publishing advocate JA Konrath just posted his sales numbers from Amazon for the past three weeks.

On self-published books alone, not including books that were traditionally published, audiobooks, or books sold on other platforms, he's made $100,000.

I guess this whole eBook thing is a growing industry.

Now, before you get all excited and think that self-publishing is some sort of gold mine, I think there's a couple of important caveats to talk about here:

Konrath is a professional. He takes editing and cover design seriously. He works very hard at promoting himself. He experiments with pricing. He has a ton of books for sale, and they aren't being bought in a vacuum; the kind of acclaim he has doesn't happen overnight.

Part of his acclaim is due to the fact that he was once a traditionally-published author. For guys like Konrath, I equate this to when Nine Inch Nails left their label and everyone was all like, "OMG WTF the music industry is dead!" Except Nine Inch Nails already has a following and they can do whatever the hell they want. Having a built-in base makes going independent a lot easier.

I'm not saying self-publishing is bad, and I'm not trying to take anything away from Konrath. I've read one of his book and I enjoyed it. I'm constantly impressed by his reach and honesty; who else would post sales numbers like that? So I raise my glass to him (or cup of coffee, given the time of day).

Ultimately, I think writers considering the self-publishing route need to understand that it's not easy, and you get out what you put in.

I have to give him credit for what he's accomplished, but Konrath annoys the shit out of me. I dislike that he makes it look as though anyone can achieve this success. It's misleading and damaging to writers who see this as a great way to "get rich". Most aspiring authors straddling the fence between self-publishing and traditional don't have the benefit of knowing what you and I know, which is that success like this is extremely rare. Your article is just what every one of those "uninformed" folks need to read. Thanks. I shall share.

I just wonder how much he spends on promoting and how much money a self published author realistically has to put out. I would love an article on that. I am considering this route and have gotten a generous donation so I'm wondering how much more I need to come up with. Also which self publisher to go through who won't pocket all the profits. Is it worth it to buy ad space online? That sort of info would be cool if you guys have time. Ebooks do seem the way to go these days.

EricMBacon from Vermont is reading The Autobiography of a Corpse January 12, 2012 - 8:43pm

It would be terrible if it were that easy. I would have no problem never being published, if we could weed out all of the amateur bullshit on the ebook market. Seriously, I should write teen fantasy vampire novels if I want to make money to fund my real work. This new wave of publishing is just marketing, really. You can sell fan fiction if you know who you are writing it for. Gaaawd.

The main problem that I see with Konrath's model (and the Hocking model) is that very few people can crank out work that fast.

Class Director
Rob from New York City is reading at a fast enough pace it would be cumbersome to update this January 13, 2012 - 7:57am

Brandon - That's a great point. And one of the dangers of trying is the work suffers.

There was a post on Konrath's site once talking about how you could write a book in something like three weeks and edit it in another week or two. I might be a little off on that timeframe, but it was a fairly absurd timeset.

And everyone in the comments was all like "OMG WE'RE GONNA BE RICH" and I asked if it was realistic to put out a quality book with so little work and effort.

No one answered me.

I love this guy!