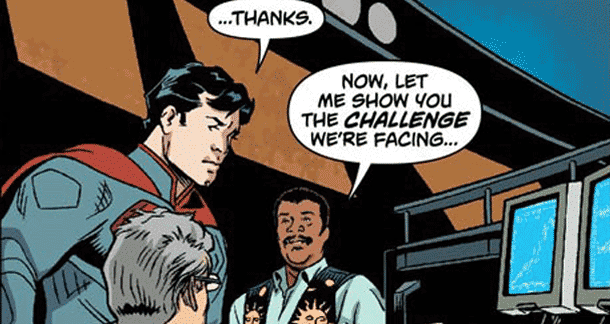 Tyson, an American astrophysicist and Director of the Hayden Planetarium at the Rose Center for Earth and Space in New York, actually located several candidates in the real universe before settling on a system that’s 27.1 light years from Earth.

As a native of Metropolis, I was delighted to help Superman, who has done so much for my city over all these years. And it's clear that if he weren't a superhero he would have made quite an astrophysicist.

According to the comic, Superman visits Tyson every 382 days to try for a glimpse of Krypton. Issue #14 is out today and you can find the coordinates Tyson provided to DC Comics on the Guardian website.

Being able to ground superhero science in the real world is a great storytelling device and can make the fantastic elements of comic books seem more real.

It sounds good to us - what do you think? Does tying fiction into reality help give a story more realism?

Tyson: smart, highly-educated, handsome and charming...a superman. Love this idea as much as I loved Stephen Colbert in the Spider-Man series, only this seems sneakily-educational...

Joshua Chaplinsky from New York is reading a lot more during the quarantine November 7, 2012 - 10:10am

Tyson is the man.

It would be better the other way around. Look at Wayne barlowe and HR Geiger's art for an example of practically functioning fantastic creatures and worlds. If Tyson got together with a writer to create a hard sci-fi book or comic I'd definitely be intrigued. Closest.

Dwayne from Cincinnati, Ohio (suburbs) is reading books that rotate to often to keep this updated November 8, 2012 - 8:23am

I'd be to worried that the person I brought in would do something ultra horrible and taint the work. Not that I think that Tyson did, I don't know anything about the guy.