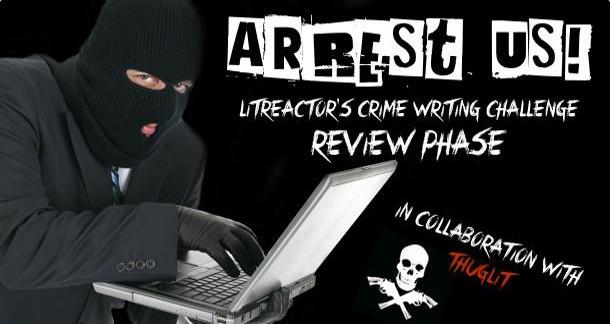 We've been busy little bees here at LitReactor, and no, that's not completely figurative. Rob's dressed in a bee suit and is demanding we lather him in honey while he rants about "the greatest prize of them all." But besides that, we've been hard at work since the epic conclusion of Arrest Us! You guys gave us a lot to do.

On the one hand, we here at the site want to thank you, deeply and sincerely. We had a huge, magnificent turnout for this contest, and we're seeing a lot of new faces floating around the boards. You guys put your best foot forward, you were kind and constructive, and you kicked all of the ass. Well done.

On the other hand, curse you, because the high quality of your work made it very difficult to parse out the winners. The choices we had to make were not easy, and at least one of us lost a finger (you can tell which one; he can no longer reach the "p" on his keyboard, and just skips them altogether now). There actually was quite a bit of back and forth as we debated how to divvy out the prizes, so you can be sure this was a close race in every way.

But at last, we've made our decision. So let's announce our winners, shall we?

This was a short story contest, but part of what makes LitReactor such a special place for writers is the awesome feedback they can receive on their work here. We were bombarded with a huge number of stories, which came from experienced writers and newbies alike. As most of you know well, reviewing a story and leaving quality feedback is a consuming process, and these guys put in a huge amount of work that helped make this entire contest worthwhile.

You may have noticed that when we initially announced our publisher prize packs, we said there would be four packs total: one from Mulholland Books, one from Hard Case Crime, one from Broken River Books, and one from MysteriousPress.com. However, when we were crunching the numbers, we found five members total that we felt deserved star recognition. So, Grant Williams will be receiving a LitReactor prize pack! What's inside? You can ask Grant when he gets it...

I also wanted to point out that two of our winners, Adam Jenkins and Seb, performed the pants-exploding feat of having read EVERY SINGLE STORY. Seriously, guys, that's 149 stories total, and these guys read and reviewed every single one. Give them a hand, or two, or however many you happen to have left over from that thing last year. They deserve it.

"Burglaress" by Irene Inatty will be critiqued by Chris F. Holm!

"Buried Treasure" by EdVaughn will be critiqued by James Grady!

"Grey Matter" by Hooper Triplett will be critiqued by Bryon Quertermous!

"The Heist" by Amy Taylor will be critiqued by Hilary Davidson!

"The Sin Bin" by bryce.e.allen will be critiqued by Charles Ardai!

It's all well and good to have a contest and grand prizes and such, but we wanted to make things interesting, and with so many participants, we thought it might be fun to reward some stories that were chosen randomly off the top of the pack. Anyone who had a story in the top 50% was fair game here, and our lucky winners will receive a critique of their story from one of our five guest reviewers.

Unlike years past, our guest reviewers will only be looking at one story each, so it's certainly going to earn our winners some bragging rights as well as a real edge when revision time comes along. Congratulations to the winners, and thank you to our celebrity reviewers! Because of their busy schedules, we're giving them to the end of the month to turn in their reviews—though we'll extend that deadline if needed, and we'll let the individual writers here know if we need to do that.

And the Grand Prize winners...

... will be revealed in part 2. We've sent Todd the best of the best, and he's reading through them carefully to decide who wins the spots in Thuglit. You all worked hard, and I'm sure he's getting plenty beaten up by what we sent over, so I'm as excited as you to see how it all pans out.

Until then, practice your breathing exercises, keep your fingers crossed, and good luck to everyone!

Well done all. I'm especially pleased Burglaress got picked, as that was one of my favourites in the contest. Enjoy the critiques.

Congrats to all the top reviewers, well deserved. I had the pleasure of getting crits from three of you (what the fuck, Cmangano?) and good input was given all around. Best of luck to those in competition for the ThugLit spots.

Christina Re from the United States is reading something a friend wrote August 12, 2014 - 6:14pm

Congrats everyone! This was a fun competition and I enjoyed reading the stories and reviews. There was some excellent writing and feedback throughout.

Neil, look again. You even responded to my post.

I enjoyed this contest tremendously and am looking forward to participating in future ones.

Congrats to the top reviewers, and the lucky critique winners!

Neil Krolicki from Denver is reading Consider This, Heartbreaker & Want Me September 4, 2014 - 11:08am

Apologies Cmangano! You're absolutely right.  When I wrote that comment I was still trying to find the right balance of balt salts and paint thinner for my huffing addiction - clearly I haven't found it yet - the battle continues! Cheers man! -NK

Congratulations to the winners, Adam and Seb great job! Enjoy your spoils of war!