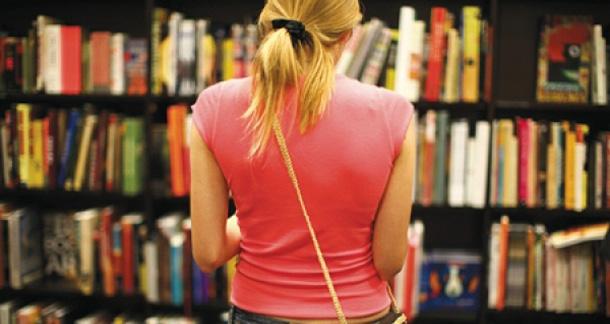 Farhad Manjoo is at it again, trying to walk back his controversial anti-bookstore tirade with another article in Slate that... still doesn't make any sense to me.

In case you missed it, Manjoo wrote an article last week that caused a tizzy in the book industry. It bashed independent bookstores for being expensive and offering too small a selection, while praising Amazon and its steep discounts. Manjoo may have raised some good points, but many people (including me) took exception to some of his facts and a lot of his tone: That bookstores were gouging readers, fostering an elitist attitude, and were ultimately enemies of literature.

Now Manjoo believes that indie bookstores can fight back against Amazon by adopting technology like that offered by AisleBuyer. If bookstores had apps that helped you find recommendations and buy books, they'd be competitive.

And it's at this point that I realize Manjoo is probably the kind of guy who e-mails his colleagues to ask them questions even if they're sitting four feet away.

His first article was predicated on price: Amazon is so cheap that indie bookstores can't compete. And yes, the economics are stacked against bookstores. Amazon gets bigger discounts for buying in bulk, doesn't have to maintain storefronts, and can afford to sell certain items at a loss. Indie bookstores don't have those luxuries.

Now Manjoo thinks it's all about technology. Except, not really. Again: My office is in an indie bookstore, but I'm also an Amazon shopper. I can say with some confidence that I doubt the bookstore would be more competitive if we had an app telling people which books to buy. Because they come in and ask! That's specifically why they come to an indie store! To get recommendations from people who know and love books!

Regardless of all of this, I'm sure Amazon isn't worried. They just announced that they're opening four new distribution centers, two in Virginia and two in Tennessee. They'll create close to 3,000 jobs (and in this economy, that's a good thing). They're getting stronger and stronger.

And maybe one day soon all the bookstores will be forced to close and Manjoo will get his wish, and we will get all our book recommendations from computers. What a brave new world that'll be.

I've got a ton of book recommendations from litreactor message board trolls posters. I've gotten lots of gems and not one bad one yet (knock on wood). Mind you, I don't think I've ever used an app, so I'm less apt to use one.

I want to point out this particular section of your article:

Now even though that makes sense to you, what you have to keep in mind that we're part of the last generation that can still talk to girls without the use of Twitter, Facebook, or any sort of electronic device.  Seriously, why spit game in person when you can just stalk her online?  What I'm saying is, for some people, using technology is easier than exercising the niceties (or terrors) of simple human interaction.  We're a dying breed of people that still enjoy the pleasure of conversation.

Manjoo, God bless his little heart, probably is of a mind that if he can do it online then there's really no need to speak with a human being.  It's sad, bad for the small bookstore, and will probably lead to an even lower level of social deficiency than we're already enduring.  Do you really think he'd get behind the podium at a place like the AWP conference and say this shit? Hell no!  Because he knows he's the 'unpopular opinion' as it were.  I guess that's the benefit of being able to hide behind the computer.

Joshua Chaplinsky from New York is reading a lot more during the quarantine December 22, 2011 - 2:50pm

I know you disagree with him, but he keeps winning me over more with each article. The argument that most often comes up about buying from a local store is that it's some sort of event. He addresses this point and I think he nails it.

Many defenders of bookstores countered that by focusing on dollars and cents, I’d missed the whole point of these establishments. Bookstores, it turns out, don’t primarily exist to sell books—instead, they’re more like bars for readers. “Bookstores provide a space to meet friends, cruise for a date, and hide out when you have nothing to do on a Saturday night,” Will Doig wrote at Salon. I suspect that many bookstore lovers agree with Doig, which is exactly why many of these shops are going out of business. Bars can survive because alcohol is an extremely profitable good. Books aren’t—so if you think of your favorite bookstore as a comfortable spot to find well-read potential mates rather than as a place for commerce, you’re not helping its owner.

Perhaps that is the solution? Bookstore-Bars. I'd actually consider going to that.

amongthegoblins from North Carolina is reading Among Others, The Three Musketeers, Bindoff's Tudor England, and Les Sortceliers December 22, 2011 - 3:58pm

One thing that people keep saying about indie bookstores is that they're special because they're staffed by people who know and love books. And that's great, but I used to work at Borders, and I can tell you frankly that everyone who worked there was a major bookworm, too. I was asked about my reading habits during the interview, and I think it was a major part of why I got hired. So, yes, indie staffers are great readers and love books-- but the same goes for big-box staffers. (And I would have loved to work at an indie store, but they're mostly so small that they're never hiring. Big-box stores have more jobs available.)

amongthegoblins from North Carolina is reading Among Others, The Three Musketeers, Bindoff's Tudor England, and Les Sortceliers December 22, 2011 - 4:02pm

Joshua Chaplinsky from New York is reading a lot more during the quarantine December 22, 2011 - 5:51pm

I used to work at Borders, and I can tell you frankly that everyone who worked there was a major bookworm

So true. I worked at both B. Dalton and Borders and a lot of us were book nerds. Not all of us, but a lot of us.

BludgeonBob from America - Coast to Coast is reading Jonathan Strange and Mr. Norrell December 23, 2011 - 8:38am

I've always enjoyed the "Staff Picks" at my favorite Indie stores which is a lot like the suggestions you get from Amazon.  Some stores even model their shelves off of the Amazon concept and will have a shelf with "If you liked this ... then you may also like these ..."  If I didn't like anything on the displays I could always grab the nearest rep and ask "how far away from Twilight can you get me?" on Amazon Twilight might come up because I ordered The Strain and both have vampires so it must be similar.  But I digress, "Mangoo" isn't wrong.  Stores are going by the wayside and odds are it will only get worse for our dear small businesses.  I, personally, like to get out of the house every few weeks or so for some much needed sunbeams and find a trip to a bookstore refreshing/calming.  Odds are there is going to be some very chill music, no screaming kids, I can scan shelves for old and new friends, and often times even talk books with some of the other patrons (lets see Mangoo get book recommendations from strangers he's recently befriended on Amazon).

Sadly, Brandon hit the nail on the head:  "What I'm saying is, for some people, using technology is easier than exercising the niceties (or terrors) of simple human interaction.  We're a dying breed of people that still enjoy the pleasure of conversation."   Why Brandon?  Why do we, as a nation, not speak to one another more often?  We're more concerned with updating statuses, tweeting, blogging, or (and the hipocrasy does not escape me) commenting to posts someone else made to turn to the person next to us on the bus and say "hey, tell me a story."  But why do we hide behind these electronic communications?

Speaking of which, when is the first LitReactor mixer?

Mick Cory from Kentucky is reading everything you have ever posted online and is frankly shocked you have survived this long December 30, 2011 - 8:21am

I am somewhat amazed that so many cite civilian, employee or software generated recommendations as a catalyst for purchases. I know I am not alone in my complete disregard for these, considering the fiercely subjective nature of reading (and reality for that matter). I will never understand why anyone listens to the musings of critics (often themselves failed or mediocre writers, film-makers, chefs et cetera) instead of just exploring the medium of choice for themselves.

I am reminded of the continuing decline of record stores. While I do not foresee the book sharing a similar fate, I do equate the argument championing the preservation of independent book-sellers with the mewings over the death of music outlets. The world is changing, and quite rapidly. While Mr. Tietz is correct that successive generations are engaging their environment in a manner vastly different than our own, this is hardly cause for concern or consternation. Certainly not some misplaced sense of superiority. This brave new world is however dependent on finite resources, so take some small measure of comfort that we could quite easily be punched back down to pre-tech lifestyles.

Summer jobs should not become careers, friends. This all smacks of outrage from another set of hipsters being relegated to the street with the rest of us.

I was also just discussing the bar/library/bookstore hybrid business model and feel it would be too difficult to protect the stock from the inevitable damage that would occur. This fact saddens me greatly as it seems like such a potentially successful marriage otherwise.