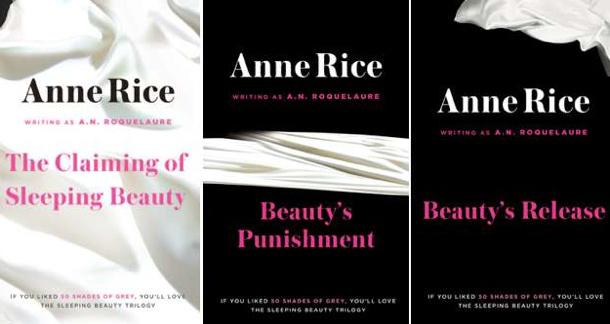 E.L. James is raking in a reported million dollars a week with the Shades of Grey trilogy, probably swimming in a penis-shaped pool of money and making it rain on strippers as we speak. As writers and publishers scramble to replicate the success of her erotica for housewives, one writer is ready to ride the trend to the bank without even lifting a pen to write new material.

Fortunately for Rice, one decade's outrageousness is another decade's cash cow. Sales for her Sleeping Beauty series for the first six months of this year are already double what they were for all of 2011, but Rice and publisher Plume think they could be even better, so they are re-releasing the series tomorrow with new covers that proclaim, "If You Loved 50 Shades Of Grey, You'll Love The Sleeping Beauty Trilogy."

What do you think of the new covers?

What does strike me as weird, is the price of kindle edition. I know what ebooks are for some reason more expensive, but $17 computer file compared to $10 paperback?

Now I am never going to use that thing. Oh well.

Did you coin the word rapey? I approve.

Was wondering when they would smarten up and re-release these.

The new covers are terrible though. There's no character to them at all.

It's funny that this could be re-released to kind of dovetail both with the popularity of erotica via 50 Shades and a renewed interest in modernized fairy tales. Circle of life I suppose!

Jane Wiseman from living outside of Albuquerque/in Minneapolis is reading Consider Phlebas, by Iain Banks July 10, 2012 - 10:55am

I remember reading these ages ago, too, and they were a whole lot better written than "50 Shades," although it wouldn't take much. Good god, just go read "The Story of O" and be done with it.

Jane Wiseman from living outside of Albuquerque/in Minneapolis is reading Consider Phlebas, by Iain Banks July 10, 2012 - 10:56am