And The Second Hobbit Film Shall Be Called... 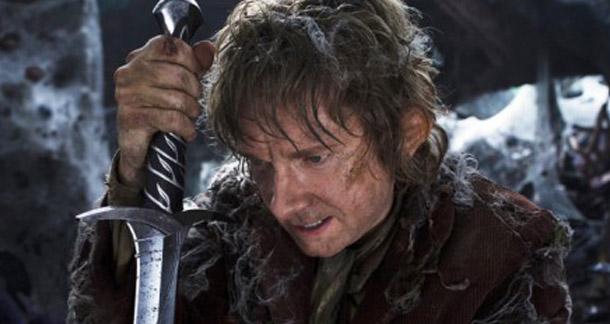 The Hobbit: The Desolation of Smaug.

There it is. The title of Peter Jackson's second Hobbit film. There's been some speculation about the titling of the films ever since Jackson announced he'd be stretching the adaptation of JRR Tolkien's The Hobbit from two to three movies.

Warner Bros. and MGM have also announced the release dates, so here's everything, in a neat and tidy list:

I haven't read this book in a very long time. Has anyone read it recently, and want to speculate on the pacing of the story based on the title of the second film?

Also, a lot of people seem very nervous about Jackson making three films. Is it because the source material doesn't support that much movie, or is it Jackson's post-Rings record, which has been less than stellar? What are your concerns? Is anyone else cautiously optimistic (my stance, thus far)?

I doubt it will be horrible.

I always thought the end of the Hobbit was rushed.  After Smaug is killed, dwarves and men and elves and everyone descend on the Lonely Mountain to fight for the treasure. It wasn't an enormous part of the book, but accurately depicting the nations and the politics for that war (and the death of Thorin), as well as how it introduces Bilbo to a global forces, could be a movie in itself if done correctly.  Technically, from a story standpoint, the journeys in the Hobbit and the Lord of the Rings are each 1 year long.  And if Jackson added the Lord of the Rings appendix info, which he says he did, there is plenty of content for three movies.  The question is simply: did they film enough to make three movies?  I'm guessing they did.  The second movie was probably getting into 4 hour territory like Return of the King, so they could easily split it into 2 two-hour-movies.  I'm hopeful.

I think The Two Towers and Return of the King are far superior to The Fellowship of the Ring (if we're talking about movies, that is), but that's just my opinion.

And the consensus of Rotten Tomatoes.

I like the extended version of The Two Towers even better.

I'm cautiously optimistic. Jackson's post-trilogy track record is, well, not good. It's like he's been trying to replicate the epic scope of Lord of the Rings. And failing. If actually replicating that scope is what it takes for him to make another good film, so be it. But that the director of movies like Dead Alive and The Frighteners, which are so much fun, has dedicated the past decade to making such aesthetically beautiful but artistically ugly borefests as King Kong and The Lovely Bones just bums me out.

I was never blown away by the novel The Hobbit like I was by, say, Fellowship, so I'm interested to see how my expectations play into my reception of this new trilogy.

I just finished reading The Hobbit over the summer as a serial bedtime story to my son, so we'd be ready for December. My son is 6, and he was okay with the story, even the "scary" bits with the dragon and the goblins and orcs. I first read The Hobbit when I was 9, and it led me to pretty well every decent piece of literature I've read in my life since, so it has a special place in my life.

I grew up with the Rankin/Bass version of the movie, which stayed quite true to the book, I suppose. But I always felt as if something were missing.

We all know that PJ is going to stray from the book as much as he did for the LOTR trilogy (mind you, if I were Arwen, I'd've given up my immortality for Aragorn if he looked like Viggo, too), so I think it will be interesting to see what he does for Smaug - probably more of the dragon's back story, and possibly an invented back story since he has not (as yet) acquired the rights to The Silmarillion.

I am looking forward to seeing PJ's adaptation. I think PJ got caught up in the whole "all films must involve WETA" thing, and so he sacrificed story for special effects (see: King Kong). But I did love The Lovely Bones as a film. And PJ holds Tolkein dear, and he knows who he has to answer to if he f's it up (I was at the LOTR Oscar Party in 2003 when he declared he'd made the films for "all of us"). This is his forte, and I think the films will be fantastic! (pardon the pun)

sean of the dead from Madisonville, KY is reading Peckerwood, by Jed Ayres September 4, 2012 - 6:55pm

I was really hoping this would say "And the second Hobbit film shall be called...The Hobbit 2: Electric Boogaloo.

edsikov from New York by way of Natrona Hts PA is reading absolutely nothing September 11, 2012 - 6:50am

Come on. When a director sets his own bar as high as Jackson did with the three LORD OF THE RINGS films, it's unfair to assess his subsequent two features as "less than stellar," though they may in fact be so. Of course they look inferior next to three epic masterpieces. It's like demanding, "Herman, you slouch! Write something that tops MOBY DICK!"

Nobody ever said to Van Gogh, "Hey, paint 'A STARRY NIGHT' again, man!" He painted it once, that was it.

These shows offer the musicians an experience to perform well in front announcing the blown away tour of public and so the attendee will perhaps see the musicians to execute again and again if the concert was worthwhile and the demand of that instrumentalist will increase quickly.

Ed, 'The Lovely Bones' and 'King Kong' are pretty much inferior to the rest of Jackson's filmography, not just the trilogy.

Also, no one told Van Gogh much of anything about his art during his lifetime, and I'm pretty sure that 'Moby Dick' got most of its recognition posthumously.