An Immersive Thriller that Follows You "Into the Real World” 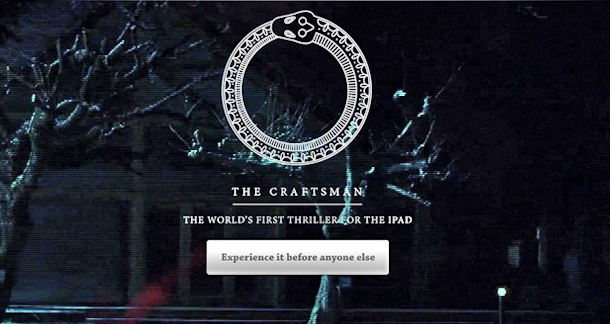 eBooks up to now have comprised flat, simple, electronic pages, much like real books, and despite attempts to add music, hyperlinks and multimedia widgets, they haven’t changed much. Now, a new immersive thriller launched on the iPad this week aims to change all that. Called The Craftsman, it’s a combination of “literary gothic and cinematic chiller” — something its developer Julian McCrea is convinced is the future of fiction.

With sales of paper books declining, McCrea believes the app represents a new kind of digital storytelling that could open up an Alice in Wonderland rabbit hole of possibilities. "No two people will get the same experience," says McCrea, who gave up his job on Dr Who – launching the programme's global Facebook page – three years ago to start Portal Entertainment.

You are the main character, mixing influences like Hitchcock and Poe, not to mention Christopher Nolan’s film, Memento. It reminds me of the books back in the 80s where you made decisions to determine how the story went, but this one’s more complicated, as it starts to take over your real life.

"You”, as a fully paid-up character in the drama, can sign online petitions on fictitious websites and receive cryptic messages on your mobile phone from other characters, while the events you attend in the story pop up in your real-life calendar, as the app's creators attempt to "bleed" the story into your everyday life.

The story unrolls over five days which McCrea hopes will hook those “thirtysomething dads used to whipping out their phone to play Angry Birds” no to mention tapping into the “the £87m British market for thrillers and crime novels.” What do you think? The novelist and leader of the writer’s team for The Craftsman, said "Publishers are terrified [but] there has never been a better time to be storyteller."

Sounds really cool. I think done right this could be fun. Imagine a text that says something about it raining outside, based on national weather reports, or cold temperatures. If you check in on your smart phone, do you get an email asking if the "cheeseburgers were good"? Has a lot of potential, I think.

I went to the site, it says "available in September" and has a link to "experience it before everyone else."  Like a beta, and the site hasn't been updated.

So clicking on the link bring up your email, in which, I suppose, you convince them to allow you to participate?

"Thanks for your interest - the Craftsman, 'World's first thriller for the iPad' will be out actually at the end of October on the UK app store (then other markets in the following months - where are you based?) - I will notify you when this is available.

Look forward to your feedback on the Craftsman!"

Disappointing. But I'll be watching for the release.

I'm not sure what's "new" about this sort of thing. I played games like this over a decade ago. See Majestic: http://en.wikipedia.org/wiki/Majestic_(video_game)