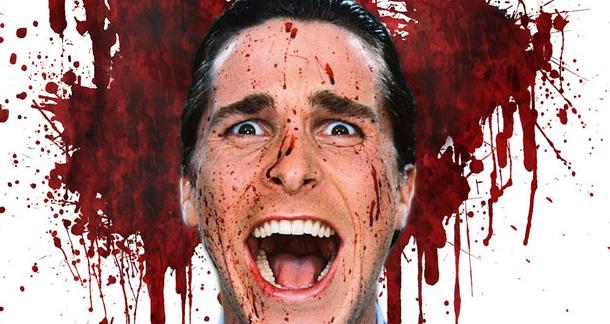 Let's get one thing straight right off the bat: I love American Psycho.

The novel was one of the principle reasons I got a hard-on for the written word.  At the young age of twenty, I was reading this book and thinking, "Holy shit, now this is how you do it."  It was the proverbial highlight reel of how to write a character-driven story, and I still make a point of going back to it at least once a year to enjoy the ride all over again.

Then there's the issue of the Mary Harron adaptation--an utter failure at the box office, but hey, most of my favorite movies didn't do well with mainstream America.  We loved it, my friends and I.  We'd quote the hell out of it, never missing a chance to say we've got an 8:30 res at Dorsia or  we need to return some videotapes.  On double or triple-dates we'd say: "I don't want you to get drunk, but that's a very fine chardonnay you're not drinking."

That's how you know you've got something special on your hands.  Not only are you quoting it, talking about your favorite scenes ("Do you like Huey Lewis and the News?"), but you keep going back to it.  American Psycho is one of those rare cases where both the novel and the film work perfectly, yet, do so in their own way.  The novel was hyper-violent, disturbing, and satirical.  The film toned down the violence, and almost plays out like a very dark comedy.  I love them both for very different reasons.

So imagine my surprise when I found out yesterday that Lion's Gate has ordered an American Psycho remake.  That's right, they want to remake a film that only came out ten years ago, tapping Noble Jones (the second unit director on The Social Network) to write and direct.  Noble says the film explores how Bateman would fare in modern-day Gotham.

Now sometimes we, the LitReactor staff, get some backlash over our point of view on things.  Having said that, I'm not going to slam Lion's Gate, but I am going to remind them of what a good job they did with the original film and point out the very obvious warning signs.

-If you're so inclined, pay a visit to Bret's Facebook page and read the comments being made.  Do you see this?  This is the core audience--your target demographic, saying they don't want it.

-Then there's Christian Bale, who is synonymous with two main roles: Batman and Patrick Bateman.  In a character-driver film like this, do you realistically think you can top him?  Because this is the position you're putting yourself in: creating a better Patrick Bateman.  I'm not saying it can't be done, but your chances are slim.  These are the same small stakes you'd be looking at if you tried to remake Fight Club with two guys that aren't Brad Pitt and Edward Norton.

-You've tried to cash in off the popularity of the original before.  Remember American Psycho 2?  Bad sequels are one thing, but to take something that's already good and putting a new spin on it--I dare say that's even worse.  Remember how worked up people got when the rumor was going around that Justin Bieber was going to be Marty McFly in the Back to the Future remake? That's the kind of public backlash you're going to be dealing with.

Again, you people at Lion's Gate got it right the first time.  I'm sorry it didn't make more money.  I'm sorry I didn't see it in theaters.  I saw Rules of Attraction twice thinking that would be my small way of making up for it.  Obviously, you still think there's money to be made with this idea, and I'm sure you will.  I'd like to be positive about this, but it just makes me sad to see a company trying to fix something that ain't broke.

Let's end it on a bright note:

Litreactors, feel free to post your thoughts, favorite clips, anything at all.

Class Director
Rob from New York City is reading at a fast enough pace it would be cumbersome to update this December 9, 2011 - 10:45am

While they're at it they should redo Spider-man with a whole new cast, too.

wtf? how can you un-80-ify that story? (haven't seen the film). It is a statement about the shallow sociopathy of the 80s - wtf?

I think Noble Jones simply wants to make a story about an American psycho, and latch on to all that wonderful Bateman branding.  Another example of a movie studio being too pussy to get behind original material, and instead cowering behind a pointless remake.

@postpomo, you are absolutely correct.  There is no taking the story out of the 80s.

To this day, I have never had business cards printed without angsting over bone/eggshell/nimbus and raised lettering. And my current printing WILL make you break out in a sweat.

Mick Cory from Kentucky is reading everything you have ever posted online and is frankly shocked you have survived this long December 9, 2011 - 10:57am

I have a very negative opinion on the current remake craze. I have made comments concerning this trend already on this site. I do however feel the original film in this case failed. I have always attributed this to Harron's rather reserved handling of the material.

Joshua Chaplinsky from New York is reading a lot more during the quarantine December 9, 2011 - 11:22am

I don't love Harron's film, but there's no way anyone's gonna top Bale as Bateman. Unless they cast Fassbinder...

Also, if Fincher let this guy direct second unit, he ain't gonna be a putz.

Chester Pane from Portland, Oregon is reading The Brief and Wondrous Life of Oscar Wao by Junot Diaz December 9, 2011 - 11:31am

If nothing else it will cause a resurgence of interest in the book.

You know what was awesome? American Psycho 2.

Joshua Chaplinsky from New York is reading a lot more during the quarantine December 9, 2011 - 11:45am

They should make a musical version set in high school. Ryan Murphy could direct.

"But I also think Jeff Tweedy works best within the confines of the group, than as a solo artist, and I stress the word artist."

It sucks that people will see this re-make and STILL say "Wait, theres a book?"

I saw something on Bret's Twitter feed about this this morning and thought it was a joke.

Anyway. I can't imagine American Psycho being done outside of the 80s. It just doesn't make sense to me. They kind of did this with The Rules of Attraction and fair enough, the end result actually wasn't half bad, but I kept going back to how it would have turned out had they kept the original setting from the book. That said, it did work. But ... I'm not sure I see the same as being true for American Psycho.

Same with casting anyone other than Christian Bale as Patrick Bateman. I still can't watch a single movie he's in without thinking of him as Bateman. Unless they were to cast Scott Disick ... haha.

@jacks_username: I know exactly what you mean. I've only ever mentioned American Psycho to one person who had read the book as well. The same was true for Fight Club. The moment I mentioned it; 'ooh, I love that movie!'

Joshua Chaplinsky from New York is reading a lot more during the quarantine December 9, 2011 - 1:25pm

I personally think Rules of Attraction is still the best Ellis adaptation out there. But yes, Psycho is completely married to the time period, even if Wall Street is just as greedy now as it was then.

I agree with Josh.

That said, if we want to be talking about a disgusting remake, it should be this.

Josh - I'll agree with you, Rules was the best adaptation.

Oh man, Rules was fucking great.  The three-prospective first scene alone made it worth the price of a ticket.

Joshua Chaplinsky from New York is reading a lot more during the quarantine December 9, 2011 - 1:42pm

Just horrible. The Stooges are rolling in their graves.

My favorite scene is Rules of Attraction was this one. So well done.

Hetch Litman from Somewhere in the mountains of the Pacific Northwest is reading The Violent Bear it Away by Flannery O'Connor December 9, 2011 - 3:39pm

The original movie was  terrible. I am actually astounded anyone liked that tripe.

Greedy bastards want to cash in on the cult success of the previous one.

I'd love to support this remake, but I've got to return some video tapes...

According to what info I can find, the original made around $35 million worldwide on a budget of only $7 million.  I don't know if I would classify that as an "utter failure" or not.  That's not Avatar money, obviously, but I don't think anyone really expected it to be a huge mainstream hit or marketed it as such..

David "First Blood" Morrell has said that a film generally has to gross three to four times its budget in order to turn a profit, so there's a good chance that the original made money for someone, although of course Hollywood accounting is famous for making successful movies look like duds in order to prevent the payment of royalties.

Was that Snooki in the Three Stooges remake?  Wow, just wow.  Does Justin Beiber make a cameo too as the ass bandit?

Joshua Chaplinsky from New York is reading a lot more during the quarantine December 11, 2011 - 8:32am

Ellis on the remake- Only if they cast that dude who is married to the other Kardashian chick.

I gotta admit, he looks the part, but he has no acting experience.

Joshua Chaplinsky from New York is reading a lot more during the quarantine December 11, 2011 - 8:39am

Crazy, but there are a ton of copies of that clip on youtube, and none of them contain the actual song. It took me a minute to realize why the scene felt so off.