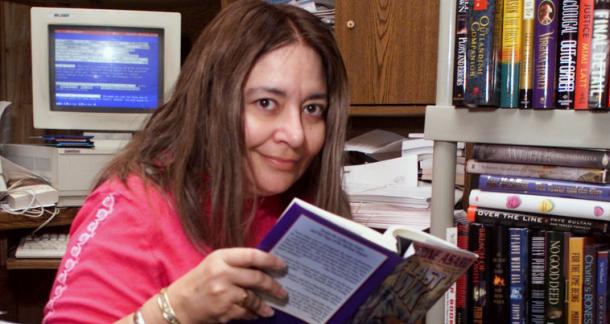 And exactly zero of them are negative.

Klausner's passing has brought the spotlight back around to her work, the staggering numbers, and the fact that she managed to read 31,014 without coming across a single one that she rated lower than 4 stars.

Klausner claimed she was a speed reader, and as a fan of thrillers and romance, had no trouble plowing through a book in no time.

You ever read a Harlequin romance? You can finish it in one hour.

Which you'd have to if you wanted to put up that many reviews in about 20 years. According to my calculations, that's about 4.3 reviews per day.

In 2006, Klausner was profiled in Time's People of the Year issue. Which, if you remember, was that cop-out year where you were the winner. As in all of you. I had a decent 2006, but come on, Time. The profile was brief, although Klausner did say that one of her life goals was to read every vampire novel ever published. Perhaps an unfortunate goal to make as the Twilight wave was peaking.

Klausner is currently Amazon's #1 Hall of Fame Reviewer, and her last review went up October 12th, 2015.

There were, of course, questions about Klausner's level of positivity, whether she'd been paid off to give books a little boost here and there. But she always denied being paid to review on Amazon, and her only form of payment was receiving advanced copies of books.

From the perspective of publishers, there was a definite good side to the work Klausner did.

There are authors she covers that don’t get covered by a lot of major review outlets because of space limitations. Harriet’s their champion.