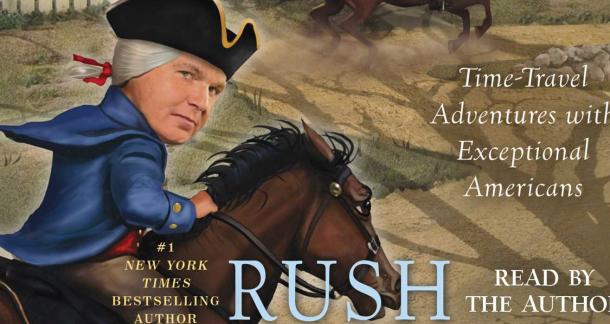 Amazon has released it's 2014 list of bestselling books, and the temptation to dig into its meaning is fresh.

Sue Monk Kidd's The Invention Of Wing's is the bestselling title of 2014. Which shouldn't come as a huge surprise. It was poised to be big, it was released in early January, giving it a good window for the year, and it was named a book club selection for Oprah's Book Club 2.0 before it was even released. "2.0" is Oprah's term for her book club, by the way. She's ignored my emails about changing the name to "Book Club Two-Point-Ope."

It was a pretty good year to be a conservative pundit. Bill O'Reilly's Killing Patton made the top-sellers, and TWO Rush Limbaugh books made the top 10 in the children's category. Rush Revere and the American Revolution and Rush Revere and the First Patriots both feature time-travel, a talking horse, Rush Limbaugh, and some kid companions. It's easy to see why the series has caught fire with witty one-liners like "“I mean you might be a mugger or a zombie or even worse, a vacuum cleaner salesman!”

Other points of interest, the new Diary Of A Wimpy Kid book is the only book in the top 20 overall sellers to sell more print copies than Kindle copies, and two Kindle-only books made the top 20 in the children's category.

The Martian by Andy Weir was the top-selling book by a debut author, and it's awesomeness made LitReactor's Staff Picks more than once.

And if anyone has read Rush Revere, please comment and let me know. I have 1,000 questions.

The horse on the cover makes sense, but why the horse's ass too?

at least he teaches the real story of thanksgiving.