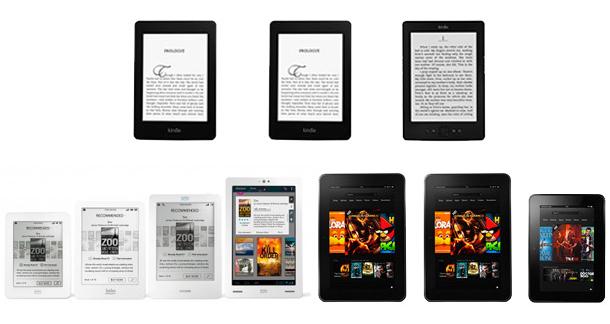 Amazon made a huge splash yesterday with its updated line of eReaders and tablets. Let's begin...

Next up are the eReaders--Amazon unveiled the Kindle Paperwhite, their answer to the backlit Nook that came out a few months ago. They've added more pixels and increased the contrast. Word from the floor is the backlighting looks pretty and smooth, though with a bit more lag than older models.

Gizmodo has a pretty good roundup of what was announced, and you can see that here.

Click over to Wired to find out the specs and details on the Kobo equipment.

So... that's a lot. What do you think? I'm not going to lie, I like the look of the Kindle Paperwhite. I have the basic Kindle, and I like it, but I think the backlight might be enough to upgrade. And $69 for a base model Kindle?! They're getting closer and closer to impulse buy territory...

Dwayne from Cincinnati, Ohio (suburbs) is reading books that rotate to often to keep this updated September 7, 2012 - 3:46pm

How bad is it the impluse for me is stopped only by trying to pick out which one I want?

I returned two malfunctioning kindles within a year... maybe this version is more sturdy?

Dwayne from Cincinnati, Ohio (suburbs) is reading books that rotate to often to keep this updated September 7, 2012 - 5:36pm

@pkanom - Oddly, mine Kindle 3G is holding up better then some paperbacks I've owned. I'll totally admit that is most likely dumb luck. What type did/do you have?

It was a 3G one, before the "touch" generation came along. The first one froze within 4 months while I was reading it. Amazon replaced it but I had to send them the defective by UPS, so it really meant the same as buying a new one. The second one I think I pretty much broke it  (knelt on top of it as it was under the covers in my bed)

I'm planning on getting a new one, but they're updating so fast as of late...