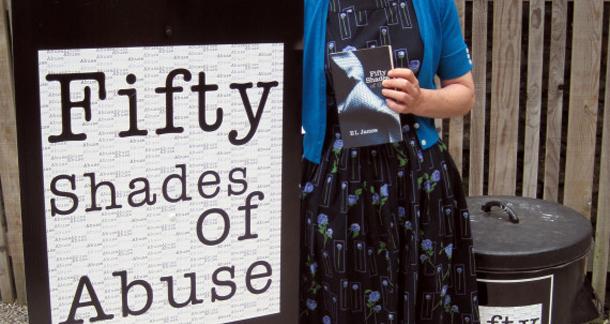 A charity in England has decided to use its collection of the bestselling book, Fifty Shades of Grey by E. L. James, as toilet paper and composting material.

The charity called for donations of the book after it was revealed that libraries were ordering extra copies to meet the demand. Spokesperson Clare Phillipson said:

I do not think I can put into words how vile I think this book is and how dangerous I think the idea is that you get a sophisticated but naive, young women and a much richer, abusive older man who beats her up and does some dreadful things to her sexually.

Originally intending to burn the collected copies on a bonfire on the 5th of November (traditionally Bonfire Night to remember Guy Fawkes attempt to blow up the Houses of Parliament), the charity decided to put the books to a better use in protest of the book’s themes.

My main objection is that at a time when local authorities are making cuts to outreach and refuge services for women experiencing domestic violence, we have libraries wasting and grossly misusing public money to buy a book which says: 'domestic violence is sexy'. The money would be better spent supporting victims.

Is this a good use of a bestseller widely panned as a bad book? Well, it’s probably better than just turning wood pulp into momentary bursts of energy.

I read this book AFTER my high school students, and I can't believe that 1) such terrible writing made the best seller list (how many times does the woman character point out how bossy and controlling Grey is in the first few chapters. Yeah redundant). 2) that this book has been hyped as being a sex fantasy for women when it lands a woman in an abusive relationship where he wants to control every aspect of her life. This book should be taught in abuse clinics and to young girls as examples of relationships NOT to enter into. Granted at the end of Book 1 she leaves the guy, but apparently there are 2 more books after, which I will not waste my time on, unless it involves a restraining order or the girl going Lorraina Bobbitt (it's been a long time I forgot how to spell it) on the guy.

Joshua Chaplinsky from New York is reading a lot more during the quarantine November 7, 2012 - 3:02pm

I think this is a bit misguided, myself. Maybe they should target Rihanna instead.

I think it's spot on. They can toss the pop music on afterward.

Courtney from the Midwest is reading Monkey: A Journey to the West and a thousand college textbooks November 7, 2012 - 8:01pm

Even though I hate her music, it's really hard for me to understand people vilifying Rhianna. Even if she is a victim of domestic abuse, it's her life. It happened once, which is once too many, but I highly doubt you're a close personal friend who knows enough about her to know why she's willing to be friends/musical collaborators with him.

From the point of view from someone who has experienced it, I'd rather be friends with the man who abused me than hate him. It makes a person sick to experience hate. I don't want to be his friend and I don't hate him, but if I had to make a choice... it would be an easy one. Truly hating someone destroys your soul, or at least mine.

It's no comparison to a book that literally tries to make repeated, constant sexual/physical/mental abuse sexy.