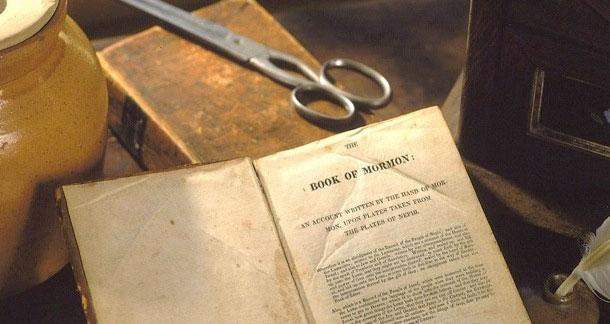 A riddle for your Friday afternoon: What do a Fender guitar, your old Honda, and a first-edition copy of The Book Of Mormon have in common? They're all worth more in pieces.

According to Mormons, the sacred book was written on gold plates and lost until an angel revealed the plates to Joseph Smith, who translated it and created just 5,000 copies in 1830. Until this week, Helen Schlie—owner of Mesa, Arizona, bookstore Rare And Out Of Print Books And Art—owned one of the 5,000. Mormons made pilgrimages to the store, weeping and taking photos with the scripture. Schlie, a converted Mormon, told visitors they were "sharing their DNA with Joseph Smith himself."

When the 88-year-old owner returned to her shop on Memorial Day, two young missionaries asked to see the holy text, but when she opened the fire-proof box where she'd left it over the long weekend, it was gone. At first, the motivation for stealing a $100,000 book seems pretty obvious: $100,000. But it might not be that straightforward.

There is speculation that the 182-year-old book was swiped not for the money, but to protect it from its scissor-happy owner, who had been slicing up the relic since 2005 and selling individual pages for $2,500 to $4,000 a piece. Though the Church Of Latter Day Saints had given its official blessing, claiming it would strengthen the faith of those who owned the pages, Schlie was a controversial figure among the community. Many members of the church felt that dicing up their most sacrosanct text for money was sacrilegious. Go figure.

So far, she had sold about 40 of the 588 pages, meaning that if she gets the mutilated volume back and continues parting it out at the same price, she stands to make between $1,370,000 and $2,192,000 off of it. Says Schlie: "It really hurt my heart. I'm hoping someone will bring it back, let it finish its mission." Look, it would hurt my heart to lose $2 million too, and I'm not even Mormon.

So the real question: Is stealing an artifact to save it (if indeed that's what happened) noble or immoral?

Noble, but personally I wouldn't call that book important enough to steal to rescue. Obviously someone did though, and good for them for doing something about it, instead of the rest of the religious community just deeming her "unpopular". It's funny that their leaders would condone cutting up the text in the first place. Makes you wonder how valid a religion is when the leaders are cool with the destruction of a rare text...

Joshua Chaplinsky from New York is reading a lot more during the quarantine June 1, 2012 - 1:38pm

I think it shouldn't be cut up because it is a rare book, not because it is 'holy.'. And no matter what the reason, stealing is technically wrong, so there's that.

Dwayne from Cincinnati, Ohio (suburbs) is reading books that rotate to often to keep this updated June 1, 2012 - 2:19pm

Stealing a book of a religion that says stealing is wrong? Not a good thing to do.

No better way to express your peity than to sell a faith-boost at $2500-$4000 a pop. Well, except for theivery of course.

No first edition book should be diced up and scrapped for parts. I can't say I would have the will to restrain myself if I stood to make that much money.

Miranda Moth from Guelph, Ontario, Canada is reading The Maze Runner by James Dashner June 2, 2012 - 11:19am

I actually can't believe all the "stealing is wrong" comments here lol. How about some more "destruction of rare books is wrong"; I guess right and wrong really depend on perspective. Stealing can be totally justified, think Robin Hood.

Dwayne from Cincinnati, Ohio (suburbs) is reading books that rotate to often to keep this updated June 2, 2012 - 6:04pm

Yeah, maybe if you havn't eaten in a week. Not by "I don't like what you are doing with your stuff."

I am a huge bibliophile, and have a small collection of rare books (not nearly as rare as this), but look, if I buy it, it's mine to do with as I please. There are a lot of ways to destroy a book, just by putting them on the shelf incorrectly, or smoking in your living room. While I, personally, value rare books as whole things that should be treated with respect and kept as pristine as possible, I don't really understand what whoever stole it was "saving it" from. Obviously the people taking it in pieces were getting something out of it, and likely, none of them could afford to buy the book in whole. Books are meant to do more than sit on the shelf and be handled with gloves, and she was getting mileage out of this one.

I don't have a problem with her cutting it up. I have a major problem with anyone supposing that their personal feelings about something that someone else owns gives them the right to take that thing.

Interesting news this is. As a non-american, i 'always' have to 'laugh' when those bloody mormons reach the headlines, except when Romney was announced to be republican candidate for upcoming president elections, i had to 'cry'......

And what a fucking 'scroodge' this 88year old is. Selling the book in one piece should generate sufficient money i geuss, but no no , tearing it apart and sell page by page. Hilarious.....  Maybe its time this granny should retire from the book-business.

I noticed in some of the reactions above, the general idea is when you 'own' something, you can do with it whatever you want. I dont agree.  To a certain extend this is right offcourse, but not all the time. In this 'case' the woman should be allowed to do what she thinks is right to do , because she 'owns' the book. Still i think its morally injust to tear up this rare historical important book.  If she wants money she should sell it as one piece, please.

Dwayne from Cincinnati, Ohio (suburbs) is reading books that rotate to often to keep this updated June 4, 2012 - 12:30pm

I'm guessing I'm the only one who is a fan of the rule of law. Sigh.

And what do morals have to do with this? A rare book only has value because people place value on it, which is why a first edition of Carrie is worth $7k and a first edition of Under The Dome is less than the cover price. The people who actually place spiritual and religious significance on this book think it is worth more in parts, and there is "moral" outrage over it? It's incredibly pompous to tell people what they should place significance on and how.

The "moral" issue here is simple. It is wrong to steal. Not only has the thief taken something of great monetary value, but they have also taken the opportunity of many to have a piece of something they consider sacred.

The person who stole the book, if they didn't steal it for its monetary value, obviously believed their cause to be righteous. For some folk a righteous cause gives you a free pass on whatever moral codes you need to break.

Dwayne from Cincinnati, Ohio (suburbs) is reading books that rotate to often to keep this updated June 8, 2012 - 4:30am

@mishmish - Well, no it doesn't. They might think it should, but as a literal issue of fact it doesn't.

And I don't think that it's sane to take up for someone who does. If I don't think a woman has turned dating me down for fair reasons can I kidnap her? If someone doesn't give enough to charity is it okay to just steal the difference? You can't have a functioning society that allows others to decide what happens with private property of another on individual moral grounds.