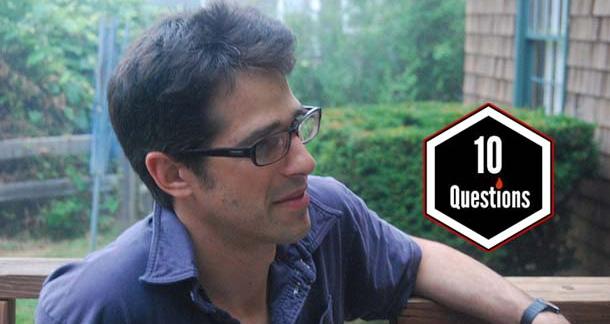 If there was an asteroid hurtling toward Earth, what would you do?

If you're Detective Hank Palace, the protagonist of Ben H. Winters' novels The Last Policeman and Countdown City, you don't stop doing your job just because the apocalypse is nigh.

Winters has a pretty deep bibliography—he wrote Sense and Sensibility and Sea Monsters and Android Karenina, as well as two books in the young adult Ms. Finkleman series, and Bedbugs, a horror novel.

The Last Policeman and Countdown City—the first two installments of a trilogy—cover a span of months from when the world learns of its impending destruction, through the slow collapse of society—a collapse that's gradual and utterly believable. In the middle of it all is Palace, a noble cop trying to do the right thing while there's still time to do it.

I wrote a series of very short stories about a pig called Piggy Wiggy, when I was in fourth grade. In each adventure, PW died spectacularly at the end (driven off cliff, eaten by shark, etc.). I have no idea what happened to them. If anyone out there has one, I’d love to see it.

I write standing up... Writing is a physical event; you are struggling with a manuscript, wrestling with it. When I am frustrated or thinking, I want to pace around the room, not slump back in my chair like a corpse.

It wasn’t my very first, but in my very early twenties I sold a story to the Chicago Tribune Sunday Magazine and I was so excited I threw my notebook up in the air, where it shattered the window of my apartment. I’m sure whatever I earned for that article barely covered the window.

I write standing up, with my laptop propped on an old dresser. Writing is a physical event; you are struggling with a manuscript, wrestling with it. When I am frustrated or thinking, I want to pace around the room, not slump back in my chair like a corpse.

I’m stealing this from Moss Hart, but my biggest mistakes were the times I said “yes” when I should have said “no.”

I am always pleased to discover, every time, that I possess the bare minimum set of skills to contemplate a novel and then create it. The specific catharsis of Countdown City comes from continuing to dream up new and challenging solutions for my hero, Detective Henry Palace, and being pleased that he manages to overcome them. For the most part.

Hm. I don’t know. Hamlet? Because he needs a drink, doesn’t he? I’d be like, come on, Hamlet. Take it easy.

At book stores. Small and interesting ones, whenever possible. I actually, most of the time, check books out of the library. I allow myself to go to the store pay actually money for mystery novels, because they are “research,” and also I think it would be cool to have a big collection of them one day.

Not well, generally. I believe everything everyone says, and suffer for it. It’s a funny thing about being a professional creative artist: you have to be empathic and sensitive enough to create the emotional lives of made-up people, but sufficiently tough and thick-skinned to weather your work being out on the table like spilled guts.

The worst advice, of course, is “write what you know.” No. Write what you want to know. Be curious and interested about other people and things, satisfy that curiosity, and let your new knowledge inform your work.

WILDCARD: In the Policeman books, people frequently "go bucket list"—attempt to fulfill lifelong dreams while the earth is still in one piece. If there was a meteor bearing down on the planet and you have a few months to spare, how would you go bucket list?

You’re not the first to ask, and I wish I had a better answer. I would hang out with my kids, and my wife, and try to read a lot of the books I haven’t had a chance to yet. Oh, and I’d eat lots of Red Vines, if they kept making it.

Great answer to the worst advice question! I just bought The Last Policeman yesterday, and I'm really looking forward to reading it.