Feb 7 : Writing the Vampire with Stephanie M. Wytovich
Feb 14 : The Craft of Character with David Corbett
Feb 21 : Lean, Mean Writin' Machine with John Skipp
Mar 9 : The Source Code of Storytelling with Rob Hart
Mar 14 : Graphic Design 101 with Matthew Revert
Mar 21 : Stakes in Storytelling with Hannah Fergesen
Apr 4 : Logic and the Unconscious: How to Write Like a Maniac, Then Like an Engineer 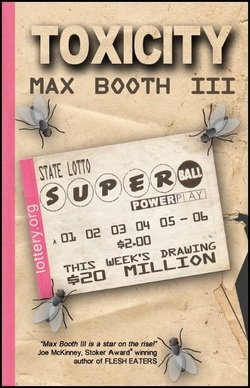 Synopsis: Oh to be a fly on the wall ...
When Maddox Kane is released from prison after serving a ten year stretch, he has one thing on his mind: reconnecting with his daughter.
Problem: his ex-wife and her new junkie husband have other plans, and it's going to cost Maddox a small fortune to buy his share of custody. His daughter, on the other hand, has other priorities to attend to--such as coming up with enough cash to skip town before the cops find a certain body decomposing in the woods.
Darkly comedic and absurdly tragic, TOXICITY is a tale of horrible things happening to horrible people.

Author: Max Booth III is the author of two novels: Toxicity (April 2014) and The Mind is a Razorblade (September 2014). He has also written two story collections: They Might Be Demons and True Stories Told By a Liar (now out of print). He is the co-founder and editor-in-chief of Perpetual Motion Machine Publishing.

Since 2011 he has been the Assistant Editor of Dark Moon Digest and has edited numerous anthologies. He writes online for LitReactor, Zombie POP, and Revolt Daily. He has studied under Craig Clevenger and award winning editor, Jennifer Brozek.

Max was born in Northern Indiana. He has worked as a cashier, stockboy, copy editor, and hotel night auditor. He currently lives in San Antonio, Texas with his life partner and dachshund. Follow him on Twitter @GiveMeYourTeeth for random drunken ramblings and visit him at TalesFromTheBooth.com.

He is currently working on his third novel, Giving Up the Ghost.

Sorry I'm a little late with this one. I've been super busy at work and have had limited internet access.

Max approached me a while back about this. And after reading a bit about it and seeing the blurbs, I was disappointed that we couldn't get to it sooner. From what I hear though, the wait is worth it. It should make for a pretty good discussion.

Excellent news! I am looking forward to this very much, and can't wait to answer any questions you may have. This is going to be fun.

Sounds great. Just brought a copy, hope to have it read in time for bookclub :)

Plan on buying a copy and enjoying my first bookclub experience here at Lit.

Going to get it this weekend.

@Pete - You always do an excellent job of introducing us to the book of the month!

i'll be sure to chime in. wild book.

Okay, so the discussion on this can begin. Did anybody get a chance to read it in time?

With this novel - my debut - I wanted to write something in the same sort of style as LOCK, STOCK, AND TWO SMOKING BARRELS. I'm in love with the dark comedy/crime genre. I'm also a big fan of Tarantino/Coen Brothers, and I wanted to bring that ultra violence/dark comedy crossover into my work.

What did you all think? Any questions?

I like that style; they're popular with audiences, so you should get plenty of readers. Am going to finish Toxicity this week; so far I'm really enjoying it!

i thought it was a wild book. here's my blurb:

“TOXICITY seeps under your skin, infecting you with black comedy, shocking violence, and the stinking desperation of bad people rotting in the sun. And yet somehow, we still root for these dark souls—and that is the genius of Max Booth III.”

i'll be on the road and offline a bit but i'll try to stop by, especially by the end of the month.

i'll toss out a few softballs.

max, where did the idea for this novel come from? you mention a few films and directors, were they direct influences on this book, or are there others?

(side note, how are you digging the Baer trilogy? i see that in your profile there. are you done?)

I was a 12 year-old kid bored out of my mind. I wanted to write. I'd written before, but never anything I felt (at the time) was worth a damn. I wanted to write something I truly understood. So, I picked up a notebook and pen and began writing about a dysfunctional family. The family was basically my own family. Each character was a doppelganger of someone I already knew. I made them win the lottery, because at the time, I would daydream about winning the lottery and escaping the suburban ghetto. So, the initial idea came from my own attempt to predetermine a ridiculous yet fantastic future for myself and my family. I realized not too long into the story that my family would never spend their lottery winnings wisely, so that is where much of the humor and absurdity originally sprung from.


After so long, I also realized I had no idea where to go with the story, so I brought in gangsters with guns. They came into the family's house mean and blood-hungry. These gangster characters were largely underdeveloped and stereotypical, so I went back to the beginning of the story, and told it through the gangsters' POV, what they had been up to while the family won the lotto and destroyed their newly found fortune. Just by exploring these other characters I was able to discover a whole new plot to intertwine with the existing lotto story. I made these characters breathe and, as one crazy thing after another occurred, the overall plot showed itself to me.


I rewrote the book many, many times throughout my teenage years. I'll be 21 this Friday, and the book was published this April. It's been a long road, and the book is nowhere like what it once was back when I first started writing it. I know each character inside and out. I am proud of them. None of them are flawless, and that is what makes them beautiful.

very cool. man, wild story of how that came to be. (cool on Baer. finish it, the last one is wild)

First off, nice work, Max. This is a cool book.

I'm going to hold off on speaking to the content of the book, seeing as how I already wrote a review of it over here. So I want to start by asking you what you prefer to write, horror stuff or crime stuff? Do you lean a certain way, or are you still excited to write whatever comes to you?

Also, how was it working on a much longer book that your previous flash collection and novella? Did you like it better, being able to stretch out a bit, or do you prefer the shorter works?

Also, if you had to make an all-time Cubs lineup, would you include Mitch Williams in the closer role, or would you go with Lee Smith? Or someone else altogether? And how do you feel about the Jeff Samardzija trade? Do you feel like this is a good move, or do you feel like this shows that the Cubs are STILL in the "rebuilding" mode, same as they have been since the 1980s?

I'll hang up and listen to your answers.

Hetch Litman from Somewhere in the mountains of the Pacific Northwest is reading The Violent Bear it Away by Flannery O'Connor July 6, 2014 - 12:26pm

Going to grab this on the fire. Look forward to re-joining LR book talk after an extended absense.

Hi Sean, thanks again for that awesome review. Glad you didn't hate it too much. I enjoy novel writing a lot more than I do short fiction writing. I prefer to flesh out characters over a wide space of time and to unravel plot at my own pace, rather than be confined to a short story's limitations.

Also, you know way more about the Cubs than I do. I don't recognize any of those names. You're scaring me!

Thanks Hetch! I look forward to hearing your thoughts!

Wait...did you just say you're about to turn 21? Like, 21 human years? Wow, looks like you've got a great start on things.

I was recently interviewed and I was asked to come up with a cast list if TOXICITY were to be adapted into a film. You can read the interview HERE, but I'll list the cast I came up with below:

What do you think of my choices? Who would you have cast differently? What other characters/actors would you add to the list?

You are such a newbie!! sorry, couldn't resist. Truly you are young for what you have accomplished, kiddo. Good on you.

You have some good players on your list. I would encourage you to look a little farther afield for some of the new talent. Not sure he'd fit your cast, but Ezra Miller is a promising candidate.

I started reading this a few months ago, Max. I promise to finish by the end of the year!