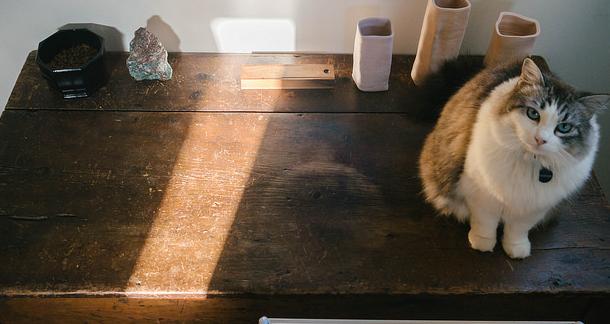 But really, what is it with writers and cats?

My cat Buttons is sitting on my lap as I type this, so I’m taking the opportunity to examine why I like having her around so much.

"Having a bunch of cats around is good." —Charles Bukowski

First of all, she’s cute as hell. I mean, on a scale of 0 to Death, this kitty’s got some killer cutes. She has big green eyes and a little pink nose, plus long whiskers and very soft, fluffy fur. Her purring is soothing, more effective as white noise than the background sounds of a coffee shop or music through headphones. She’s warm and snuggly, which is awesome for everyone, and if you pretend it’s not I think you probably have to be lying. And she wants to stay on my lap for pretty much as long as possible, which is highly flattering. She’s great incentive to keep my ass in the chair and work, because I don’t want to disturb her. On the other hand, she’s the perfect amount of distraction when I need it. Not so much that she pulls me away from writing, but enough that when I need a long pause to think something through, I can just look down and admire her (maybe throw in a few extra pets to keep the purrs going) until the answer comes to me.

What does Buttons get out of the deal? Well, a warm place to stretch out and receive occasional massage services. The quiet of my office, plus the gentle background noise of my keyboard. The simple companionship of someone who loves you so much she’ll stare adoringly while you do nothing, telling you you’re doing a great job doing nothing. (I wish someone would do that for me.) Sunshine in the window, birds to watch outside it, occasional stacks of paper warm from the printer to lie on (warmth seems to be a trend—don’t forget the laptop), and easy access for dinnertime reminders. And maybe, just maybe, she actually likes me as much as I like her? Hard to say.

Sentimentality and practicality aside, there does seem to be a deep, undeniable affinity between writers and cats, much more so than between the general population and cats or even between writers and other types of pets. Of course there are exceptions, but countless authors are feline fanatics, with famous writers such as Edgar Allan Poe, Ray Bradbury, T.S. Eliot, Neil Gaiman, Ernest Hemingway, Joyce Carol Oates, Charles Dickens, Judy Blume, William Carlos Williams, Mark Twain, and many more waxing poetic about the greatness of teh kittehs. What’s up with that?

Mark Twain said, “Of all God’s creatures there is only one that cannot be made the slave of the leash. That one is the cat. If man could be crossed with the cat it would improve man, but it would deteriorate the cat.” In this quote I see admiration, respect. As affectionate as my Buttons is, my little boy cat Snaps keeps his distance more often than not, preferring to be in the room but not on my lap, and if anything it inspires a type of solemn awe in me. If he would rather perch on the back of my chair than in my lap, shucking petting for a view of the yard, I can hardly blame him. He is his own entity with his own desires and follows them unquestioningly. 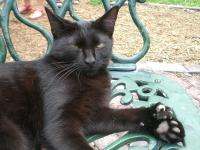 Which is maybe another part of the appeal. Cats don’t front. Earnest Hemingway (famous for his large collection of polydactyls, or six-toed cats) said, “A cat has absolute emotional honesty: human beings, for one reason or another, may hide their feelings, but a cat does not.” If I try to pet one of my cats when they’re not in the mood, they’ll nip my hand to let me know to stop, and isn’t that kind of refreshing? No passive aggressiveness—just clear and unselfconscious communication. Stop it. I am in charge of my own self, and I say when I do what.

Maybe it’s even deeper than admiration. Maybe it’s a call from soul to soul. Here’s Joyce Carol Oates: “The writer, like any artist, is inhabited by an unknowable and unpredictable core of being which, by custom, we designate the ‘imagination’ or ‘the unconscious’ (as if naming were equivalent to knowing, let alone controlling), and so in the accessibility of Felis catus we sense the secret, demonic, wholly inaccessible presence of Felis sylvestris. For like calls out to like, across even the abyss of species.”

Perhaps it is that cats are such complex, lovely, fascinating creatures, and as keen observers of detail and life, writers are drawn to them in the same ways we’re drawn to nature, people-watching, and travel. There is something there to be gleaned, to learn. Aldous Huxley wrote, "'My young friend,' I said, 'if you want to be a psychological novelist and write about human beings, the best thing you can do is to keep a pair of cats.'"

There is, also, the oft-drawn correlation between cat people and introverts, both of which also correlate strongly to writers. Most writers I know need lots of time in private, alone to think, process, and work undisturbed in a quiet, secluded place. We go out into the world to experience life, and then we retreat from it to process life into our writing. The home becomes a safe base, a sacred place of self and art. One’s cats, therefore, become living fixtures there. Jean Cocteau said, “I love cats because I enjoy my home; and little by little, they become its visible soul.”

Or maybe I’m just overthinking it, as writers and cat people are both wont to do. Edward Gorey sums it up nicely: “Books. Cats. Life is good.” 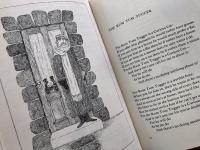 Speaking of cats, books, and Edward Gorey, he did the fabulous illustrations for T.S. Eliot’s Old Possum’s Book of Practical Cats—a match made in heaven, if you ask me. What’s that? You only knew Eliot for his dark, existential masterpieces like “The Waste Land”? Well, prepare to have your minds blown then, friends. Practical Cats is one of the silliest, most delightful books you’ll ever buy. I’d almost say it’s my favorite cat book, except…

Poe is one of my favorite writers, but I can’t in all honesty say “The Black Cat” is my favorite cat story because, well, things don’t end well for that cat. But lest you think poorly of Papa Poe, know that he (like Stephen King, who also wrote a few ill-fated felines) actually deeply loved his own black kitty: “The writer of this article is the owner of one of the most remarkable black cats in the world — and this is saying much.” Her name? Catterina, of course. We’re not above puns, here.

So what is my favorite cat literature? Hands down, the honor goes to the children’s picture book The Cat Who Wore a Pot On Her Head by Jan Slepian. Does anyone else remember this old classic? It involves Bendemolena, a well-meaning kitten who likes to wear a tin pot on her head. (Go with it.) With her ears covered, she mishears all of her mom’s assignments and instead does hilarious alternatives that rhyme—things like nailing the chairs to the wall and putting soap in the cake. It’s just so freaking cute, y’all.

What is it with cats and writers? Probably something more complex and far simpler than anything I’ve mused on today. Rather than overanalyzing it further, I think I’ll just enjoy it. Buttons just got up to stretch and I might go do the same. She’s a pretty good role model, after all. ;)

Do you have a favorite cat/author combo? A favorite book about cats? A favorite book written by a cat? Have you written a twenty-page epic poem about your cat Mr. Whiskers? I want to hear about it all in the comments.

The basic explanation between the segment of discretionary school course and grown-up organizing is that both handle unmistakable illuminating style. I want to hire best essay writing service 2020 for help in essays. The wellspring of heading and reason for the mix of an understudy is what's all the more completely important.