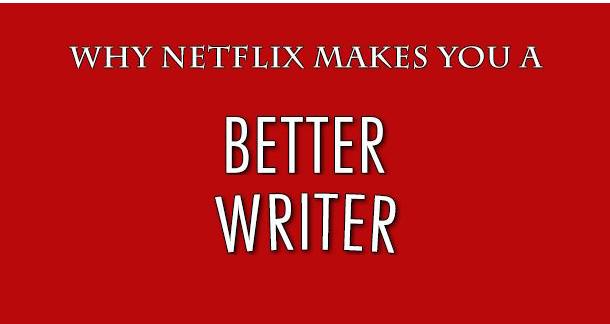 When I use the term "Netflix," I'm referring, yes, to the biggest website for streaming movies and TV shows. I'm also referring to the huge number of other stream sites, including Hulu, YouTube, Amazon Instant Video, and even the web-based "on demand' features of many cable networks. This online streaming culture allows us to consume media in a way that helps us to better understand the craft that went into each film or TV series.

Are you finding that difficult to swallow whole? Consider this:

Netflix lets you experience new, original, and experimental media without major risk; the next movie is just a few clicks away.

Will this eventually lead to humankind being enslaved by AI? Yes. Obviously. But in the meantime, we can take advantage of the system.

What's that? You don't want to write movies and TV shows? You're a pen-to-the-pad traditionalist? Here's a thought:

That doesn't matter. At all.

Expanding Our Definition of the "Written Word"

As the ultimate proof that modern authors are multi-medium, Roald Dahl wrote the James Bond film You Only Live Twice.

Joss Whedon is better than you. That cross-medium madman has penned movie scripts, TV shows, comic books, web videos—you name it. To the list of cross-platform creatives, let's add Neil Gaiman (who's written books, graphic novels, movie scripts, and even an episode of Doctor Who), Ray Bradbury (who wrote a film adaptation of Moby Dick), and William Faulkner (who wrote The Big Sleep). As the ultimate proof that modern authors are multi-medium, Roald Dahl wrote the James Bond film You Only Live Twice.

Besides making you feel small and insignificant, what's the point? Simply this: Today's writers are breaking the boundaries of single-medium work, and the same skills that apply in one arena can apply in all other areas of the writing craft.

The writer who looks only at their own creative medium can learn astounding amounts in that process. However, it is not only the creative works displayed as ink-and-paper that can inform us. By paying attention to the subtleties of television, film, and other media, we gain outlets that empower our own work.

Here are some specific lessons to consider.

Imagine you're running an audition for a TV show. After witnessing a lackluster performance from one potential actor, you give the advice, "Try it again, but this time I really want to feel your anger." The actor then steps back onto their mark, opens their eyes, and screams out, "I'm angry!"

Why isn't that convincing to us? And, more to the point, why do we still allow ourselves to write "Bob was angry" in our creative work? By paying attention to the nuances and subtleties used by actors to show emotion, you can improve the "show don't tell" aspect of your writing, especially when it comes to showing the inner worlds of your characters. We can move from "Bob was angry" to

Bob clenched his teeth. His nostrils flared with each slow breath. The way his cheekbones tensed upward pressed his eyes to narrow slits. A pencil-thick vein bulged along the left side of his neck.

We can learn countless lessons about writing by paying attention to actors. Think of the way that, in Painted Veil, Edward Norton says "quick" with special emphasis on the "k," showing his bitter anger with a single sound. The way Walter White (played by Bryan Cranston) in the hit TV show Breaking Bad uses long periods of silence and tiny facial twitches to show anxiety. Or hell, even the way Pinkie Pie uses different intonations of the term "okey dokey lokey" to express about a hundred different emotions in My Little Pony: Friendship Is Magic.

These are professionals trained in using body language and tone of voice to convey emotions without having to scream out what those emotions are. If you want your characters to effectively express themselves without jumping down your readers' throats, consider giving them some acting lessons.

If film and television have an advantage over novels and short stories, it's that the visual mediums can invest hundreds of thousands of dollars into scenery, costumes, and other forms of eye candy. Lacking this ability (and having no idea what "hundreds of thousands of dollars" would even look like), many creative writers allow themselves to trail over visuals in a cursory way.

I'm not trying to argue that you should spend endless pages setting a beautiful stage only to have a short scene take place. However, by paying attention to the visual details that most stirred you, you can gain a better sense of what descriptions will have the greatest impact. Instead of "Jim and Sally walked into a big, white room," we can move toward:

Jim walked across the shale-gray tiles of the room without a glance at his surroundings. Sally's eyes darted around the stark whiteness of the drywall, finally resting on the ficus-green drapes of the room's only window. That is, if you counted it as a "window." At best it was twice the size of a shoebox.

(Opinion time! The use of highly specific colors in my description above: Do they help create a rich visual or are they simply too much?)

Captain Malcolm Reynold's red shirt and brown pants synchronize with the maroon and gold decor in Inara's shuttle in several scenes in the tragically shortlived series Firefly. In the BBC Sherlock (one of the best-written shows in the world), clues are subtly embedded in background visuals, making the second viewing more than worthwhile. Downton Abbey's claims to fame boil down to constant scandal and stunning costume design. Learn from the investments of eye-candy-obsessed studios. Feed your inner eye.

Talk During the Movie

The above examples are just the beginning. I recently wrote an article on writing organic dialogue that drew heavily from Firefly, How I Met Your Mother, and Lie to Me. TV shows demonstrate how to maintain cohesion in a story, even as the audience faces year-long gaps in episode production.

But perhaps more important than a list of areas where online streaming can now be used to inform our writing sensibilities, let me elaborate briefly on how we can make the most out of these lessons. My advice boils down to three actions you can take to lead your Netflix-based education:

Online streaming provides writers with one of the most educational playgrounds around. By keeping your critical eye open as you watch, by looking at movies and TV shows as part of the writing craft, and by paying attention for lessons that film and television teach especially well, you can hone your craft in powerful ways. And best of all? You can now justify all your obsessive video streaming.

I'd like to add that Netflix is how I learned of Jack Ketchum--I streamed the adaptation of Red and had to look him up. I love Netflix. It was one of the things I was thankful for in November. I only know who Walter White is because of Netflix. [Gotta love the Cranston and Norton references.]

I also like how you say that Whedon, Gaiman, and Bradbury are better than me with the antagonistic air of someone making a daring pronouncement. Unintended ego boost.

This is some mighty fine advice.  Goes to show you don't have to enroll in a Creative Writing program to learn the craft.  There's great material to study all around us.  Thanks for Article.

Own stock in Netflix do we?

I have to laugh at the bit about the risk of not liking what you might have rented back in the 'Blockbuster' days. I suffered for many years from an undeserved reputation for having appalling taste in movies simply because I couldn't help myself from exploring titles that I'd never heard of; usually resulting in a one in ten success rate.

I tried to explain right through my younger years that my renting of a succession of low-blows to the art of movie-making had nothing to do with my personal taste and everything to do with a desire to root out rare gems, but alas my assertions were received with less credulity than most of the god-awful crap I used to drag back from the video shop.

At least now I can vet movies without ruining everybody's night in. People even ask me for recommendations these days, instead of going to elaborate lengths to sneak out to rent movies without me.

@Bret: I'm glad you got an ego boost out of that. I just want to be sure everyone understands the pecking order. ;P

@Tom: My pleasure. There really is a mass of material to learn from, especially in the internet era. Hell, my scansion improved after I started watching Epic Rap Battles of History.

@Frank: Nope. After the fiasco of Qwikster? Are you kidding me? Streaming video is a Godsend, but I wouldn't trust the management of Netflix with a wooden nickle.

@Arson: I was on the opposite end of the spectrum. My movie selections were repetitive---safe. It's great to have the risk barrier lowered so I can watch different types of movies. Some of which wind up being terrible (I still can't believe that The Human Centipede 2 even exists) while others turned out to be wonderful (Ink seemed bizarre up front, but is now one of my favorite films).

Netflix is one of the best things in the world. It will improve your writing skills and help you become a better writer. I have used Netflix for many years, and it has helped me improve many areas of my life. The programs on Netflix make me a better writer and are available for any device that can connect to the Internet. The importance of all of these programs cannot be overstated. https://veepn.com/vpn-apps/vpn-for-android/ helps us find our passion in entertainment, so we can stay motivated throughout our work on our papers. Netflix also makes it easier for us to stay organized in our papers, which helps us write quicker, more easily, and efficiently!