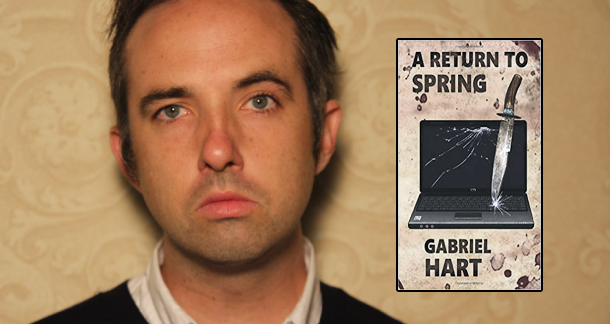 Last month, Mannison Press released my riot-noir novelette, A Return to Spring — a fictionalized, alternate history of the 1986 Palm Springs Riots. The ’86 Riots were a true-crime event that altered that city as we knew it, putting an end to the Spring Break destination for Southern California high school/college kids, ushering in the town’s quieter, more civilized demographic that we see there today. The ’86 Riots was mob mentality at its worse; women were assaulted, blows were thrown, general dignities compromised — many see it as the city’s Altamont of eighties excess, an end of an era. Even the typically cheery mayor Sonny Bono had to brandish an uncharacteristic iron fist to regulate —and eventually eradicate — the annual event that brought tons of revenue into the Playground of the Stars.

So why is it that the Palm Springs Riots fell through the cracks of history outside of the ones who attended?

One, the city would prefer a glossing over. Since the riots were a blight on its clean, Modernist reputation, naturally City Council wouldn’t opt to preserve it as even a cautionary tale. With real estate a huge economic asset, it would be illogical capitalist instinct to give any clues that the city once lost control of itself.

Two, it was timing. Over a decade before cellphones and the Internet, footage of the riots didn’t appear until thirty years later, when a VHS time-capsule piece of gold was unearthed onto the Web. While we claim the “Internet is Forever,” we often assume “if it’s not on the Internet, did it really happen?” — like the quantum-adage of “If a tree falls in a forest…”

Think of all the writers in America or beyond who might be overlooking their own town’s checkered pasts to exhume regional ghosts of human folly.

Infamous and iconic as Palm Springs may be, I believe its remote desert location — away from Los Angeles’s big city media tentacles — lends to events like this being preserved in amnesiac amber, another entry into its history of forgetting. I can’t help but think of all the writers in America or beyond who might be overlooking their own town’s checkered pasts to exhume regional ghosts of human folly.

There is something so uniquely haunted about the American underbelly, which in turn, contain blights so specifically related to American deception, it’s as if they can’t occur anywhere else. Our death-grip on the American Dream that drips from our fists into the American Nightmare, our delusion of independence and prosperity stubbornly overstaying its welcome until it becomes the antithesis. Then, the cover-up always imminent — our pride pushing it all under the rug instead of really attempting the deep clean.

Of course, there’s the well-tread, high-profile stories of our culture’s desperation pushed to extremes. For example, our preoccupation with serial killers (or school shooters, pick your poison), who we seem to psychically manifest until our culture nurtures them into being; satisfying a sick national fetish to justify our own righteous hypocrisies.

But think about all the stories that fall under radar, which sculpted your town into the place it is today. Because of their immediate proximity to us, I believe these are the most consequential to our municipal relationship. It’s up to you, as a storyteller, to preserve them past their ever-disintegrating barroom whispers.

It can be a slippery slope — a fine line between raising visibility of an overlooked occurrence for a more empathetic document  (like I can only hope I achieved with the Palm Springs riots) as opposed to exploiting an incident whose participants/victims would much rather forget; personal events that are simply none of our business, even if they’ve been previously reported by the local media.

Think of all that gets lost, even cheated out of a headline. Sure, you get the facts — but as the mere data of the incident is the only thing preserved, we are frigidly removed from the human element.

By wielding the tool of fiction, a writer can remedy this.

By forming an original story from a forgotten event, we give it a fighting chance as a hard lesson for everyone to learn from. What died unceremoniously as yellowed newsprint in your grandma’s garage can become an overdue point of reference. Our re-imagined take can give a voice to the neglected, reconstruct the dignity crushed into the trivialized soundbite, extrapolate possibilities from mysteries unsolved — using fiction to breathe new life into irreconcilable emotions otherwise buried in the dust of time.

Your civic duty homework this year (pandemic-dependent): Find out how well you know your town’s history.

1. Visit your local library or university

Carve out an afternoon to trip out on the microfilm index. It’s an addicting yet enriching rabbit hole of tragedy, triumphs, and incongruent weirdness, much of which you will not ever find on the Internet. The Web can mirror the present while adapting to our unfolding future, but it will never catch up with our past.

2. Befriend a senior citizen or two — pick their brain

There is an ever-widening generation gap between our elders and us, and soon they’ll be gone — along with that distinct treasure trove of first-hand experience and hard-earned wisdom. Your typical senior will likely be chomping at the bit for a chance to hold court to you with their legacy. And if you consider the iconic, mold-breaking decades today’s 70-90 year-old lived through, there is going to be a lot there, told with a unique, anecdotal perspective you’re just not going to get anywhere else.

Whether you support ‘em or abhor ‘em, we can’t deny your local police will have a unique angle on your city. It’s almost guaranteed you’ll never see some streets the same again after hearing them rattle off scenes of crimes through the patchwork of their patterns. Most cops will be glad to re-stroke their egos through stories of their beat, especially if you tell them you’re a writer. All that’s typically required for a Ride-Along is to be over 16, have a clean criminal record, and a signed waiver they provide.

Get A Return to Spring at Amazon.

I love this whole story . I am by profession a Real Estate Agents for Park View City Islamabad.