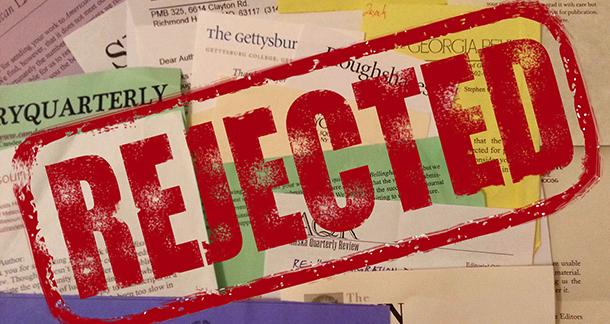 Most writers who publish with any regularity are familiar with the soul crushing experience of sending out a story, only to see it systematically rejected by ten, twenty, fifty publications at a stretch. The process imparts this uniquely slow sinking feeling, wherein writers find themselves counting the facsimile slips that come back, one at a time, many of them printed on inappropriately colorful paper, wrought with placating gestures like “this story just wasn’t right for us,” “we wish you luck placing it elsewhere,” and “please, submit again!”

Beneath these troubling developments the writer may feel some waning enthusiasm for the project, a tacit acknowledgement that perhaps, just maybe, the story they worked on for months is no good. To be clear: this crippling self-doubt is far more damaging than the spates of rejection that all writers face at one time or another. It’s one reason many quit altogether.

While rejection is always a bitter pill to swallow, it’s actually one of the greatest critical tools there is...writers should learn not only to accept rejection — they should embrace it.

It took me years to figure out I’d been looking at this process all wrong. While rejection is always a bitter pill to swallow, it’s actually one of the greatest critical tools there is. It might sound strange, but writers should learn not only to accept rejection — they should embrace it. After time, you may realize rejection has played an undeniable role in strengthening your work; you may discover you’ve improved your craft not merely in spite of being rejected, but because of it.

I don’t mind admitting that I’ve been turned down, at one point or another, by virtually every publication out there. For starters, I realize stories that were once mediocre were later strengthened when universal rejection eventually compelled me to ask myself: what isn’t working here? More important, I also realize some of the best critical feedback I’ve ever received has come not from peers or workshops, but from editors who rejected my work, and then took the time to tell me why they did so.

First, let’s highlight the obvious. Rejection can work as a litmus test to show whether a story is premature for publication. Some writers are harder on themselves than others; if you’re anything like my younger self, you may have a habit of sending out work before things have really started to cook. Rejection is a reality check; it asks the writer to step back and look at the work with a more critical eye. After a while, after it seems everyone with an ISSN number has shot you down, it may dawn on you to consider that the work is still too early in the drafting process to be considered complete. I don’t know about you, but I’d rather take the time and get the story right than receive another notch in the publishing belt for a half-baked effort I’ll be embarrassed about in a year anyway.

Then there’s the real silver lining, when rejection manifests itself in the form of a helping hand. Occasionally, if your story lands on the desk of a particularly gregarious editor, they may take the time to tell you why they’ve declined taking it. Depending on how much they liked it — or how much time is at their disposal — they may even write a personal note on the rejection slip detailing what they think would make the story better, or scribble advice in the margins of the returned manuscript. Sometimes they even send an email.

In case you’re still not with me here: these editors are giving you critical feedback. You’re basically getting a top-shelf writing critique for free. This is worth its weight in gold, because you’re getting detailed guidance similar to what you’d encounter in a workshop, only by a seasoned pro who knows better than anyone what it takes to land a piece of writing in print. Best yet: it cost you nothing more than a postage stamp.
This is yet another reason why writers should constantly be engaged in the (admittedly) arduous process of sending out work. When the writer begins using industry rejection as a critical tool, temporary dismissal becomes less of a death-sentence for your story and more of an ongoing dialogue that will improve the work — and your overall skills — in time.

There’s something else that bears mentioning. Those editors who offered you critical feedback, the ones who were nice enough to take the time to respond personally to your work: these people are now your contacts. Keep them on file, and make sure to hit them up when you have another story ready for publication (and one you think could be a good fit for their journal). Remind them about the time they wrote you and expressed an interest in your work. Tell them how much you appreciated their advice, and if their feedback helped you get the work published elsewhere. You may have found a way to bypass their slush pile.

Also, look on the bright side. Editors are a distant and capricious bunch, though by no fault of their own. Journals are understaffed, staff is overworked, and they’re hit with more submissions every month than anyone can possibly read (hello, interns). A bit of math will tell you that if a publication receives in excess of 1,000 entries an issue, and someone took the time to write you a detailed letter regarding what they thought about your story — even if it’s just a few lines — obviously, your work offered something to bring it several steps in the process away from the utility closet. Even if your pride has taken a hit, you can find solace in the fact that you’re clearly doing something right.

Great article, Jon. I've already found that a rejection with personal comments and encouragement from an editor has been more valuable to me than if said story had actually been published on the site. I've even gotten solicitations from one of those editors to send me whatever I've been having trouble getting published elsewhere.

I agree partially with what you say, but I worry that your advice will lead some newer writers to begin rewriting a story after every rejection, which is (imo) a great way to kill a story. Often a rejection is not about a story's quality, but about the fact that it's not the kind of story an editor is looking for, or resembles a story recently published, etc. Editors have a nebulous sense of their magazine's "feel" and may turn down stories that are quite good on their own but don't mesh with that feel.

I don't know how you got all those editors to write you personal comments on a rejection slip; I've never gotten anything beyond a form letter that says, "This isn't right for us," or "We're going to pass on this," or some other vague, all-encompassing blurb.  I've submitted novels to agents and short stories and novelletes to magazines and all the rejections have been uniformly uninformative.  The only way I get feedback is to pass my work through a critique group, but those groups are largely unpublished authors trying to do the same thing I am: get published.  I intend to keep trying, certainly, but this is the first I've heard that an editor will actually give feedback.  I'd always heard  (as you mentioned) they were too busy to take the time to make a comment or two.  I would love to get a comment from an editor.  Oh, well.

JonGingerich from New York City is reading Tenth of December by George Saunders. May 22, 2013 - 1:51pm

@ Cat Rambo I hear what you're saying, but I'd seriously question the mental well being (or at least, the gross lack of self-esteem) of anyone who would rewrite a story after every rejection he/she receives. The idea here is that mass rejection — i.e., when it appears virtually everyone has refused to take your story — can clearly wear on one's confidence in the work over time. Instead of conceding defeat or otherwise throwing in the towel on the work, there are several ways writers can use the process as a primer for reevaluating and re-envisioning the work. In this sense, the query/acceptance/rejection imbroglio of publication can be seen as yet another critical tool. Of course, you are correct — and it should probably go without saying — that different editors want different stories for different publications (and they’ll all probably give different advice too, for that matter). Thanks for reading.

I've just sent my first short story off to a magazine and am now eagerly awaiting my rejection slip... which I will frame and mount on my wall.

But you're right. I've read dozens of stories about now-famous writers who got turned down by almost everybody (JK Rowling, Dean Koontz, etc.) until someone just thought, sod it!, and they went on to literary esteem and megabucks. Maybe sometimes the story is just shite, or the writer can't write, but most of the time it is, like the saying goes, 10% inspiration and 90% perspiration.

I think getting published has less to do with writing ability and more to do with sheer tenacity and stubbornness. A thick skin and thicker head will often rise above a mastership of the craft and rainbow flakes of a hundred muses.

Thanks for the article. I enjoyed it.

Dwayne from Cincinnati, Ohio (suburbs) is reading books that rotate to often to keep this updated May 29, 2013 - 9:57pm

This is a good idea in theory, but doesn't it sort of over look the fact that most rejections are done without anyone reading the work? I know you say occasionally it is a helping hand, but isn't that actually very rare?