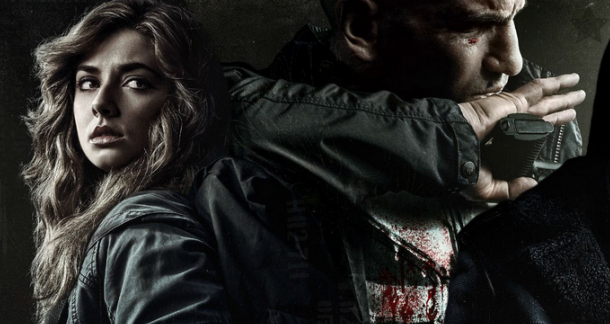 The last time I wrote about Netflix’s The Punisher, I was severely disappointed. The show had fundamentally misunderstood its main character, and wasted a ton of screen time sanding off all the hard edges that make Frank Castle interesting, in a misguided attempt to make him a more “likable” protagonist. Much to my dismay, the second season of The Punisher repeats all of the sins of its predecessor while adding a host of new ones. It’s not just a bad Punisher story anymore, but also one of the most poorly written pieces of television I have ever seen, full of lazy dialogue, haphazard plotting, and mind-boggling stupidity. Let’s take a closer look at exactly how bad they fucked up, in the hopes this might never be repeated.

Firstly, someone flung The Punisher’s script from the tallest cliche tree they could find, and it hit every last branch on the way down. The very first episode begins with the most tired trope in comic books. Frank has a romantic encounter with an attractive bartender and meets her son. My girlfriend and I both groaned aloud as soon as the flirting started, because we knew exactly where it was headed. It did not disappoint—the woman gets fridged before the credits roll.

One of the most poorly written pieces of television I have ever seen, full of lazy dialogue, haphazard plotting, and mind-boggling stupidity.

If you’re not familiar, “fridging” is the common practice in comic books (and now other media as well) of brutally killing off a female character simply to motivate a male character’s action. The term comes from a Green Lantern storyline in which Kyle Rayner discovers his girlfriend’s dead body in his refrigerator, thus necessitating a quest for revenge. A whole episode of The Punisher is wasted setting up the bartender’s telegraphed tragedy, as if Frank needed a reminder why he started murdering criminals in cold blood. Then, because the episode wasn’t quite cliche enough, it trots out the second most overused action movie premise: a threatened young girl who just happens to stumble into a hardened badass willing to protect her. With a murdered love interest and an imperiled teen, all you need is a comic relief sidekick to complete the trifecta of triteness. Thankfully, the show never sinks that low, but before the end of the first episode Frank has been transformed from the Punisher into the generic B-grade action hero you can see literally everywhere.

While the comics have never been shy about borrowing plots from action movies, the original material is usually substantively changed or subverted by the involvement of the Punisher. He is neither a traditional good guy, nor your typical antihero with a heart of gold. His goal is not to defeat the bad guy, save lives and make the world a better place. His code won’t allow innocents to be harmed, but he does not care what happens to them as long as they are alive. The only thing he cares about is punishing the guilty, and that actually includes himself. That’s why he doesn’t make friends, and why his mission will never end. His war is his penance for failing to protect his family. Yet another interesting facet of the character completely ignored by the show in favor of giving him more “bonding time” with the teenage girl he is protecting. The girl being shuffled around like a Macguffin is a symptom of the show’s biggest problem: lazy, slapdash plotting. Even ignoring the double-cliche opener, the story continues to undermine itself in very obvious and stupid ways. For example, in a shootout with some ex-soldiers led by villain Billy Russo, Curtis points out that if Frank goes at them head-on, he’ll get torn to shreds before he gets close. Frank disguises himself in the jacket and mask of one of Russo’s comrades, then just walks into the middle of the street and starts screaming his name. He throws off his disguise before the shooting even starts, and is immediately pinned down and unable to get to his target, exactly as Curtis warned. So, why the hell did he even dress up in the first place?

Because a significant amount of The Punisher’s plot relies on characters acting brazenly stupid in order to progress. All of the adults in the story routinely leave a teenage girl, that they know for a FACT is being hunted by professional killers, alone and unsupervised in order to provide plenty of opportunities for the villains to kidnap and threaten her throughout the season. Curtis does this twice, despite being painted as the only rational one in Frank’s circle. Even the main villains are not immune—although they have access to the best mercenaries obscene wealth and power can buy, they decide to entrust their vital political coverup to a former Neo-Nazi punk that found Jesus, whose only qualifications seem to be that he used to enjoy violence.

The worst offense is Billy Russo’s “brilliant” plan for revenge on Frank (spoilers). After learning the Punisher’s psychological weakness from his therapist, he concocts a plan to break Frank Castle. He lures the Punisher to his secret lair so his goons can ambush him and bring him within an inch of his life, literally choking on his own blood, but not kill him. Because the next part of the plan is for Frank to get up, despite being at death’s door, and murder several henchmen in a running shootout through the building before open-firing at an office and inadvertently killing three women.

All of that had to happen exactly that way to trick the Punisher into believing he had broken his code. While this is the most interesting concept the show has introduced, the subterfuge unravels as soon as basic forensics come back, proving that Russo had actually killed the women before Frank ever got there. Our villain’s ludicrously convoluted revenge plot broke the Punisher for less than an episode. As soon as the evidence exonerates Frank, the show completely forgets that he easily could have killed those women by opening fire into a room he could not see inside, something a trained soldier would know not to do. Forcing Frank to grapple with his core beliefs would have made for some interesting character development, but instead we spend a tedious amount of time watching Russo suffer through his shattered self-image. I would be remiss if I did not point out that on a show that is trying to speak to veteran’s issues, making the only mental health professional a deceitful villain is not only cliche, but also dangerously irresponsible.

In one episode, as they are debating their next move, Curtis comments that Frank has trouble standing still, and it shows, thanks in no small part to Jon Bernthal’s excellent performance. Frank is surly when questioned, and his hand twitches every time he has a conversation longer than thirty seconds, just itching to get back into action. The same is true of the show. When it’s in motion and Frank is in the kill zone, The Punisher knows exactly what to do. The fights are visceral, brutal, exciting, and they make sense. It’s when the show has to slow down long enough to think about what it’s doing that everything starts to fall apart, because it fundamentally misunderstands the appeal of its protagonist. Sadly, the best Punisher show you can watch right now is Season 2 of Daredevil, and it looks like it will continue to be that way for some time.