The Banality of Evil In Fiction 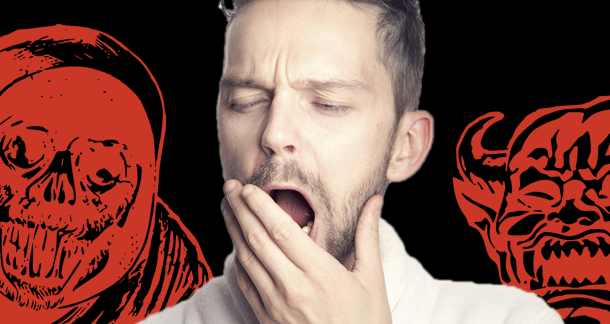 Just in case you don’t feel like reading this whole article, let’s get this out of the way: Don’t write a character who’s evil because “he has an uncontrollable lust for power.”

That shit is boring. There’s no story in it.

I’d love to tell you more if you’ve got a minute, but if you're busy, just know that a character who is evil because he’s a power-mongering evildoer is a snooze.

Hey, you stuck around! Good on you. And me.

Evil in fiction is under-discussed, even though for every hero, we've got a villain. For every good deed, there's at least one evil plot.

Why don't people think through evil a little more?

Let’s talk about evil in fiction, how to spice it up, and what to stay far, far away from.

This, readers, is where we find the difference between A Story and A Thing That Happened.

These are your old-school James Bond villain types. People who make moon bases as a step towards…something more spectacular than a moon base?

Yes, I know, I know, there are real-life examples of people who seemingly want to boost their power (bank account) beyond any reasonable measure and for no real reason. This, readers, is where we find the difference between A Story and A Thing That Happened. That's another column for another day.

When your villain is driven mad by a quest for power, your hero and your villain (assuming the villain is the evil one) don’t really have any personal beef, they just have opposite goals. It feels like they’re both punching in to fight each other for a chapter, then they punch out and go drink at the same bar.

Here’s how you address the generic lust for power: Start the story once the villain has already achieved their dastardly plan. Let us see what the villain does with all that power. The rise to power has been done, but the hovering in the power seat? Not so much.

Let’s look at the Emperor from Star Wars.

The drama of someone trying to rule the galaxy is just too big, and it’s not clear how the galaxy would be worse with Palpatine in charge. Or whether it would. Or what that would even look like.

Blowing up an entire planet is fucked-up, no doubt. But it's so vast that it can't be personal. It doesn't resonate, it's not evil that we can feel in the gut.

The evil of forcing Vader to fight his own son, then to jump in and kill that son while Vader watches, THAT'S when the evil goes from generic to gut punch. When Palpatine laughs and smiles, when he takes real pleasure in killing Luke in front of his own father, THAT's something we can understand.

If your evil is gigantic in scope, express it in a scene in a much smaller way. It'll help.

In Avengers: Infinity War, Thanos wipes out half the population of the universe because he thinks the universe is overcrowded. Apparently he’s never driven west-to-east across Nebraska.

We all had the same thought: If you have a magic oven mitt that can do anything, and if you’re concerned about the universe having limited resources, why not double, or triple, the universe?

When an Avengers writer was asked this question, here’s what they said:

He didn't double the resources in the universe because that's not what he's trying to accomplish, and also because he's an unhinged, sociopathic supervillain who is basically on a holy crusade. Thanos' plan only has to make sense to him, and in terms of fitting his character, it's perfect.

Okay, so the real reason Thanos doesn't go the other way is because there'd be no movie. Got it.

When evil exists for the metafictional purpose of creating a story, it'll taste as stale as a three-day-old bagel.

We all know about Occam’s Razor and its ability to help us solve mysteries, but fewer know of Hanlon’s Razor:

Never attribute to malice that which is adequately explained by stupidity.

Real life example: Most fender benders aren’t about someone trying to do you harm. They're about driving in a stupid way.

Let me ask you which character is more interesting:

A character who does evil things for a grudge he’s held for 20 years, or a character who has made a very bad, very thoughtless decision, and that bad decision has put the character in the villain's chair?

Stupid action, even with non-evil intent, can easily bring about an evil outcome.

There’s a great section in World War Z where a guy named Redeker comes up with a plan to evacuate a portion of South Africa after the zombie outbreak.

The plan is to leave pockets of people behind. They’d be occasionally resupplied, but ultimately their purpose is to distract the zombies and keep them from moving towards the safe zone.

He’s evil, but only because he’s willing to do something extreme.

Where it gets downright maniacal is when you see that at the core of the plan, able-bodied people with the skills to rebuild society are selected to go to the safe zone, and people who don’t fit those criteria are left as bait, sacrifices to the zombie hoard. Which means old people, sick people, disabled people, or people without useful skills.

The Redeker plan works. It’s cold, it’s calculating, and it saves lives, maybe even the entire southern portion of the African continent. But at a tremendous ethical cost.

Pragmatism can be a great version of evil. It lets your villain do something bad, but for reasons that…actually make sense. Redeker makes a great evil character. He’s evil, but only because he’s willing to do something extreme, willing to see people as numbers and resources. He is evil, and he does an evil thing, but it might have been necessary.

As a note on this: Your evil person doesn’t have to be unfeeling or even totally on board with what they’re doing. They can just be the person with the knowledge and power to do the evil thing. They can be in an extreme circumstance where they view their actions as a difficult choice, emotion versus pragmatism.

In The Walking Dead comics, Robert Kirkman learned over time, and he perfected evil.

The first straight-up evil character is The Governor. He makes people fight in an arena, he’s a rapist, he kills people left and right, mutilates a main character, he’s incompetent, he’s just the worst in every possible way.

Then Negan comes along. Negan seems more evil in some ways. He puts no value on human life. BUT, he does not tolerate sexual assault. Rapists he encounters don’t come out alive. He also doesn't just kill people for no reason.

He's plotting, he's extreme, he's violent, but he's not evil in all the ways.

Way too many evil characters are evil in every possible way. It’s like, if there’s a checklist of ways to be evil, you don’t have to hit all of them, and in fact, if you pick and choose, it gives your character a little something.

In the Simpsons episode “You Only Move Twice,” Homer goes to work for Hank Scorpio, who turns out to basically be a James Bond villain.

What makes him memorable is that he’s SUPER high energy.

Too many evil characters are morose loners who mope around and ooze evil. Frankly, in the real world, I’d prefer that. Sad sacks probably won’t accomplish quite as much evil as charismatic people who love to lead groups.

Wouldn’t you like to read a comic book where Lex Luthor was a high-energy go-getter? Sure, he’s trying to kill Superman, but all his employees’ desks double as ping-pong tables, and he’s cured a bunch of diseases, Metropolis’ public schools all have more useful technology than they can handle.

Wouldn't it be interesting to read about a version of Dracula who really has a lust for life? Who loves that he's immortal? Who's having a blast?

Give it a ponder: Would my evil character be more intriguing if he had a personality?

Get World War Z at Bookshop or Amazon

I started playing casinos a long time ago. One way or another at first I was losing and getting nothing out of the game. It pissed me off and I decided to try to increase my chance of winning. I found out how to do it already at https://myurlpro.com/boosting-your-chances-to-win-at-a-casino-online/ only recently. Now I am trying to achieve it. I recommend players who are also faced with this to try to use this site to make the game more profitable.