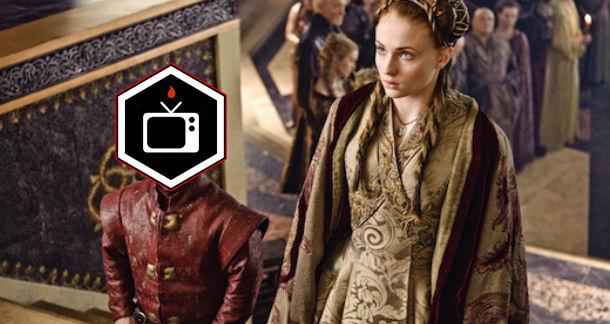 "Happy families are all alike; every unhappy family is unhappy in its own way." —Leo Tolstoy, Anna Karenina

Is there any family so uniquely twisted and dysfunctional as the Lannisters? Between the incest and the daddy issues and the entitlement and the raw, burning contempt in which they hold each other—if therapy existed in Westeros, they would all be in it.

Cersei had some wonderful moments in this episode, between her explanation of the song Rains of Castamere to Margaery, and the cold-shoulder she gave to Loras. Tywin was as threatening and spectacular as always. But this was Tyrion's show. It was excruciating, watching the indignities put upon both him and Sansa, as they were forced into the most awkward wedding ever.

And it was nice to see that Tyrion was willing to defy his father just enough so as not to bed a 14-year-old. Because, geez.

Oh, and just in case you forgot Joffrey was the biggest asshole in Westeros, here he is, threatening to rape Sansa, stealing Tyrion's stool so he'll be embarrassed during the wedding ceremony, and attempting to push Sansa and Tyrion into a bedding ceremony.

(The bedding ceremony, for those who haven't read the books, involves carrying the bride and groom to their chambers, stripping their clothes off along the way, and then standing at the door and shouting ribald things at them as they consummate their marriage. Hence Tyrion's unease at putting a 14-year-old girl through this.)

This is the part of the season, by the way, where I wish I could talk about what I think the end game is going to be for the final two episodes, or at least hint at the comeuppance some of these characters will experience, but I won't, because that would spoil the fun. But still, there's some crazy stuff coming up, I think. While watching last night's episode my wife remarked on something that she thought was a positive development, and I had to hold my tongue, because man, it will be the complete opposite of positive.

Daenerys continues to build alliances and prepare for the liberation of Yunkai, this time winning over a bunch of sellswords. Well, mostly she wins over Daario Naharis by being hot, and he kills the others. It's a little passive, considering how awesome she's been, though she's still pretty awesome as she just sits there and rolls her eyes at the advances of the Titan's Bastard, because of course this big threatening guy can not scare her.

And that was a great line, about how men who fight for gold can't afford to lose to a girl.

In trying to find the proper spelling of Daario Naharis' name, I poked around on a A Wiki of Ice and Fire and it seems like all this stuff with the sellswords and Yunkai happens a bit differently than in the books? Which is fine—my recollection is that it's all a bit convoluted and bloated.

Melisandre does not take Gendry in the books; she leeches Edric Storm, another one of Robert Baratheon's bastards (Robert Baratheon got around). So it seems that the showrunners gave Edric's story to Gendry, which makes a bit of sense. It saves us from meeting yet another character, and since we already know Gendry, the situation has a little more impact. It's a smart move on their part, to tame an almost-bloated cast.

Also, it's nice to see that Ser Davos is making progress in his learning to read, and that he's been let out of the dungeons. Though, has there ever been a man more loyal and understanding than Davos? Stannis, his supposed BFF, throws him in jail for logic, and Davos still brushes it off, noting that he's been in worse places and he's not even mad. Davos deserves a medal or something.

North of The Wall

Oh hey, remember that obsidian blade that showed up, what, halfway through season two? It finally came into play! Also, unlikely hero Samwell Tarly totally killed a White Walker, so good for him! This felt like it was a long time coming. And it was an incredibly creepy, effective scene, what with the murder of crows preceding the scary ice monster.

And while Sam does deserve a fair bit of credit, he probably should have stopped to pick up the blade, right? Because it seemed like he just left it there on the ground. Not smart, Sam...

Discuss! What did you think?

I liked how you used the word "suck" referring to Theon's situation right after you wrote about Gendry and leeches. Pun intended?

Game of Twos and Threes

Two happy-go-lucky Lannister kids –
Cersei informs future in-law Loras that if she ever refers to her as “sister” again she will have her strangled in her sleep.
Later a besotted Tyrion sinks his dagger into a banquet table just to let Joffrey know that if he insists on putting Sansa through the indignity of the bedding ceremony then the king will be servicing his soon-to-be queen with a “wooden cock”.

Melisandre mounts Gendry.  It seems it's more convenient to bind him to the bed from that position. Gendry can only wonder why she immediately dismounts.
Finding a wreck of a cottage to camp in for the night Sam despairs of ever lighting a fire.  Gilly suggests the better way to stay warm would be for them to share a blanket. Enter Sam's buddy from the first season, the head honcho of the white walkers.
Not overly impressed by his meeting with the Mother of Dragons, one of the Second Sons captains is very sure that soon he will obtain carnal  knowledge of her.

Two Second Sons noggins lacking bodies.
So much for getting into Daenery's pants.

Three leaches.
Suffice to say that when it comes to anything having to do with reproduction Melisandre is an outlier.

No mention of Arya and The Hound? I love how she pondered a while before dropping the rock.

I loved this episode, solid through and through, though if I had to make a complaint it would be that that Daario fella instead of having an awesome three-pronged beard they made him just another pretty faced white guy.

Didn't that obsidian blade white walker killing happen drastically different in the books, too? How does Sam get the nickname "Slayer" if no one was around to see it? I guess it's not that important, at least they made that whole scene creepy and awesome indeed, and it being the familiar Colonel White Walker was a nice touch.