Column by Joan Schweighardt November 4, 2021
In: 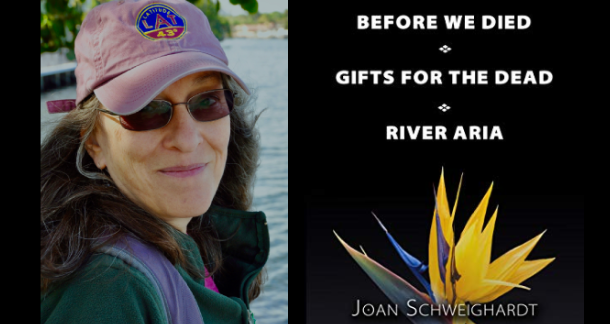 I went to an energy healer once, years ago, because someone had done me wrong and I could not seem to lift myself above my anger. I thought I would get to tell the healer all the gruesome details, but she didn’t want to hear them. She said, “That’s your story; it’s not you. I’ll be healing you. If you want to change your story, you’ll have to do that yourself.” I didn’t say so, but I was thinking, What do you mean, that’s not me? Of course it’s me! I had to live through it and now I own it! It’s mine! But in truth I knew what she was driving at. She was planning to heal the me that I run into occasionally when I’m meditating, the me that is part of the one that is all of us. Instead of listening to my rant regarding the me that is two parts flesh and three parts ego, she had me turn in circles, so she could see my aura from all angles. Then she had me lie on the healing table. (When I got up an hour later, my anger was gone! But that’s another story.)

Her remarks about our stories not really belonging to us were not meant to suggest that stories don’t have a place in our lives. In fact, making up stories is a great way to shrug off the ego—if you put them to paper or do one up as a painting. Even if you are creatively depicting something that is very much about your personal tragedy, once you begin to objectify it, you are already moving away from it. Joan Didion once said that while she didn’t necessarily write for catharsis, she had to write to understand.

Making up stories is a great way to shrug off the ego...

I discovered the thrill of making up stories when I was six or seven, though I didn’t bother writing them down back then. I had paper dolls, and since I liked to draw, I could make more paper dolls when I needed a larger community to work out a more complex theme. My paper dolls lived in shoe boxes outfitted with toasters and lamps cut out from my mother’s shopping catalogs. Their stories were rather like soap operas; they fell in love, out of love; they celebrated surprises, despaired over snubs…

When I got a little older (ten, eleven, twelve) I stopped using paper dolls to tell stories. Mostly I did fiction in my head, at night, as I lay in bed. I hated going to sleep back then; I didn’t see the point. Back in the paper doll days I had to be an omniscient narrator, because I couldn’t very well be a paper doll. But once I got to doing the stories in my head, I could be one of the characters. In my preteen stories I was a beautiful mermaid, swimming in a lagoon awaiting the arrival of Peter Pan; I was a beautiful Native American princess protected by handsome men on horses; I was a high wire trapeze artist working in a circus, swinging back and forth with other nimble performers. I would stay on a detail until I could visualize it, forcing my imagination to concentrate, concentrate until I could see the bad guys coming up over the hill or feel the cold metal of the trapeze bar in my white-knuckled grip. If I focused enough setting the scene, it might still be there the next night, and we characters could just start where we’d left off. But sometimes details slipped away and had to be reconstructed. And there were times when I simply fell asleep before I could get to the most important part of the story, the scene all the details were meant to support in the first place.

By the time I was a teen I saw the value of putting my stories on paper. I spent so much time at night going over what someone had said to me that day in school, and what I had said back—or, more often, failed to—that there was not enough time left to make up stories in bed. By then I was writing poetry, mostly about boys I liked and boys who were breaking my heart, but there were a few more interesting themes now and then too. I remember writing one long poem about my mother and all the sacrifices she had to make to take such good care of our family, which was riddled with challenges. Over the years, when I would get so angry at her, the lines to that poem would come back to me and help me to see her in a different light. 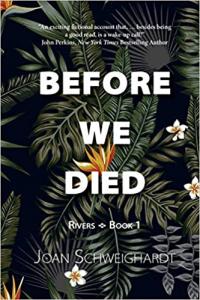 When I was in my early twenties, I decided I would make my living as a novelist. I started out writing short stories, and a few got published, but it took until I was in my thirties for me to write my first publishable novel. By then I had figured out that only a small percentage of fiction writers actually make a living writing novels and it was unlikely that I was going to be one of them. So while I went on writing fiction for the pleasure of it, I also continued to seek out jobs where I would be called on to write—copy for an ad agency, newsletters and press releases for a PR agency, etc. Once, when I was approaching forty, a man asked me to ghostwrite his true story of being misidentified and imprisoned in a foreign country. That was when I learned that I loved ghostwriting, and I have ghostwritten several books since.

I have had nine novels published over the years as well as a memoir. I’ve gotten some advances and won a few awards, but if you put all the money I’ve made with my own writing projects together, there wouldn’t be enough to buy a new used car. The money I’ve made working as a pen for hire, however, has enabled me to pay a lifetime’s worth of bills and put two children through college. What I love about writing is the process. It doesn’t matter so much whether it’s my story or yours.

With the exception of the memoir, my personal writing projects have been less and less about me over the years. The last three novels, a trilogy set over 100 years in the past, is not about me at all. Perhaps the energy healer I saw all those years ago would see it differently; perhaps she’d say the characters that fill these three books are all me, because we are all one. Either way, my life in writing them, in writing generally, has been a healing experience in so many ways. A common final question in interviews I’ve done is, What would you say to emerging writers? I might word it differently at different times, but essentially my answer is always the same: Lucky you!

Joan Schweighardt is the author of nine novels, two memoirs, two children’s books and various magazine articles, including work in Parabola Magazine. She is a regular contributor to Occhi Magazine, for which she interviews writers, artists and filmmakers. In addition to her own projects, she has worked as an editor and ghostwriter for private and corporate clients for more than 25 years. She also had her own independent publishing company from 1999 to 2005. Several of her titles won awards, including a Barnes & Noble “Discover Great New Writers,” a ForeWord Magazine “Best Fiction of the Year,” and a Borders “Top Ten Read to Me.” And she has agented books for other writers, with sales to St. Martin’s, Red Hen, Wesleyan University Press and more.

Her most recent work is the Rivers Trilogy—Before We Died, Gifts for the Dead and River Aria—which moves back and forth between the New York metro area and the South American rainforests from the years 1908 through 1929.

Joan Schweighardt is the author of the Rivers Trilogy—Before We Died, Gifts for the Dead, and River Aria—and other fiction and nonfiction titles.