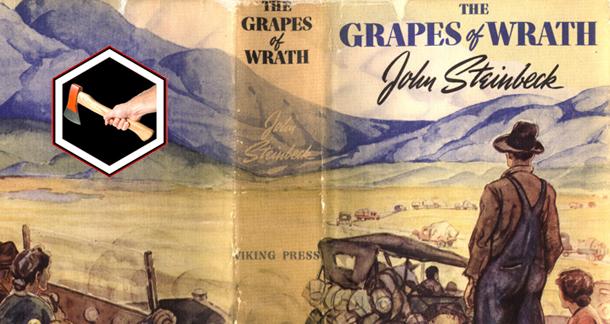 It was bound to happen eventually, classic cullers. After 14 months and 13 successfully culled classics, I have for the first time abjectly failed in my monthly mission. It's incredible that it didn't happen sooner, with books like Anna Karenina and Moby-Dick; or, The Whale successfully culled despite their 600+ pages. It wasn't even a Russian who finally took me down, but an American, and one that I've read (and liked!) before.

All good things come to an end, however, and my run of reviews has met its match with this month's selection.

The Grapes of Wrath, by John Steinbeck (The Viking Press-James Lloyd, 1939)

Considered one of the greatest American novels ever written; winner of the National Book Award and the Pulitzer Prize for Fiction, and cited by the Nobel Prize committee as one of their main reasons for awarding Steinbeck the 1962 Nobel Prize in Literature; Goodreads rating of 3.87; #10 (board) and #22 (readers) on Modern Library's 100 Best Novels list.

As far as I can tell, a man gets out of jail and discovers that the world has become very dusty.

When Joad heard the truck get under way, gear climbing up to gear and the ground throbbing under the rubber beating of the tires, he stopped and turned about and watched it until it disappeared. When it was out of sight he still watched the distance and the blue air-shimmer. Thoughtfully he took the pint from his pocket, unscrewed the metal cap, and sipped the whisky delicately, running his tongue inside the bottle neck, and then around his lips, to gather in any flavor that might have escaped him. He said experimentally, "There we spied a nigger—" and that was all he could remember. At last he turned about and faced the dusty side road that cut off at right angles through the fields. The sun was hot, and no wind stirred the sifted dust. The road was cut with furrows where dust had slid and settled back into the wheel tracks. Joad took a few steps, and the flourlike dust spurted up in front of his new yellow shoes, and the yellowness was disappearing under gray dust.

He leaned down and untied the laces, slipped off first one shoe and then the other. And he worked his damp feet comfortably in the hot dry dust until little spurts of it came up between his toes, and until the skin on his feet tightened with dryness. He took off his coat and wrapped his shoes in it and slipped the bundle under his arm. And at least he moved up the road, shooting the dust ahead of him, making a cloud that hung low to the ground behind him.

There is an entire chapter devoted solely to the slow crossing of an old land turtle across a dusty paved road.

The Grapes of Wrath is 30 chapters long. I read five of them. It took me almost three months. An old land turtle could literally make his way across a dusty paved road faster than it takes Steinbeck to tell us about it happening. It's like some kind of old-timey joke:

Friend: "Why did the chicken cross the road, John?"

John Steinbeck: "Oh, well I'm not sure, but if you give me a couple pages, I could certainly describe how he did it. But can I make it a turtle instead?"

Friend: "Sure, John, knock yourself out."

...but clearly that's not going to stop me from doing so anyway. Obviously there's a reason why this book felt so much like a chore, like a homework assignment. The prose is beautiful in all of its oppressive Dust Bowl seriousness, but it's just soooooo sloooooow. It was such a joyless read. Does Steinbeck perfectly describe the pitiless choking sensation that a barren environment delivers, the merciless cruelty of such a harsh landscape? Absolutely. A+ on the dust empathy, JS. The thing is, I've seen dust. I know what dust is. I know it's shitty and terrible and in general if your life is 99% dust then your life probably sucks. Life as a farmer during the Dust Bowl did, in fact, suck, so again, well done, Johnny Boy. I don't want to read about how shitty dust is over and over and over and over again, though. That horse is long dead (probably from choking on a dust cloud), so stop beating it with your dusty yellow broom.

I don't want to turn this into a Culture Thing, because I've read long books before. The Internet has perhaps eroded my patience just as much as drought, dust storms, and over-farming eroded fertile land in the Midwest in the early part of the 20th century—even this analogy feels slow and labored—but I'm not willing to concede just yet that we live in an era where books can't be appreciated primarily because of their prose. Anna Karenina is a long book filled with beautiful prose that I found incredibly enjoyable. One Hundred Years of Solitude is several hundred pages of beautiful descriptions and wordplay, and time is played with so much that it's nearly impossible to make out a plot. The Grapes of Wrath, though, is this weird amalgamation of plot and prose, a slow-motion playback of the most depressing part of the last 100 years. I liked The Pearl and Of Mice and Men, both of which are Steinbeck books that make great use of the era the author lived through, but I just can't with this dusty sadness.

We've never as classic cullers dealt with a situation where the "You'll Love It" and "You'll Loathe It" sections played such an important role. If you can read those two "You'll Love It" paragraphs without drifting off and thinking about whether you need to do laundry this weekend, then you might really enjoy The Grapes of Wrath. I hear it's a fantastic book. If you can't imagine yourself sitting through an entire chapter of a turtle crossing a road, though, then maybe this one isn't for you. It wasn't for me, and I accept that. It's sad, and maybe I'm a little less impressive as a Smug Literary Omni-Reader for not being able to make it through one of the pillars of American literature, but it's something I'll just have to live with until I'm old and bored enough to try again.

If you've made it through to the other side and found yourself having enjoyed The Grapes of Wrath, then I take my old-timey cap off to you. Brush those shoulders off—not so you can brag or anything, but because it's an incredibly dusty fucking book. Droughts really suck.

I teach American Literature (English 11). I hate to admit this, but Of Mice and Men was one of the slowest and most torturous reads I've ever experienced. Because I struggled to get through that tiny book, I never branched out to read anything else by Steinbeck. One of my co-workers teaches several Steinbeck works to his freshman. He always tells me I need to read these works, but I can't seem to do it. I love the films for Grapes of Wrath and East of Eden. The books are on my bookshelf. Just can't bring myself to read them.