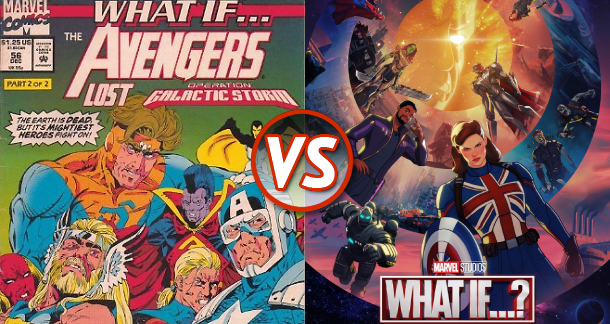 “What if…?” is the foundational question of all fiction. Every story is born when an idea strikes a creator and they ask themselves: “What if… something interesting happened?” And then they must write an answer. That simple but important question is both the title and the premise of one of Marvel’s most consistently interesting comic book series.

The very first comic book I ever read was What If the Avengers Lost Operation Galactic Storm? It totally blew my eleven year old mind. Partly because I hadn’t read any of Operation Galactic Storm, and thus had no idea what was going on. But mostly, it was the kind of story I didn’t think you were allowed to tell. It was relentlessly bleak, and offered no happy ending. These were characters I only knew from the safety of Saturday morning cartoons, but then I opened this book and Earth was annihilated in a cosmic holocaust before I hit page five. Many popular characters (including Iron Man!) were dead by page ten, and the rest continued to drop at a steady pace. The survivors planned a dire and desperate resistance that seemed doomed to failure. The heroes committed a warcrime to avenge the obliterated Earth, and the villain killed himself rather than admit defeat. It ended in a Pyrrhic victory on a fairly hopeless note. I absolutely loved it.

In terms of adaptation "What If…?" is as accurate as it gets. It’s a show of big ideas that revels in the fun of its wacky premises.

Over the decades, I bought more issues of What If…? than any other Marvel series not titled X-Men. In those books, writers penned crazy stories free of the constraints of canon and continuity. Absolutely anything could happen—the entire world could be destroyed before the end of the prologue, or the narrator might decide to intervene in the tale he’s telling. Beloved characters can fail, and even die. While there’s no limit to the kind of stories that can be told in the pages of What If…?, many of them postulate alternate versions of major Marvel events. Ever wonder what would’ve happened to the X-Men if the Phoenix hadn’t died? Or perhaps you want to know what would be different if the Silver Surfer managed to take the Infinity Gauntlet from Thanos? Maybe you just want to know who would win in a no holds barred fight between two characters that have never met. What If…? has answers for you.

That’s what makes What If…? the perfect choice for Marvel’s latest animated offering. They’ve made some of the most popular movies of the last decade—even people who aren’t invested fans have at least conversational knowledge of the Marvel Cinematic Universe. These characters have established themselves in the cultural consciousness in a way that’s comparable (if not yet equal) to Sherlock Holmes and other darlings of the public domain. The average audience is now familiar enough with the source material to be entertained by alternate takes and innovative riffs on these popular stories.

The What If…? show is an anthology of stories speculating about characters and events from the MCU. It captures what makes the books so fun and translates it into gorgeous animation, like a playground debate brought to life. There are about a dozen basic types of What If…? stories, and the show manages to touch upon most of them in just nine episodes. We get a double dose of “What If Someone Else Became the Hero?” in the first two with Peggy Carter and T’Challa becoming Captain America and Star-Lord, respectively. That second episode made me wish I lived in the universe where Chadwick Boseman starred in Guardians of the Galaxy. Then there’s a “What If a Good Guy Became a Bad Guy?” that turns Doctor Strange into a tragedy of Shakespearean proportions, a “What if the Bad Guy Won?” featuring Ultron and the Infinity Stones, and we finally get to see who would win a fight between Thor and Captain Marvel. Even the perennial fan favorite, “What If Zombies?”, makes an appearance. With the help of Uatu, the series’ omniscient narrator, even those unfamiliar with the MCU can enjoy these bite-size adventures. And because it’s a Marvel show, these stories eventually assemble a meta narrative that is much more than the sum of its parts. It’s a mini-Avengers in nine 30-minute episodes instead of 26 feature-length films, a much more manageable commitment for the unfamiliar.

In terms of adaptation, What If…? is as accurate as it gets. It’s a show of big ideas that revels in the fun of its wacky premises. And it looks amazing, with an art style that fuses old school comics with classic Disney cartooning. I don’t think Marvel has ever translated a comic book into animation so faithfully. If we’re lucky, this is just the first of many installments exploring the depths of the Marvel Multiverse.

Get What If...? The Original Marvel Series at Amazon