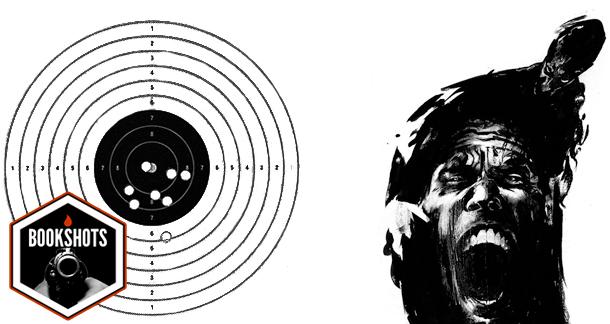 Corey Taylor, who is probably best known as the lead screamer for Slipknot and Stone Sour. Comic artist Richard Clark, who has drawn everyone from Batman to the Hulk, provides the pictures.

The Human is totally having a bad trip. He can’t remember who or where he is. He’s been plunged into the middle of a nightmarish landscape where the only way to survive is to engage in philosophical debates and fights to the death with abstract personifications of his inner demons.

The Worst Trip I Ever Had

The Human, whose name might be Jim or Zero, a guy with self-worth issues on some seriously bad acid.

Said Lead Would Be Portrayed in a Movie By:

Keanu Reeves, a man who has made a career out of looking like he has no idea what is going on.

A twisted dreamscape where everything wants to kill you or torture you with memories of your deepest traumas and regrets. Sounds lovely.

Look at the little monkeys trying to write Shakespeare! Fuck you! Embrace the chaos and fulfill your destiny!

Clark’s artwork is as amazing as expected. His images are terrifying and vivid, and if this book is remembered at all it will be in the nightmares of all who see his art. Sadly, the story cannot match the quality of the illustration. The whole “Man vs. Self” struggle depicted as an epic battle between demons has been done more memorably countless times before. The Human is hardly a compelling protagonist, as all of his dialogue can be boiled down to expressing two sentiments:

We don’t know anything personal about the Human (except his favorite curse words) until the end, so it’s hard to care about what form his inner thoughts take. It feels a lot like listening to one of your coworkers explain a dream they had in tediously exacting detail. If it’s not your dream and you don’t know the person, all that subconscious symbolism is meaningless. House of Gold & Bones also doesn’t work as just a suspense/horror story because it’s pretty obvious that the whole thing is a dream or hallucination from the beginning, which removes any sense of urgency or peril from the story. There are no stakes—if he doesn’t realize the flaming serpent guy represents his dark side (what else could it possibly be?), then what? Does he die? Never wake up? Or wake up as an evil version of himself? Shit, was he even good in the first place? There’s no way to know, so it’s hard to work up much enthusiasm for the conclusion.