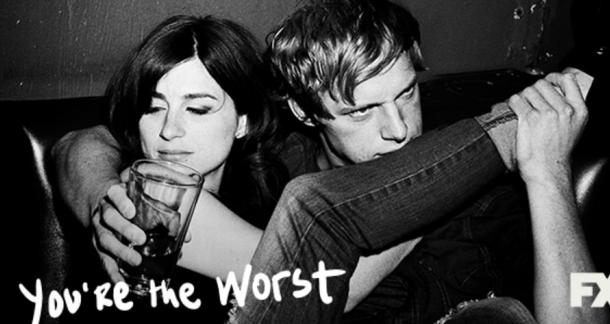 If I told you a show existed that focused on two narcissists in a relationship, you would probably tell me, hey, that sounds kind of boring, and you’d have a point. When I first read about Stephen Falk’s You’re the Worst, I felt zero interest in checking it out. But eventually I grew tired of Bob’s Burgers reruns and gave it a try. Not only did I discover a new entertaining show, but I also discovered a multitude of writing lessons just waiting to be uncovered and exploited into a cheap listicle. So, here’s the skinny:

10. Characters come to life when they are at their ugliest

Jimmy: You're not on antidepressants?
Gretchen: Shit, no. I don't want to lose my edge.

You’re the Worst tells the story of Jimmy Shive-Overly, a British writer living in Los Angeles, and Gretchen Cutler, a music PR executive. They’re both generally terrible people. Unlikable assholes that you can’t stop watching. They’re perfect for each other because nobody else could possibly love them. Both characters are deeply flawed, and it is through this shared connection of fuckedupness that they grow attached to each other. You can’t know a human being until you’ve seen them at their lowest, and You’re the Worst is all about drowning their characters in pools of shame. If you want your characters to be realistic, you must add layers upon layers, and some of these layers can’t all be likeable. Nobody on this planet is 100% perfect. In fact, most of us are dicks. Embrace it.

09. Relationships need to seem authentic, otherwise readers will never buy into them

Gretchen: I am going to the bathroom. And when I get back, you're going to take me to a real bar and feed me cheap whisky until I forget about that time that I stopped being able to have sex with my boyfriend ever again because he took me to a bar that only served water!

Something that absolutely kills me with movies and books are relationships that don’t make any sense. People forced together by the author to progress artificial storylines. The best writers understand human beings and are able to believably pit two characters together and make their romance real. The writers behind You're the Worst have succeeded in creating a thorough balance with Jimmy and Gretchen that’s neither overly affectionate nor overly hateful. These characters actually have fun together, which is something authors easily forget when writing love stories.

08: The more elaborate your writing process, the less you’ll get done

Jimmy: Writing is very seldom actual writing. Maybe on the outside it looks as though I’m drinking and playing darts and eating craisins out of a bag in my pocket, but this is part of the process. It’s all writing. And I need you to respect my process.

I read a lot of writer interviews, and something that’s always baffled me is the complexity of certain writing rituals. People get a bit crazy obsessing over the perfect series of actions that’ll guarantee brilliant work. The longer you focus on how you write, the less time you will have to actually write. Stop giving a shit about your surroundings and just dig in—food's getting cold.

07. Destruction comes from obsessing over what’s already published and neglecting what’s next

Similar to the last entry, but only really counts for the writer who’s already gotten something published. In You're the Worst, Jimmy has one novel out already, and it was not exactly widely acclaimed. In the first season, instead of working on his second book, he’s instead shown stalking bookstores and reorganizing his own book’s placement on the shelves. These scenes make me laugh, because I’ve done the very same thing, and I know others have as well. But once something’s out in the world, there’s no changing it. Just let it be. You’ve raised it as well as you were able to, now it’s time for it to find its own place in the world. Go back home and start working on another baby, you handsome stud you.

Strasburg: Critique me.
Jimmy: Okay, well, the image of the endless Costco aisle seems somewhat derivative of DeLillo.
Strasburg: Get out.

With my forthcoming novel, The Nightly Disease, I learned the importance of seeking out beta-readers before submitting work to publishers. I owe so much to the kind souls who read over my manuscript and helped shape it into the book it is today, and I believe more books could benefit from this act. In season three of You're the Worst, Jimmy gathers around an entire block of strangers for advice on his manuscript. The less you know your beta-reader, the more honest their opinion will be.

05. It’s very easy to lose yourself to narcissism

Killian: You want to hang out sometime?
Jimmy: What? What are you even talking about? I'm an adult. Do you know what that means? It means that I am beset upon at all times by a tsunami of complex thoughts and struggles, unceasingly aware of my own mortality and able to contemplate the futility of everything and yet still rage against the dying of the light. So do you see how monumentally stupid you, a child, asking me "do I want to hang out sometime" is?
Killian: My dad designs video games. We get all the new ones early.
Jimmy: Come over around 8:00.

If you’re a writer, you’ll struggle between hating everything you’ve ever done and believing anything you write is the best goddamn work anybody’s ever read. Please focus on hating your work. Nobody likes an ego. If you think you’re already a god, then you will cease attempts of improvement.

04. Your side-characters are also protagonists

Lindsey: I’m not a sidekick! I’m Beyoncé, not Kelly Rowland. If I’m on a motorcycle, I’m driving the motorcycle, not riding in that shitty little side motorcycle thingy for poor people and dogs.

Nobody thinks of themselves as a sidekick. Everybody is living their own stories. The quicker you realize that, the stronger your writing will become. Your job is to put yourself in the shoes of not just one person, but every human being on this whole stupid planet.

03. Your characters cannot be fixed

Gretchen: You need to stop. It's like you have amnesia. Every day you think things are going to be different and I'll just be happy. Well, maybe you can understand this: I feel nothing. About anything. Dogs, candy, old Blondie records, nachos, you, us, nothing. So for the last time...please GO.

People are who they are. Most of them are messed up. But they’re human beings, not toys. They cannot be fixed with a series of magical words. You must keep this in mind if you want your fictional (and nonfictional) relationships to come across as true and not some Hallmark cookie bullshit.

02. Procrastination is not writing

Gretchen: But you spent the last two months drinking and jerking it to the Lane Bryant shoe catalog.

It’s much easier not to write than to write. It’s okay not to write. Nobody’s forcing you. But don’t call “sitting around playing video games while thinking REAAALLLY hard” writing. Put pen to paper, motherfucker. Make words.

01. You will never be satisfied

Writers will set impossible goals. Even when we achieve them, there will remain an uneasy feeling of dissatisfaction, because no matter what, you know you can do better. This feeling is normal, and it will help you become a better writer. As long as you are continuously attempting to outdo your last work, then you still have a purpose. Do not settle for mediocre. Write like you have three months to live. And when you finish your book, maybe you’ll get it published. The book comes out and it’s everything you ever hoped for, but something isn’t right. You still feel like shit. You can do better. So you try again, and again, and you don’t stop, you never stop. Satisfaction is an illusion that we must never stop reaching for, or else we’re fucked.

Have you seen You're the Worst? Let us know your thoughts in the comments.

I happen have the pleasure of knowing Stephen Falk, and there is a reason, besides his creative talents, that he's been so successful in his career as a writer...he writes!  He writes and writes, and then he writes some more.  In other words, his process could not be further from that of the fictional Jimmy.  Stephen sets a rigorous routine for himself, working 8+ hours a day when he's not busy with his show-running duties, even when he has some down time between projects or seasons of YTW.  He'll get up, get dressed, drink a gallon of Pete's coffee (shout out!) get to the nearest coffee shop (note, do not try to work from home- too many distractions) and hunker down on his laptop.   He's one of the most disciplined people I know.  Mad respect.

Also, nice piece, solidly written with genuinely helpful advice.  Sadly, I read so many blog posts and other pieces of online writing that contain grammatical errors and typos.  How difficult is it to do a quick proofread before putting something out to print?  Btw, I esp. enjoyed the quotes from YTW.  Cheers!