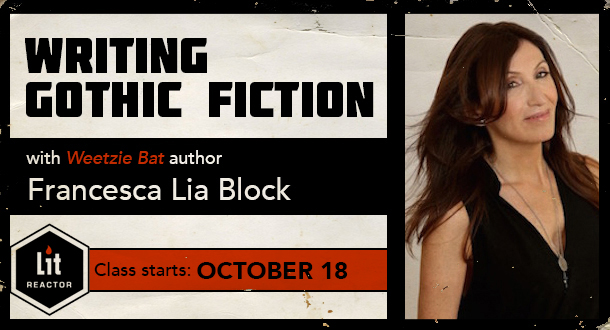 In this four-week course and workshop, acclaimed author Francesca Lia Block will teach you the basics of how to write Gothic fiction, examining setting, character, plot, voice and theme.

Francesca is the author of over twenty-five acclaimed and award-winning works of fiction, non-fiction and poetry, including the memoir/writing guide The Thorn Necklace: Healing Through Writing and the Creative Process and the cult classic Dangerous Angels: Weetzie Bat Books.

In this course, you will study how to develop sympathetic Gothic characters with strong antagonists (the “Demon Lover”). Then you will choose a “Dark Secret” around which to develop your plot. On the third week, you'll learn how to create the “Dark House” Gothic setting.  Finally, you will discover secrets to a strong Gothic voice and theme.

Each week includes a lecture, a writing assignment, to be critiqued by Francesca and your peers, as well as ample opportunity for discussion.

A sympathetic protagonist needs a want, a need, a gift, a flaw and a strong, dimensional antagonist to begin to push them toward change.  In Gothic fiction this antagonist is often a “Demon Lover.”

Plot is conflict that emerges out of a character’s relationship with his or her antagonist, usually one who harbors a secret of some kind. In Gothic fiction, this “Dark Secret” may involve violence or sexuality and may have supernatural or apparently supernatural overtones.

Setting can provide conflict as a reflection of the character’s struggle. It can also be a character in its own right. In Gothic Fiction, the “Dark House” can be a literal haunted mansion or castle, or any place that expresses the shadow side of the characters in some way.

Narrators in Gothic Fiction are often unreliable, providing more tension for your story.  Themes of confronting (or avoiding) the shadow also add complexity and tension.

In this class, students will learn:

Francesca Lia Block, M.F.A., is the author of more than twenty-five books of fiction, non-fiction, short stories and poetry. She received the Spectrum Award, the Phoenix Award, the ALA Rainbow Award and the 2005 Margaret A. Edwards Lifetime Achievement Award, as well as other citations from...

What Students Are Saying

"Magical Realism was a pretty special class for me. I've followed quite a few LitReactor classes, but nothing quite as special as this. To me, Francesca's is a prime example of everything that's unique about LitReactor: privileged access to an incredible storyteller, teacher, and mentor. But also Francesca teaches you how to trust your voice, how to structure a story so that it's accessible, and she's both incisive and supportive with her comments. But also, maybe most importantly, is how Francesca shows you to open up and be vulnerable, and how that vulnerability can change your writing for the best, if you take that risk." —Hughes D.

"I signed up for Francesca’s workshop because I was feeling kind of lost after completing my first draft of a coming-of-age novel. Not only did Francesca, and her deep questioning, help me to reconnect with the thread of the story that I had lost, she also helped me believe in my own work. Her feedback is laced with compassion, appreciation and respect. Highly recommended." —Angela K.

"Block is truly inspirational. Comments from other students in her class about my work were more helpful than any other class (online or otherwise) I have ever had. This was a combined function of a great group of students and the atmosphere Block creates." —Don L.

"Fairy Tales as Inspiration exceeded my expectations.  Through well-planned lessons, discussions and assignments, I was able to polish a work-in-progress in 4 short weeks.  I found my work benefited by reading and discussing the work of classmates, providing ideas and inspiration.  I wasn't ready for it to end." —Don W.

On The Thorn Necklace:

"The Thorn Necklace is a 'grimoire,' a meditation on turning agony into art, at the same time that it functions as a guide to being creative. Block viscerally shows how she has taken the setbacks of her own life ...and transformed them into literature that has ultimately inspired and sustained her readers....Mesmerizing."―Los Angeles Review of Books

"Francesca Lia Block turns her unique punk-fairie style in a new direction in this fast-paced memoir of hope, disaster, magic, and sheer raw talent, mated with a down-to-earth approach to writing. This double dose of Block, as teacher and writer, is a combination sure to enchant and inform." —--Janet Fitch, bestselling author of White Oleander and The Revolution of Marina M.

"A moving memoir and a wildly helpful guide to fiction writing. Francesca Lia Block demystifies the creative process in a way that makes the world feel magical." -—Chris Baty, author of No Plot? No Problem! and Ready, Set, Novel and founder of National Novel Writing Month

"In this lyrical and haunting meditation on the craft of writing, Block...cracks open her psyche and lays it bare in the hopes of inspiring other storytellers-to-be. Wise and inspiring, this is a must-read for artists of all stripes."―Booklist **starred review**

On The Weetzie Bat Novels:

"[Block] is the sorceress of iridescent language."—Kirkus Reviews

“Magic is everywhere in Block’s lyrical and resonant fables. At once modern and mythic, her series deserves as much space as it can command of daydream nation’s shrinking bookshelves.” —Village Voice

“One of the most original books of the last ten years.” —The Los Angeles Times Book Review