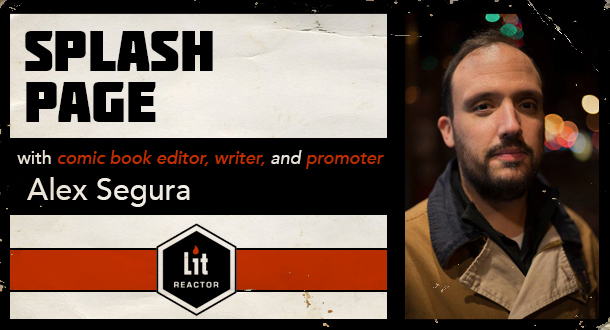 How do you take your comic book idea from concept to four-color reality?

Compared to comics, book pitches are easy! When it comes to a book, all you need is a query letter and some sample pages. Maybe a synopsis.

For a comic, though—do you need a script? Artwork? How many pages? What format?

And once you're done, where do you send it?

We’ve recruited Alex Segura, formerly of Archie Comics and Oni Press, to walk you through the basics, from tightening up your concept, to whittling down what you include, to getting your pitch in the right hands.

Alex Segura is the bestselling and award-winning author of Secret Identity, which The New York Times called “wittily original” and named an Editor’s Choice. NPR described the novel as “masterful,” and it received starred reviews from Publishers Weekly, Kirkus, and Booklist. It was also listed as one of the Best Mysteries of the Year by NPR, Kirkus, Booklist, LitReactor, Gizmodo, BOLO Books, and the South Florida Sun Sentinel.

Alex is also the author of Star Wars Poe Dameron: Free Fall, the Anthony Award-nominated Pete Fernandez Miami Mystery series, and a number of comic books – including The Mysterious Micro-Face (in partnership with NPR), The Black Ghost, The Archies, The Dusk, The Awakened, Mara Llave – Keeper of Time, Blood Oath, stories featuring Marvel heroes Sunspot, White Tiger, Spider-Man and DC’s Superman and The Question, to name a few.

And he's here to offer his years of experience in the comic book industry, so you can take your idea and take steps toward making it a reality.

Alex will give you the tools to make your daydream get a step closer to reality. You'll write a sample pitch based on these discussions and he'll give you feedback.

You've got a pitch, what do you do with it? Alex will give you general guidelines on dealing with editors—including over email, at shows—as well as insider tips on what they look for. The class will conclude with a review of your revised pitch based on Alex's notes.

Alex Segura is the bestselling and award-winning author of Secret Identity, which The New York Times called “wittily original” and named an Editor’s Choice. NPR described the novel as “masterful,” and it received starred reviews from Publishers Weekly, Kirkus, and...

"Alex is an incredible teacher who gives invaluable feedback! His guidance helped me learn the how-to’s of writing a pitch in the comic book/GN industry in a short amount of time. You will leave his class with confidence and the ability to pursue opportunities in the industry." —Rosario M.

“Alex’s Splash Page class exceeded any and all expectations I had. I went in hoping to walk away with a fraction of his knowledge and ended up with that AND a viable graphic novel pitch. Highly recommended.” —John Vercher, Edgar Award nominated author

"Alex's class not only provided great details about the publishing business, it also helped make my story better. His insider knowledge plus his creative chops are a great combination." —Richard Santos, author of Trust Me

“I’ve done work for hire gigs in the past, and was nervous about branching out into creator owned territory. Alex’s class helped me identify ways in which my story could grow, and now I’m a few short days away from sending out the finalized pitch!” —Eli S.

"I took SPLASH PAGE this summer to refine a pitch that I'm nearly ready to shop. Getting immediate feedback from someone with the experience of Alex Segura was instrumental in shaping my pitch. If you have a project that you want a special look at, I recommend this class greatly!" —Dan Gvozden, writer and co-host of The Amazing Spider-Talk, Spider-Man expert

"Alex Segura's SPLASH PAGE class allowed us to focus our pitch into a well-crafted story bullet. He should charge more for his invaluable insights! Without his help, Jupiter Jet would not be heading into a second Ringo nominated volume." —Jason Inman, writer/co-creator, JUPITER JET

"By taking this class, I was able to refine my ideas and focus them into something I’m really happy with, and I'm confident it can become something worthy of publishing some day. Alex is a great teacher and I really appreciated the chance to work directly with someone in the comic industry who can give much needed constructive criticisms." —Bryan R.

"SPLASH PAGE is simply fantastic. A rare opportunity to hone your pitch with a true industry giant. If you want to get published in comics, this LitReactor course is for you!" —Evan K. Pozios, Writer & Creator of Time Grunts, Johnny Phantasm, and Silence

"Splash Page was focused, practical, and fun, with an unmistakably positive energy. There was an instant camaraderie in the group, and Alex's feedback was incisive, generous, and extremely helpful, not only with crafting my pitch but also with improving my story." —Michael Northrop, writer of Dear Justice League